This moving love story, simply put, was meant-to-be. At only 15 years old Lizzy told her Dad, that she would one day marry an Edwards Boy. A year later from their first date, they got married, she married Dan Edwards. 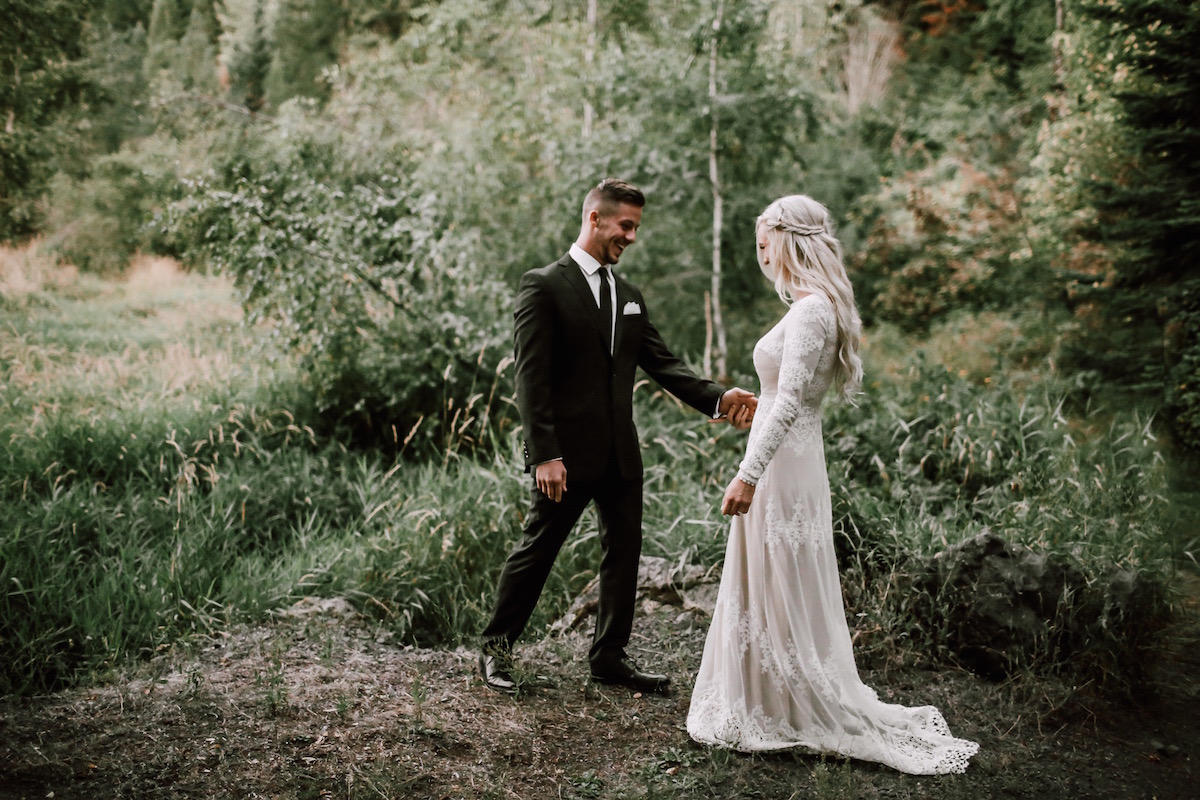 I had the pleasure of watching a beautiful, 4 minute video of Lizzy and Dan’s Spokane wedding, courtesy of the The Cayve Film Co.. Besides the breathtaking fly-over of the reception venue, in a gap between the orchards, right next to the golden wheat fields at sundown…it was the obvious chemistry between these two that really took me aback. The way they seem to stare into each other’s souls, in fact, the air of romance throughout the entire 4 minutes was more like something you’d expect from a Hollywood movie than a real life wedding film. As I went on to learn about Dan and Lizzy’s unique love story, I started to understand where all that chemistry came from: this one was quite simply meant to be! 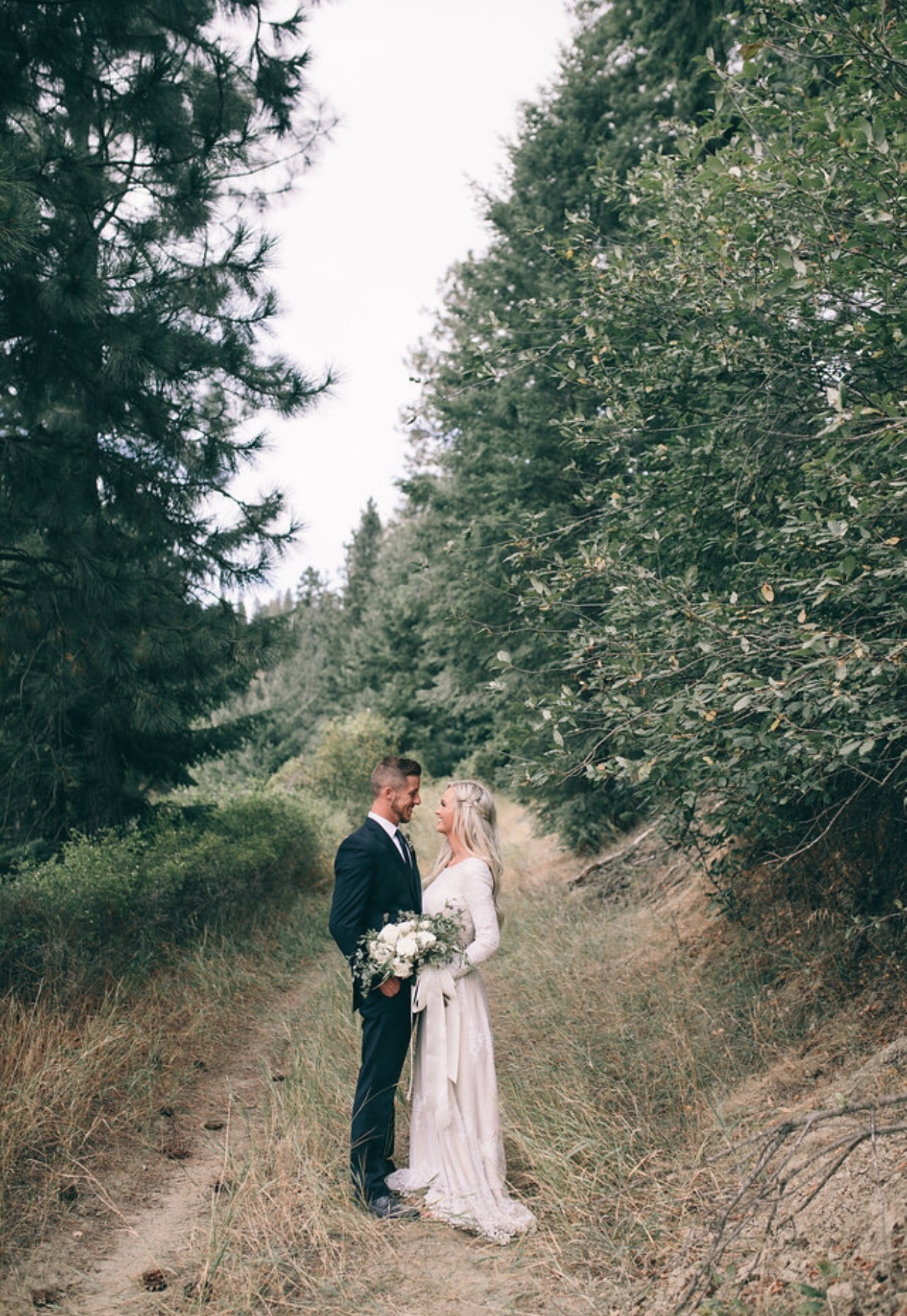 It all began when Lizzy was just 15 years old. She attended a church dance that included churchgoers from all over Idaho…there were, to say the least, lots of people there. She remembers seeing Dan and his brother and asking someone, “Who are those boys? They’re sooo cute!” And they responded, “ Those are the Edwards Boys.” Lizzy went home that night and told her Dad, “One day I’m gonna marry an Edwards Boy.” She actually continued saying that to people for many years, even though the boys had no idea she existed. You can imagine her surprise when, a year ago, she got a friend request from one Dan Edwards on Facebook. A mutual friend had told him that he should ask her on a date. The message he sent with the request said that he’d just like to get to know her better. Oh, you heard that right by the way…that was only a year ago. They had their first date on August 27th 2015 and they got married on August 27th 2016, beautiful! 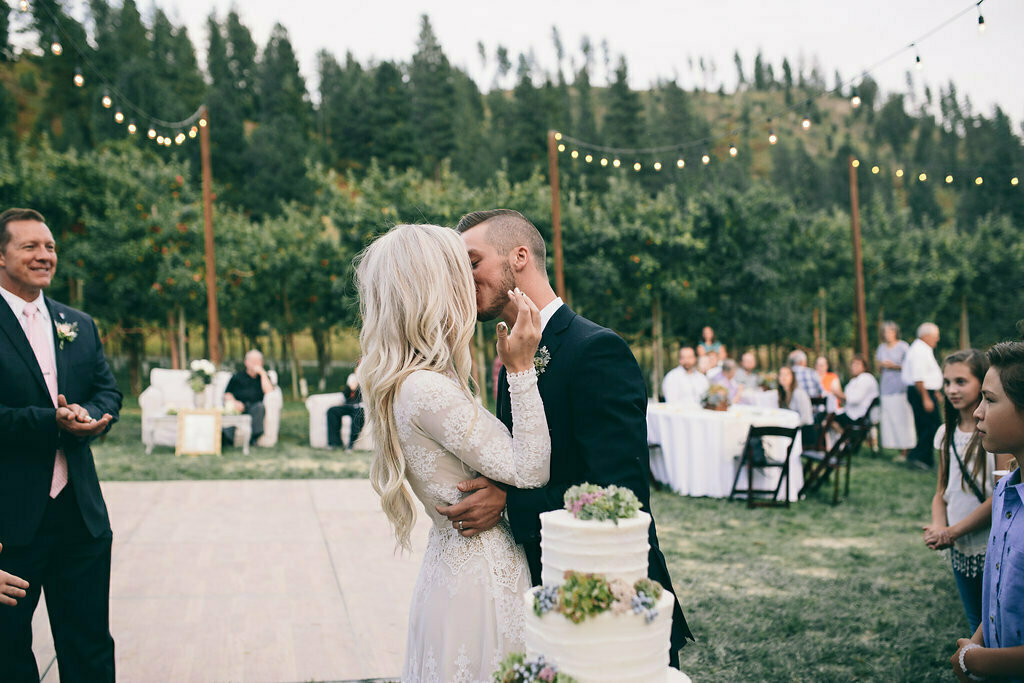 On that first date they’d gone zip lining in Coeur d’Alene, so when it came time to propose…Dan decided to take Lizzy back there. Only, this time he took her to a tree house that had been built along the course. He’d had it strung with lights, candles burning, music playing, 100 roses and an exquisite view of the sunset…just like a movie. After he’d asked for her hand, both their families materialized out of the trees to give congratulations. Lizzy loved having her family there to share in the moment with them.

She wanted something timeless, she wanted to look back at it, years from now and still be in love with the style that she chose

Finding a wedding dress was exactly what Lizzy had always dreamed it would be. She knows she couldn’t have found a more perfect dress for her special day. She had always loved lace and she’d envisioned a simple but elegant long sleeve gown…that is exactly what she got and wow! She looked magnificent. She wanted something timeless, she wanted to look back at it, years from now and still be in love with the style that she chose…luckily, that’s what boho is all about. Lizzy considers herself blessed to have found Dreamers and Lovers and she says that her dress made her feel so beautiful on her wedding day (even though we know, she’s beautiful anyway).

The couple planned a medium sized wedding, with 150 guests attending. One of Lizzy’s favorite details was the wedding venue and watching the video, it’s easy to see why. The reception took place on her Uncle’s farm in North Idaho. Lizzy grew up on a farm there and so the area holds deep sentimental value for her. The reception was held in an avenue between the apple and peach trees of her Uncle’s orchard, which overlooks the wheat fields,…a mind bogglingly beautiful expanse, bordered by a breathtakingly atmospheric mountain vista. 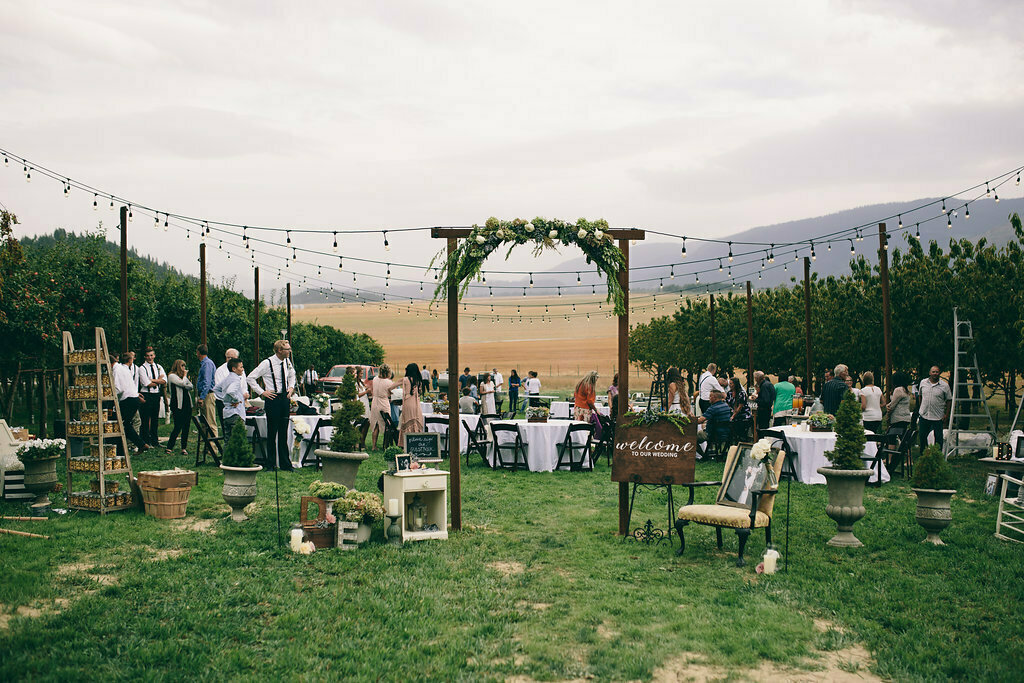 Another one of Lizzy’s favorite details was the fact that that, instead of hiring a bunch of vendors, most of the work was done by family or friends. Lizzy’s neighbor did the flowers, her brother made the cake, her mom made all the food; her dad built the most gorgeous farm table for the desserts. The family was involved in every step of the process and they wouldn’t have wanted it any other way. It was a blessing having them involved in her big day! 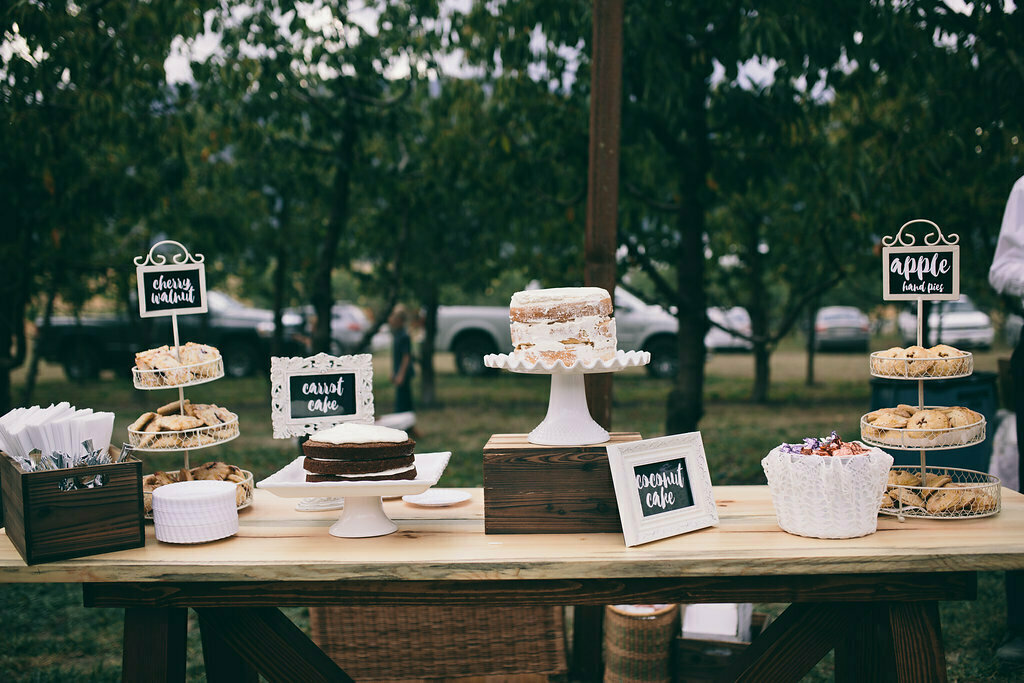 One of the biggest challenges for Lizzy during the planning process was making herself happy, instead of everyone else. With everyone wanting to share their opinion, she began to get worried about pleasing everyone and not hurting anyone’s feelings. That’s when she decided tat it was okay to say no to people and do what she really wanted instead. Once that decision was made, the process became a lot easier. After all, it’s the Bride’s day (and the Groom’s, of course ;)…), not everyone else’s!

Flower-wise, Lizzy wanted to see a lot of green in the arrangements, with white and pink roses and a very neutral palette. The result was incredible elegant, especially with the bridal party all dressed in white. Lizzy wanted flowers wherever possible throughout the reception area, on the tables, covering the archways and on all the cakes, etc. The couple visited a local flower farm and bought everything they needed in bulk. Lizzy’s neighbor, who worked at a florist shop for 10 years, put all the bouquets, centerpieces and everything else together. 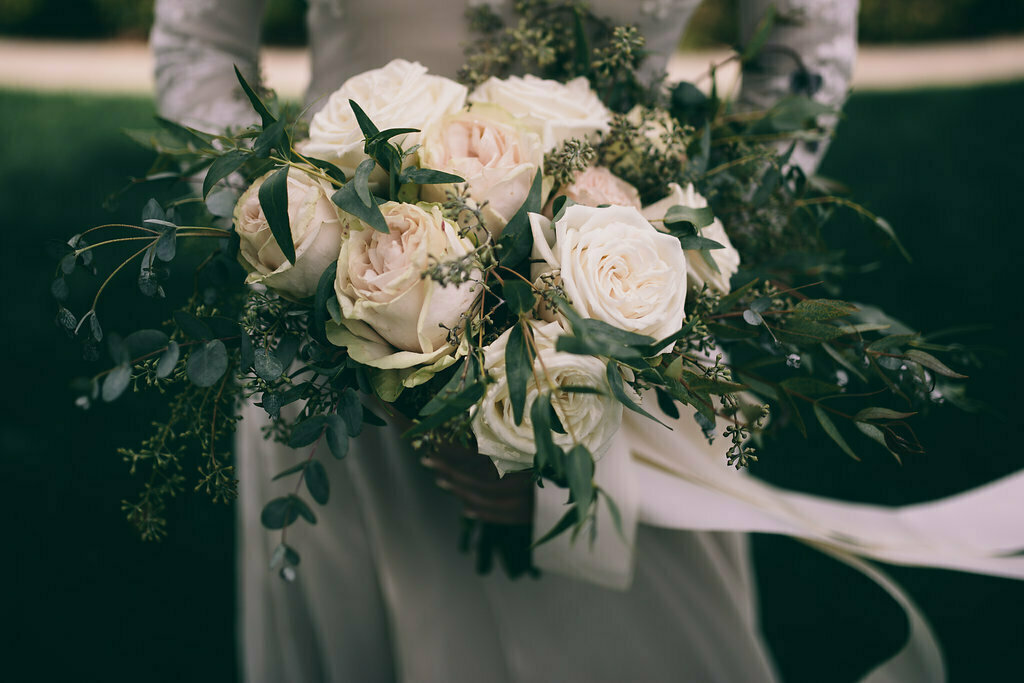 For the all-important element of food, another one of Lizzy’s favorite parts, they wanted to keep with the farm theme. The menu included barbecue chicken, corn on the cob, and homemade bread with jam and little homemade pies. Wedding favors were caramel corn in mason jars…yum!

As mentioned, Lizzy’s brother actually made the wedding cake and although she was a little nervous about not having it professionally done, it turned out better than she could ever have imagined. It was a simple, three-layered cake with white frosting and flower decorations. There was a separate dessert table with carrot cake, a coconut cream cake and various hand pies, courtesy of Lizzy’s Mom.

Lizzy’s advice for future Brides is this: Don’t procrastinate!

Lizzy’s advice for future Brides is this: Don’t procrastinate! In the end she had so much stress and all because she’d left certain details to the last minute. Having everything prepared and done early will save you a great deal of stress. 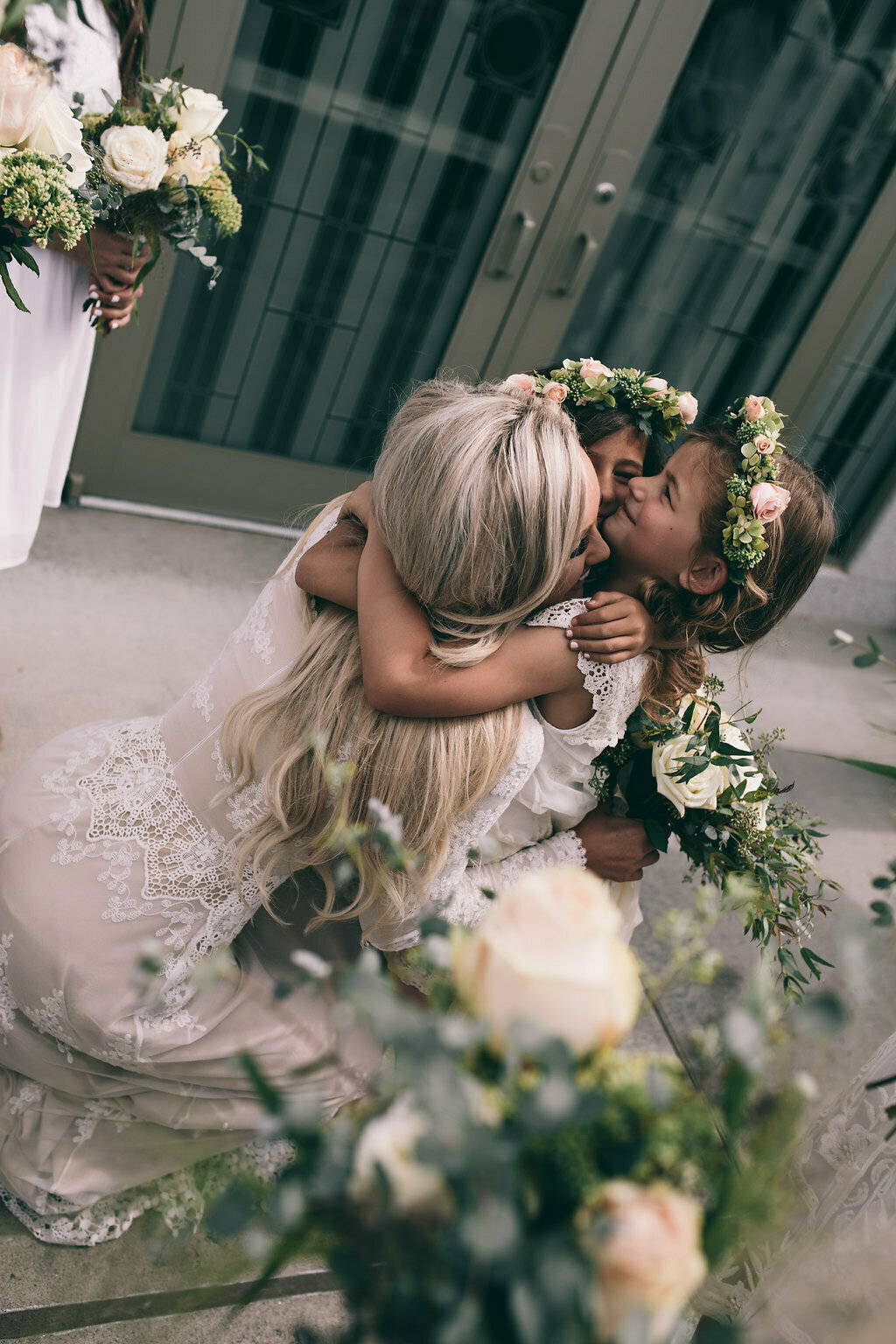 As for Dan and Lizzy…she is finishing up her Biology degree while Dan focuses on the family business. They recently bought a little fixer-upper house and they’re enjoying putting their stamp of love on it. It’s a fun project for a newly married couple; he does all the handiwork while she picks out paint and furniture.

Looking at this stunning pair, the love and close family bonds which are so evident in their wedding video…I just know that things will work out fine, sooner or later I think that the family might even expand a little. We wish them all the best and thank them for the part they allowed us to play in their special day. 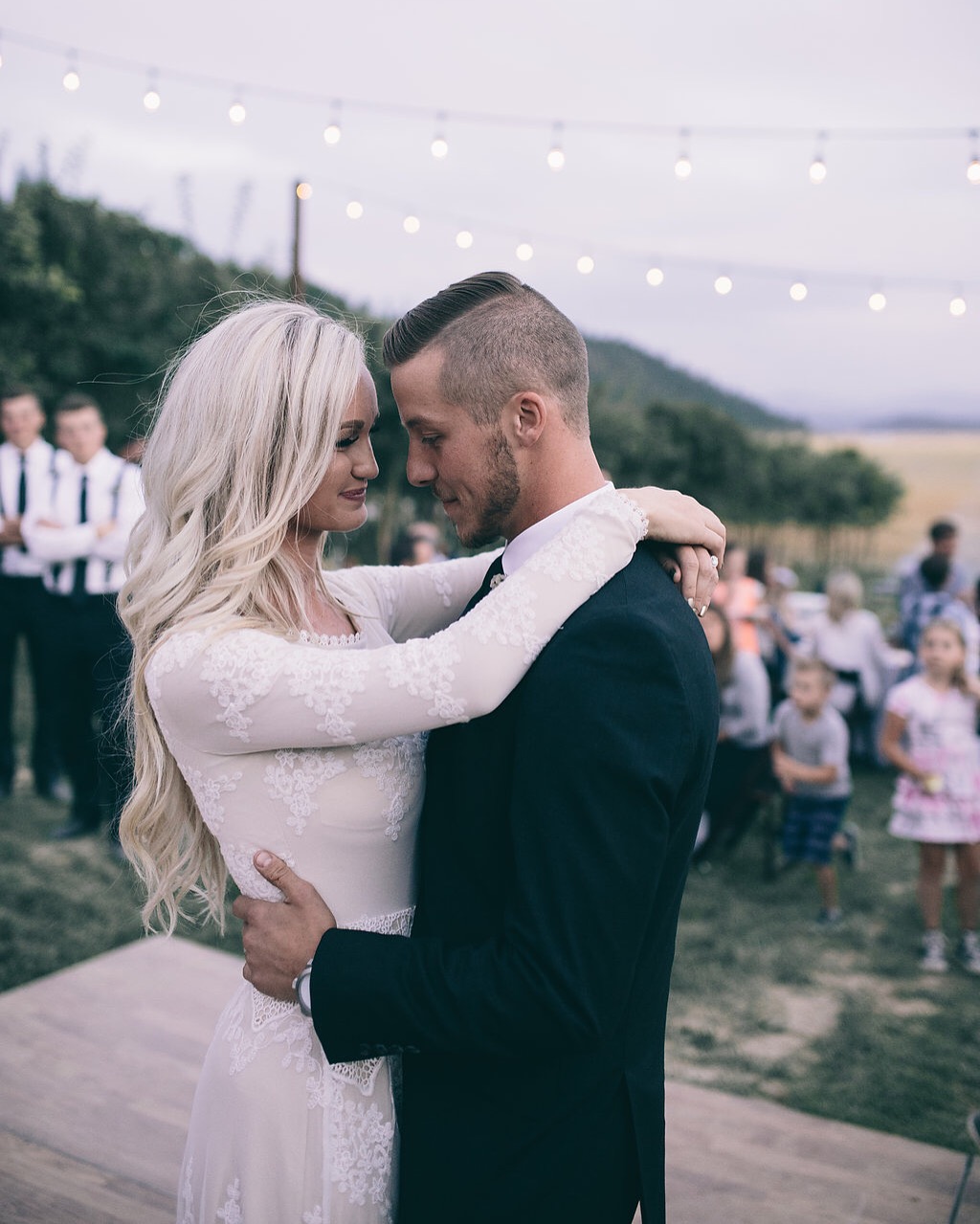 Dress: Lizzy wears a modified version of the Lisa Dress

See the Lisa on bride Julie  here and on Chloe here

We recently featured it in a gorgeous editorial with the most gorgeous florals. See Lisa in its magical form