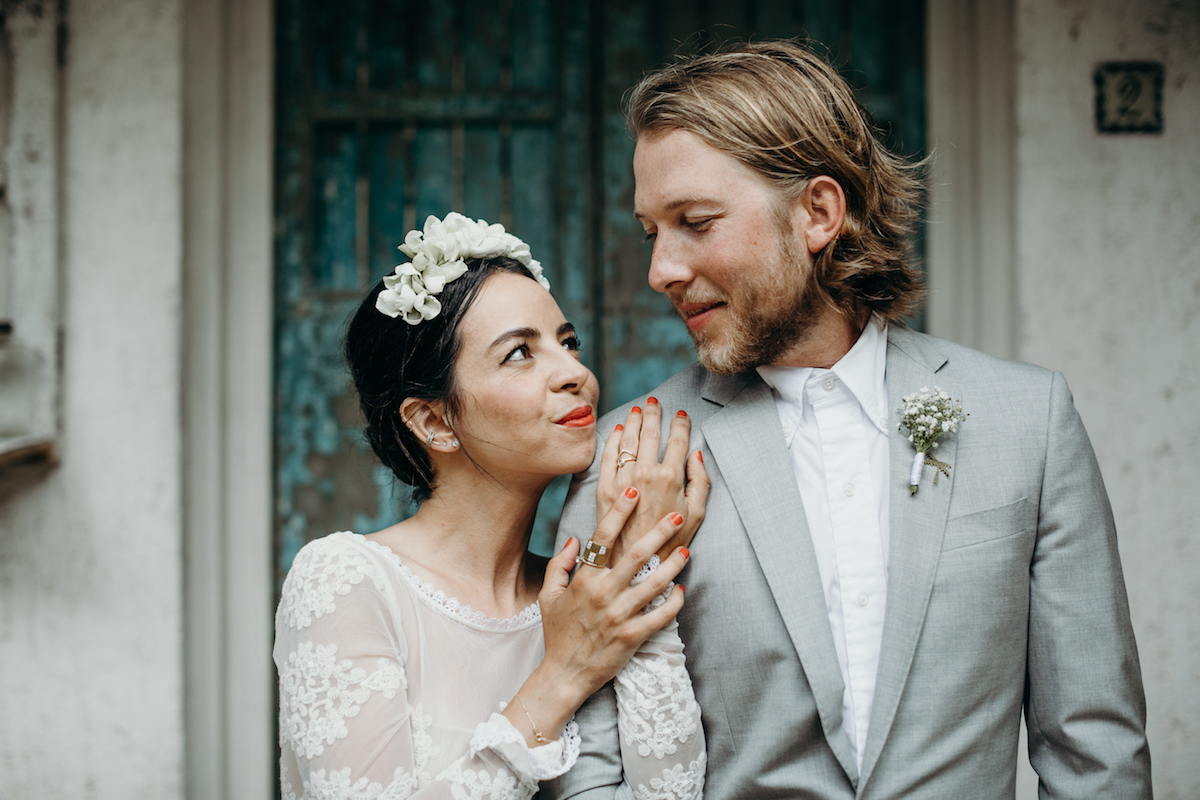 Carolina and Nate’s love story and wedding is one for the books. Interestingly enough, first dates were done on Facetime before taking things 3D. As for the wedding, location really was everything for the couple. They chose to hold an intimate bohemian wedding in Tulum, Mexico.

Carolina and Nate met outside their local hangout in Venice, CA. Interestingly enough, they shared a few dates on Facetime before taking things 3D. Carolina was out of town a lot with her job but they kept in touch via phone and web. Then on her return to Venice, she picked him up (in her car, silly) and they went to one of Venice’s most popular Mexican food spots, Oscar’s Cerveteca to enjoy a dinner on their first actual date.

In the Fall of 2016, Carolina had a work trip scheduled to Paris, which wasn’t uncommon for her. Since Nate had never seen Paris, he announced that he was coming along for the ride…only; he had other, more sly plans. Carolina was completely bogged down with work, meetings and events every night, after full and busy days. The poor guy struggled day after day to find an opening to pop the Q and finally, the moment came.

One night, after dinner, Nate asked Carolina to walk back to the hotel with him (he’d been carrying a ring in his pocket for days BTW) and although she was cold, tired and annoyed she decided to oblige, knowing that it would be an experience for him, since he’d never been to Paris before. At one point they strolled on to a stunning Parisian bridge, to find that they were the only ones there, which, while being ever so slightly creepy, also afforded Nate just the opportunity he needed.

Pulling a lock from his pocket, Nate said he’d brought it from LA for them to lock onto the bridge (as is tradition for lovers visiting Paris). Still cold and annoyed, Carolina just wanted to get it over with and move on. He handed her the lock and asked “Aren’t you going to read what it says?” He’d written the words “Will you marry me?” on the lock…the answer, of course, was yes. After putting the very special lock on the bridge together, they walked back to the hotel to call their families with the good tidings.

The Search for the Bohemian Lace Wedding Dress

Now, although Carolina’s a bit of a minimalist tomboy when it comes to her dress sense, she had a clear image in her mind of a dress that was romantic, long sleeved and made of lace. She visited a string of boutiques in LA but she just didn’t seem to connect with anything. Luckily, after her engagement, she’d picked up the habit of following Instagram Wedding accounts and that’s where she had the pleasure of discovering D&L’s laid back wedding dresses.

She was immediately drawn to the lovely, boho Lisa dress and could hardly wait to come in and try it on for herself. Lucky for her, she’s an LA local so in short turn she visited the Dreamers and Lovers Studio and found that the dress lived up to all her dreams and more. No dress could have been better suited for the exotic destination wedding that Carolina had planned.

For this couple, location really was everything. They chose to hold an intimate wedding at Posada Margherita in Tulum, Mexico. The 8 room hotel is the pair’s all time favorite place on earth and they make a habit of vacationing there every year and when they do, the meals are always the highlight of the show. Strangely enough, it’s not a Mexican restaurant they frequent there but the hotel’s Italian Restaurant, which is part of the reason they keep going back.

Even before getting engaged, they’d sat at one of those tables eating home made pasta and dreaming about how wonderful it would be to get married there one day. Well, their dream came true. They invited 55 of their nearest and dearest to celebrate their love with a stay at their favorite spot on earth. Of course, Carolina had a chance to spend time with each of them during their stay, which was absolutely magical.

Carolina didn’t compromise any of her values and wishes during planning and she advises other brides to do the same with make up, style, decor, everything. After all, it’s about you and your man and should reflect who YOU are.

Being a destination wedding, Carolina didn’t get to check on and actually see things herself before the time, she just had to trust that the wedding, which she planned all by herself, would turn out as she dreamed. At least she knew she had the most special location booked and that the food would be awesome as usual. The element of surprise was invigorating but also stressful at times. When the time came to enjoy the results of her planning, she was proud, overjoyed and certainly relieved.

Carolina’s favorite detail of the wedding was the fact that her groom and his friends built a Jewish Huppah from scratch, with driftwood and leaves they’d found in Mexico. She was admittedly a little nervous when the guys said they wanted to build it themselves because although she isn’t Jewish, the huppah symbolism was very important to her. It turned out beautifully and she was so grateful that not only did no one use it before them. The hands of the people that truly love them built it. Plus her best friend, Cami, sewed the loveliest tropical flowers to the DIY huppah her husband had helped build, on the day of the wedding.

The flowers were all Baby’s Breath, which is Carolina’s favorite and she couldn’t have imagined anything that would have suited the venue better… which has a very old European feel to it. She even brought her own blue mason jars all the way from LA to Mexico, which was rather a big effort, to say the least. Still, it was worth it and in combination with the Baby’s Breath, a sight for sore eyes.

The couple didn’t opt for any readings other than their own, self-written vows, which turned out so similar that it brought a tear to most eyes present. They were married by one of their closest friends, Noah, and it was extra special having someone so close to them share the story of their love with everyone there. Carolina’s favorite part of the vows was “I vow to always speak the truth and seek kindness in each word, moment and day we spend together, with this ring, I am forever yours.”

They ordered a two-layer coconut vanilla cake online, having absolutely no idea what it would taste like but they were pleasantly surprised! They also enjoyed some Tiramisu after the rest of their Italian feast. Jewish, Mexican, Italian…talk about eclectic! That’s what boho is all about.

The guests partied the night away beach style, barefoot in the sand and under a sea of stars, to the beats of Carolina’s brother, who was DJ for the night. It turned into the most mystical night of their lives, there was never a moment when they couldn’t stop and feel the gentle sea breeze on their skin or hear the ocean lapping against the Mexican shore.

With a wedding like that, perhaps an immediate honeymoon didn’t really seem necessary. The couple plans to take a honeymoon sometime in the near future and when they return, they might even look into starting a family to continue the tradition of love!!!