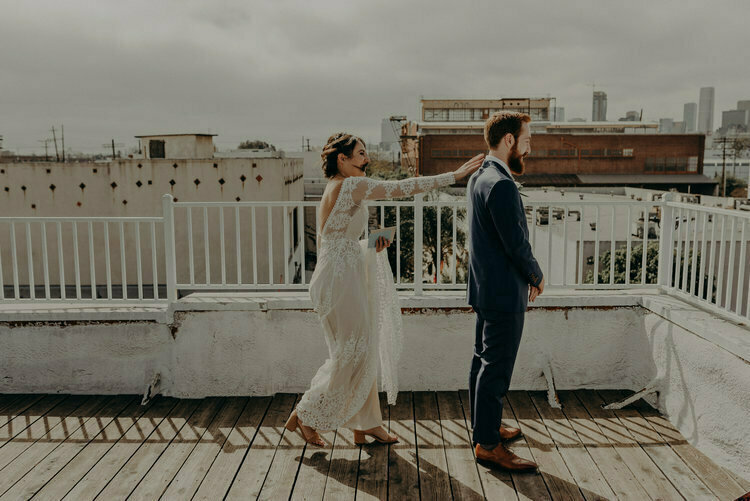 The Sparks didn’t fly the first time at the coffee shop, but it did on the second encounter. Share in their dreamy warehouse wedding in downtown Los Angeles, and his on-point navy blue suit, and her backless lace simple wedding gown. 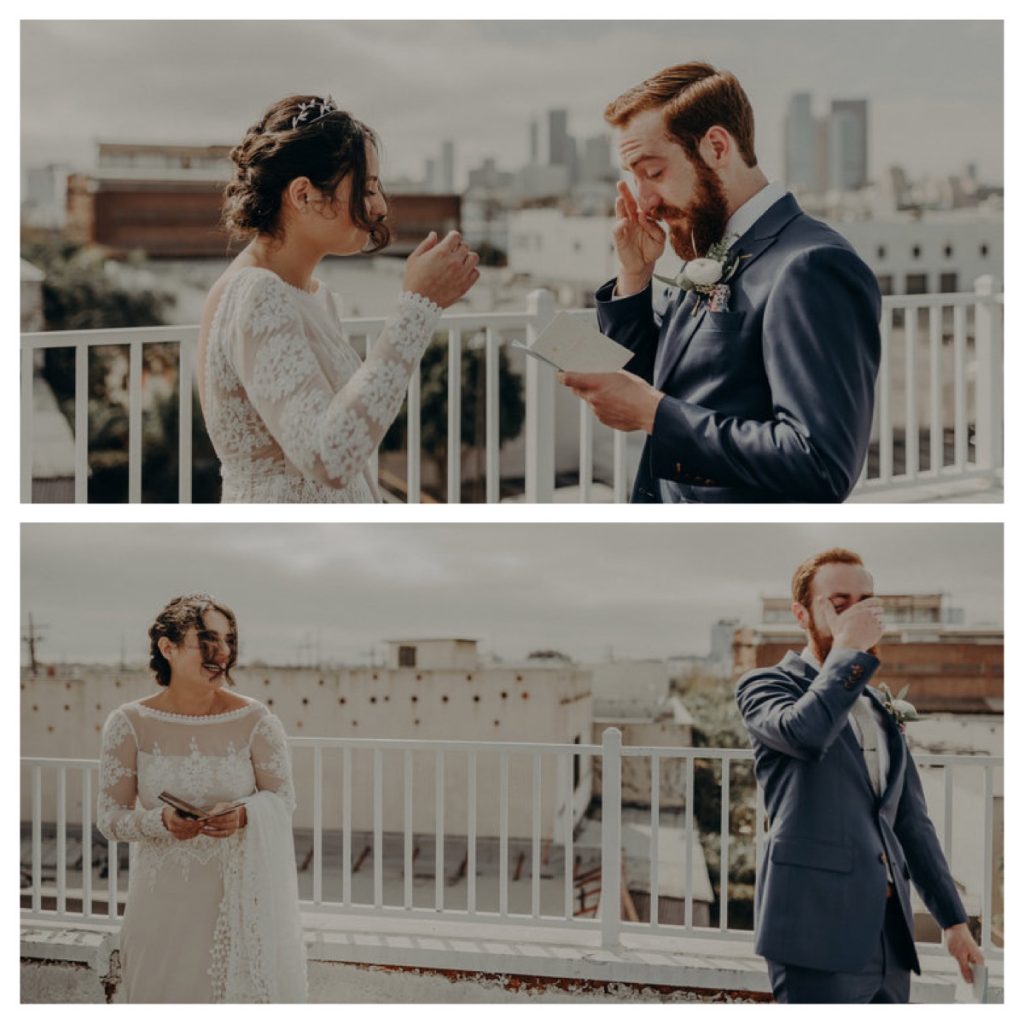 Lisa and Kyle had met before, while working at the Campus Coffee Shop at Loyola Marymount University…but that didn’t really result in any sparks. The second time they met, at a party during the weekend before junior year, something in the stars made itself known. After that chance encounter came many more, so called ‘accidental’ encounters, which seemed to be happening a little too regularly to be mere coincidence.

It then so happened that the pair, along with a large group of friends, planned to go on a hiking trip. Oddly enough, every single person in the group called to cancel…only Lisa and Kyle were left and destiny, it seems, was written. The couple didn’t follow suit and cancel though, rather, they took up the opportunity for a first date and… Things have never
been the same since.

The proposal happened on a day that made Lisa even more keenly aware that she’d landed on a catch who’d see her through thick and thin, who she could count on to be by her side through life’s trials and uncertainties…it was the day the of the 2017 Women’s March in Downtown LA. The couple had spent the morning at the march, had lunch and then went to Vista Hermosa Park, where Kyle took the plunge and proposed! Lisa obviously accepted, all that was left to do was plan the big day…and live their love for good! 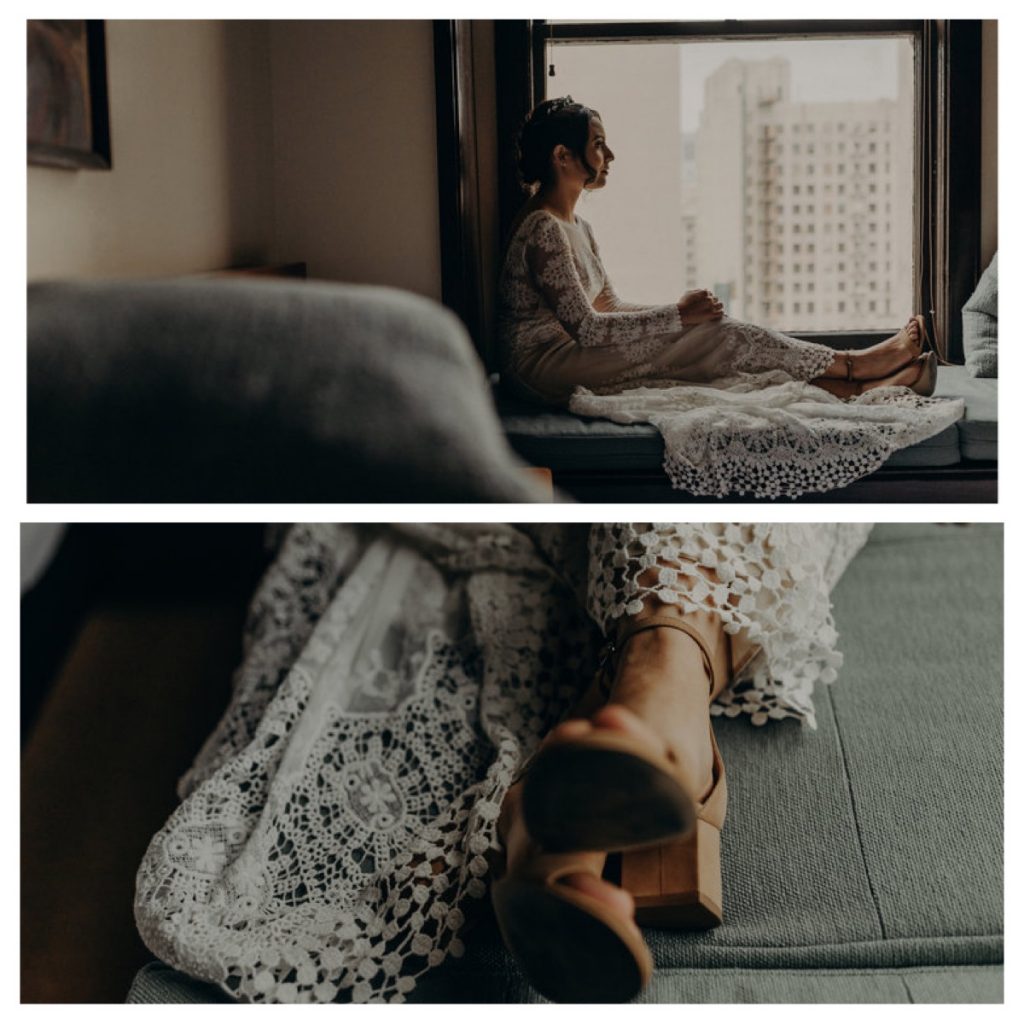 When it came to finding the perfect, totally boho wedding dress, Lisa couldn’t help but be entranced the moment she came across Dreamer & Lover’s lovely and very aptly named, Lisa simple wedding gown on Instagram. Right away she scheduled a visit to the Dreamers and Lovers Studio with her mom, to try on a selection of three low-key simple wedding gowns, one of which was obviously her namesake.

With more than a subtle instinct about the rightness of the Lisa dress, Lisa arranged that she try that one on last, good move, since it was Lisa that had her in tears the minute she stepped into it. The deal was officially sealed and Lisa had found the ONE…it was Lisa, lol!

95 Nearest and dearest were invited to an intimate wedding that, for the couple, needed to incorporate things that made sense in the context of their relationship. This was an intention that saw the plans deviating rather heavily from tradition at times and explaining the WHY to their largely traditional families was something of a challenge for the couple. Luckily, at the end of it all, their respective families saw the beauty in it all, only to come to appreciate it, as they did, for the intention behind it.

The couple decided to write their own vows, more than that…they wrote two sets! One set was more personal and got read during first look and the other set was read in front of friends and family at the ceremony. Their favorite phrase was, “ to fill our life with adventure and our home with laughter/ to encourage you to grow as an individual and inspire you to do so/ to love you completely.” 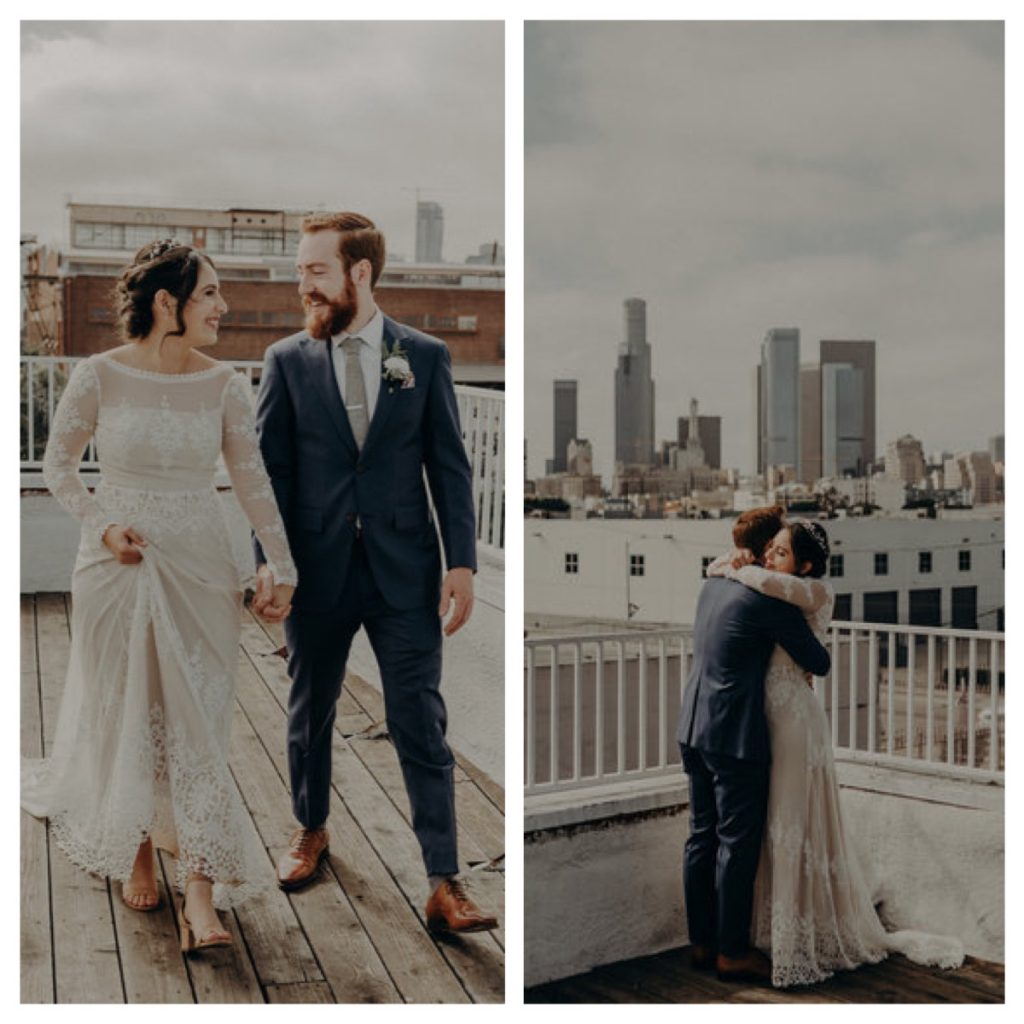 Other than that, one of the couple’s favorite poems, Kyle’s sister read ‘I carry your heart with me,’ by EE Cummings. The poem found a place in their combined heart when they had had to endure a long distance summer love one year. And…To honor the families and heritage of both lovers, the couple took turns reciting lines in English and Spanish, during their vows.

Lisa had a lot of fun with her chosen vendors, she felt inspired by their creativity and felt that getting to know the unique individuals who poured so much of their heart and soul into making her day perfect was one of the most rewarding parts f the day, for sure!

Flowers were done and mastered by Sophie Ballmer of Sybil Sophia, who grasped and perfectly executed Lisa’s desire for tons of greenery with subtle shows of white. Even more astounding and perfect was the way Sophie incorporated white orchids into the bouquet mix, since Lisa is of Guatemalan heritage and the La Monja Blanca white orchid is actually Guatemala’s national flower.

One of the best things for the couple was that people really noticed the effort they had put into making their boho Los Angeles wedding original and uniquely their own. One such effort was the adorable, customized papel picado flags they ordered, which had their names on! The colorful flags came out so great that many of the guests took them home as souvenirs, awesome! 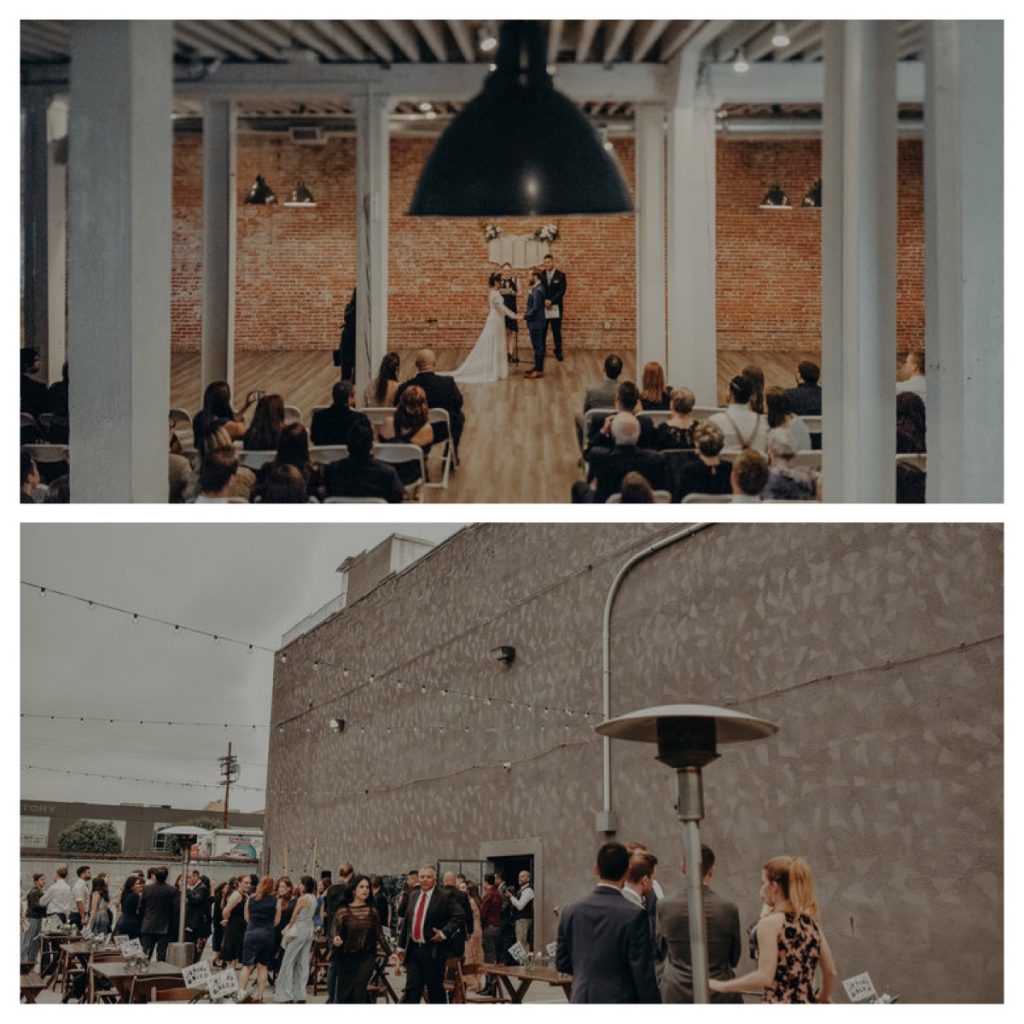 For dessert, the pair opted for mini doughnuts and conchas, which are a delicious Mexican specialty that is like a sweet, enriched bread roll with cookie dough like topping and a shell pattern on top, yumbles!

Lisa highly recommends that laid-back-bride-to-be’s opt for a month-of coordinator, as so many possible stress factors arose during the days leading up to their boho dream day, such as rain, for example, that she doesn’t think she would have survived in one piece without the welcome assistance of an industry pro.

Lisa told us that she now understands why they say your wedding day is one of the happiest days of your life! The couple were absolutely thrilled with the way everything turned out on the day, to have so many people from so many different stages and aspects of their lives come together and celebrate on a day that was completely their own was just priceless.

Also major love for their warehouse wedding venue at the Unique Space in downtown Los Angeles. We think it’s the perfect spot to host an intimate small wedding for boho brides. The interior spaces all goes great with the bride’s simple wedding gown. 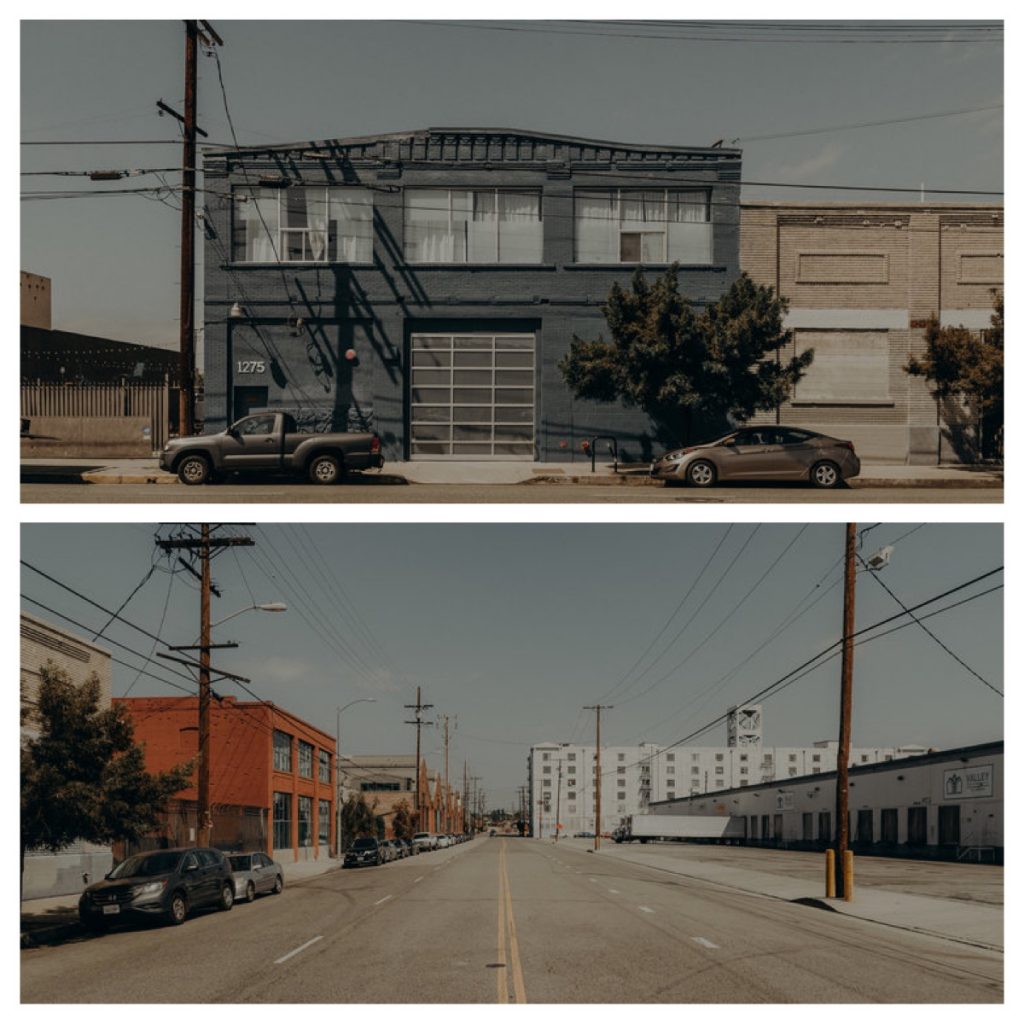 As for the future, well…in between the endless joys of building and savoring a life together, this pair still have their honeymoon coming up, as it was postponed. Now they’re just eagerly counting down the days before they get to leave on a romantic tour of beautiful Panama! All the very best, you guys!! MWAH!

Photographer : This duo happens to be one of our favorites, based in LA and has now shot so many of our brides’ wedding. Isaiah Taylor Photography.