Vibeke + Simon Boho Wedding in Norway | Dreamers and Lovers
Don't Live in California and Want to Try our Dresses?
Make an Appointment   | 0 Items 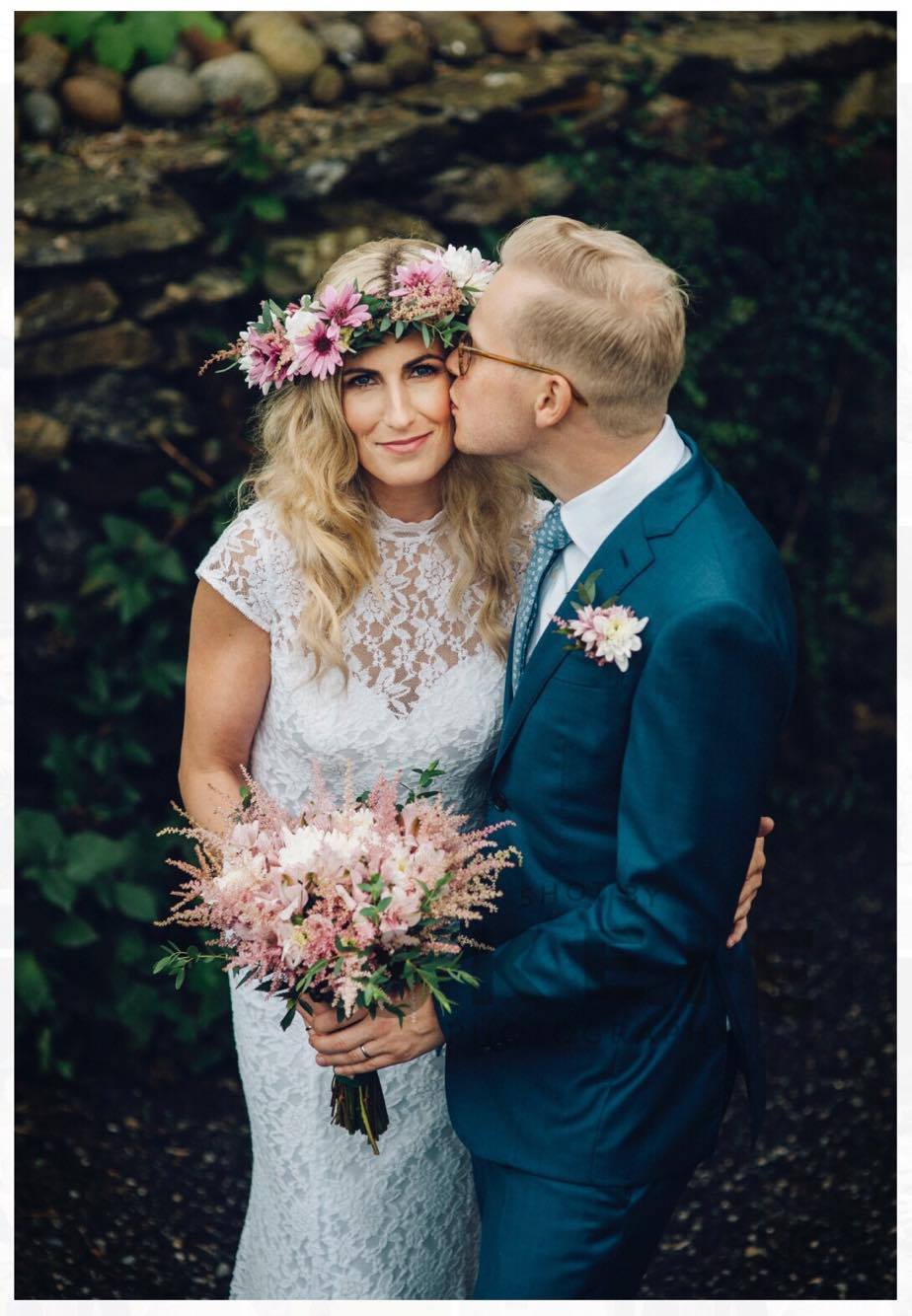 A self-confessed hippie with what she claims are far too many hair extensions, she met her soul-mate, a hipster Swedish guy with piercing blue eyes 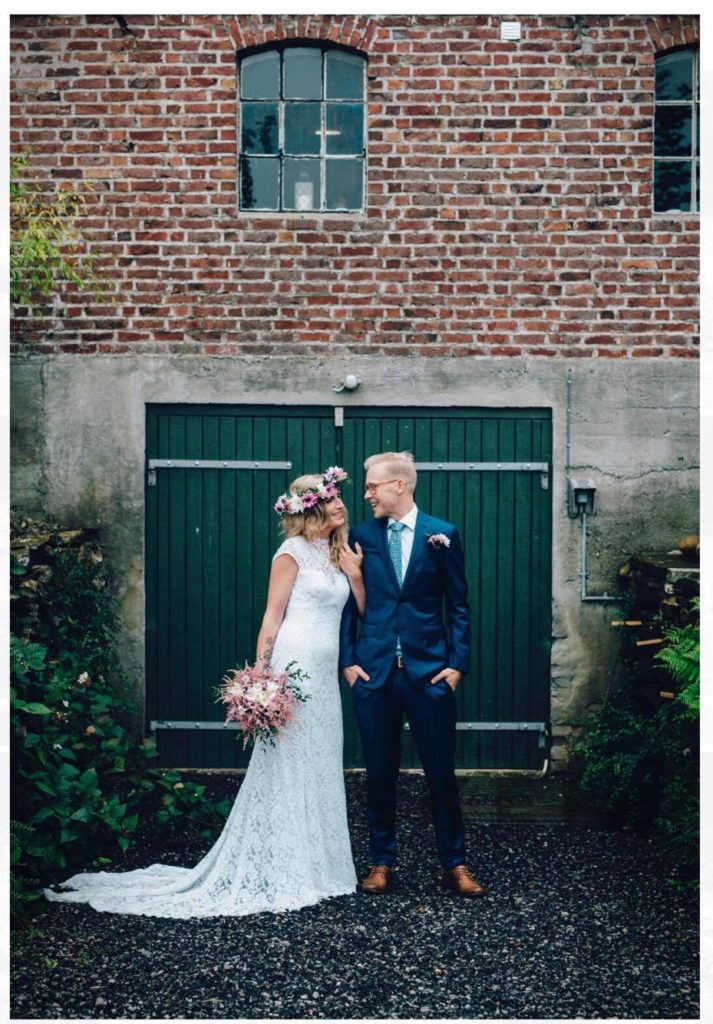 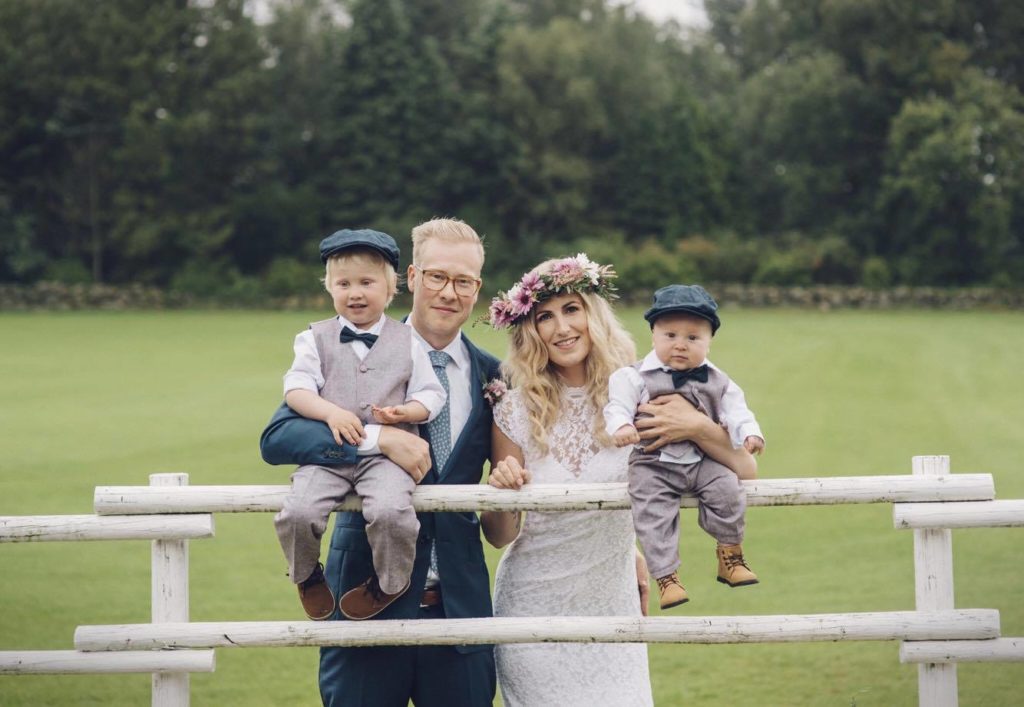 Here’s a Real Bride Story to prove that D&L’s been helping boho wedding dreams come true in just about every far-flung corner of the globe.

Vibeke is what you’d call a striking Norwegian beauty, a self-confessed hippie with what she claims are far too many hair extensions (although, to us, those just look like lustrous blonde locks). She met Simon, a hipster Swedish guy, with skinny jeans and piercing Swedish blue eyes, whilst studying economics in Norway in 2008. He was studying fire engineering at the same University when fate decided to introduce them to each other one night at the student pub. They danced a little, flirted a lot and within no time, they were very much an item. They were head over heels in love and Vibeke says she can still feel the butterflies whenever she recalls those heady times.

Life isn’t always peaches and cream though and after their studies came some trying times as the loving couple were forced to live in separate countries. Yet life would have a hard time keeping this pair apart and they finally moved in together in Sweden and soon had a beautiful son named Alfred. The decision was made to move to Vibeke’s homeland of Norway so they bought a quaint little cottage and that’s where they brought their second, adorable son (Teodor) into the world…but not before the night of the long-awaited proposal.

Then he went down on one knee and proposed. Vibeke, who’d been hinting (or nagging, as she puts it) Simon for some time, spent all of 15 minutes saying things like: “you know you don’t have to do this if you don’t want to…”

It all went down the night they moved into their new place, their first purchase together. Both of them were staying over at Vibeke’s parents’ house, exhausted from moving all day amongst a sea of boxes and bags. Sticky, smelly and dusty from the day’s work, they sat down on the couch at last. Simon was leaning forward, looking agitated, so Vibeke told him: “come on, relax…we’ve got no more to do tonight.” Simon replied: “well, there is one thing I have to do, now we have a new house and everything.” Then he went down on one knee and proposed. Vibeke, who’d been hinting (or nagging, as she puts it) Simon for some time, spent all of 15 minutes saying things like: “you know you don’t have to do this if you don’t want to…” etc. but she finally came to her senses and gave him a “yes, of course!” Phew!

So, since Vibeke was heavily pregnant during her dress hunt, there was always the question of whether or not she was going to be back in shape by the time the special day came along. It turns out the stars were smiling on her in more ways than one! Being a hippie girl through and through, she sat back and simply googled ‘lace wedding dresses’…which is how she came across the Dreamers and Lovers website. She ordered the perfect dress for the laid back, totally DIY wedding that they had in mind. That was a month before the birth of their second beautiful son but if you’ve seen the wedding pics you know, she looked an absolute vision and no baby weight in sight.

The wedding was to be held on an old farm on the borders of Stavanger, a picturesque coastal city in Norway with a rich history dating as far back as 1125, it hardly gets more romantic than that and what’s more, the couple are proud to call Stavanger home.

85 Guests were invited and the couple had determined to do as much as possible themselves, knowing that that would make the experience a far more personal one. They wrote simple, candid vows both about the things they love about one another and the little things which annoy them, a detail which really had the guests laughing. Vibeke commented on Simon’s ability to make such a racket climbing the stairs that she’s certain he’ll one day make a hole through them.

The ceremony was overseen by one close friend whilst another friend, Lisa, sang Håkan Hellström – Valborg, a Swedish song with poignant, beautiful lyrics. Vibeke’s best friend crafted her bouquet, wild, summery and gorgeous and V wore a truly bohemian wildflower crown which couldn’t have looked more perfect with her laid-back gown. The room was decorated with a score of lights and wildflowers by the couple personally, which turned out to be truly rewarding.

Simon made desert himself (hello!), a delicious panacotta with raspberry topping and, as is tradition in Norway, friends and family brought the cakes. I rather like this tradition as it worked out that the couple had, instead of one wedding cake, 12 unique cakes with different fillings and frostings.

For Vibeke, the biggest challenge was most certainly trying to plan a wedding with two small boys in tow so her advice to boho brides to be is…try to get married before you have kids!

Oh, about Simon…V had this to say: “he’s honest, sincere, outgoing, smart, he’s not materialistic, he’s kind and good with people and he’s a wonderful father. After a long day’s work, he still has energy for me and the kids and I feel completely safe when I’m with him and he is, indeed, my rock.” Now, if you ask me, a girl can need little more and I’m pretty sure that this happy family will continue to grow in love and happiness, if not in size as well.

The couple are focused on family now, in their little cottage on the coast of Norway. They are taking good care of each other and chasing after the little ones can be exhausting, Vibeke loves them all so much that for her it’s worth it a billion and one times over. 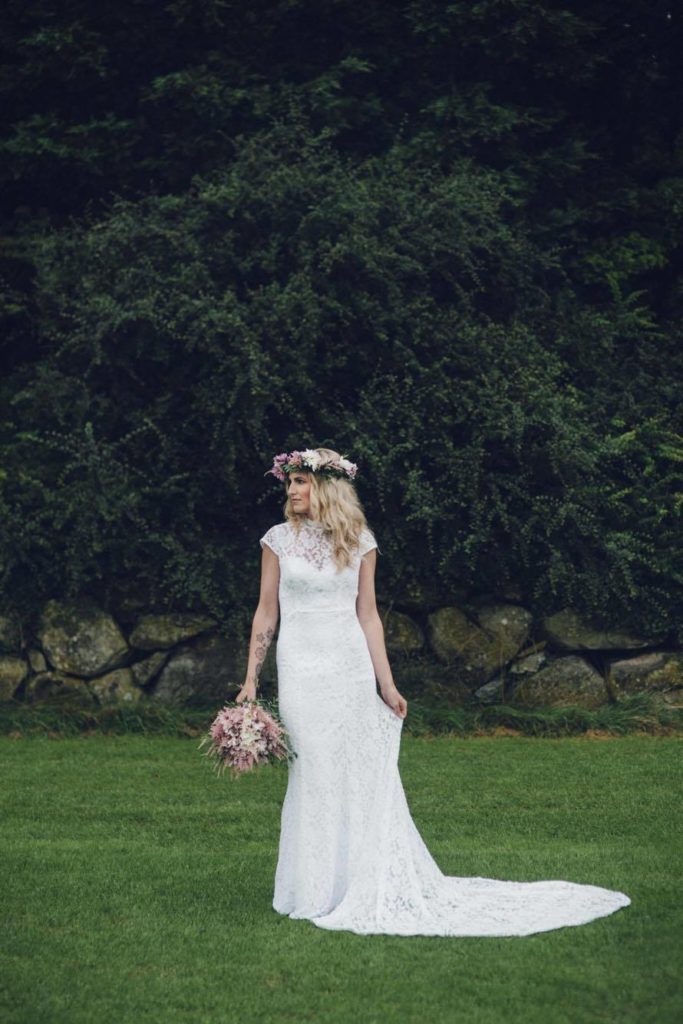 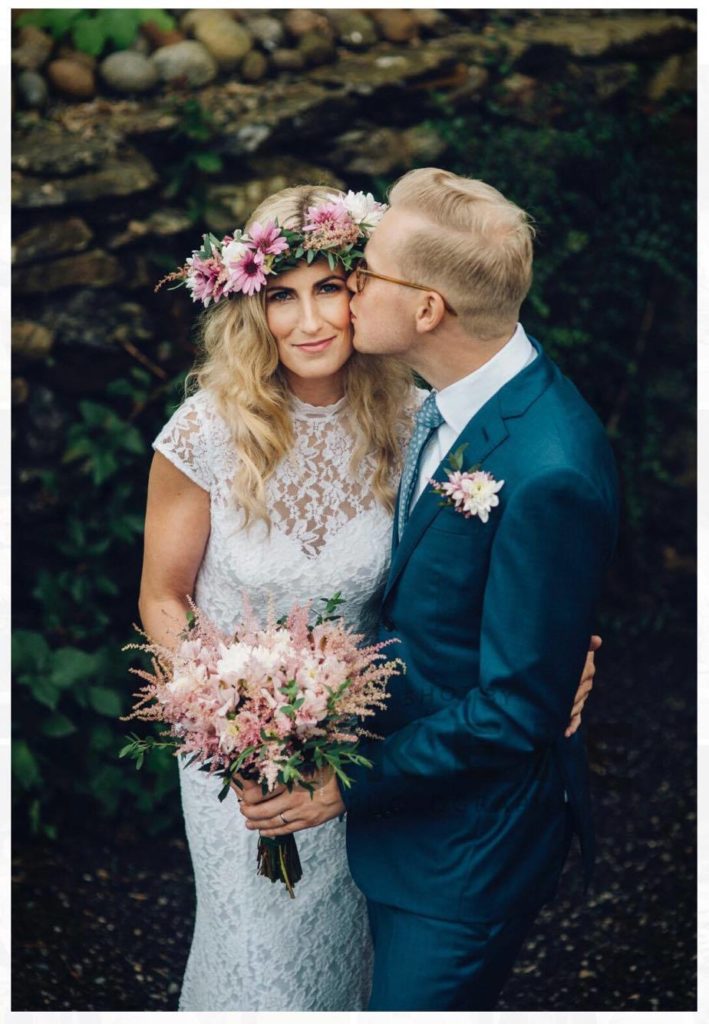 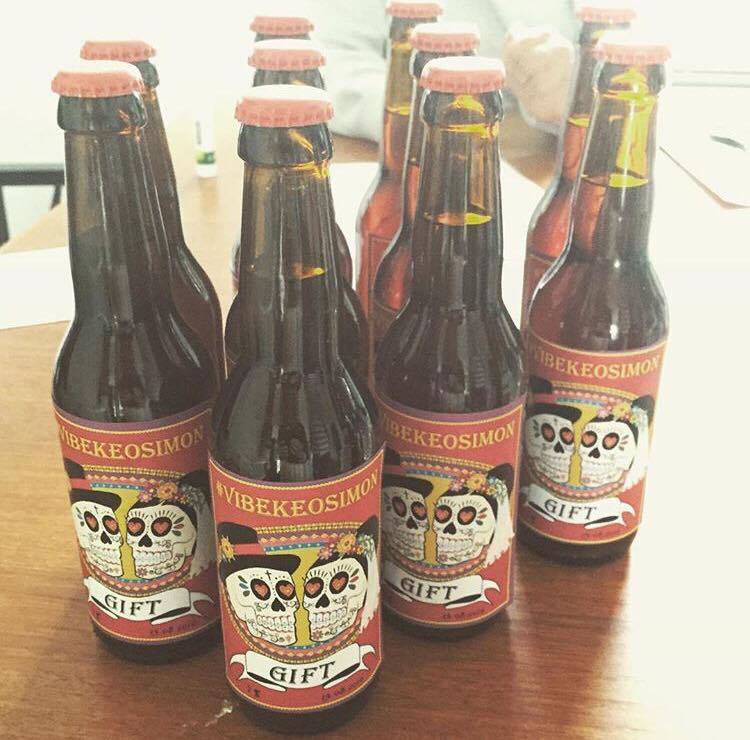 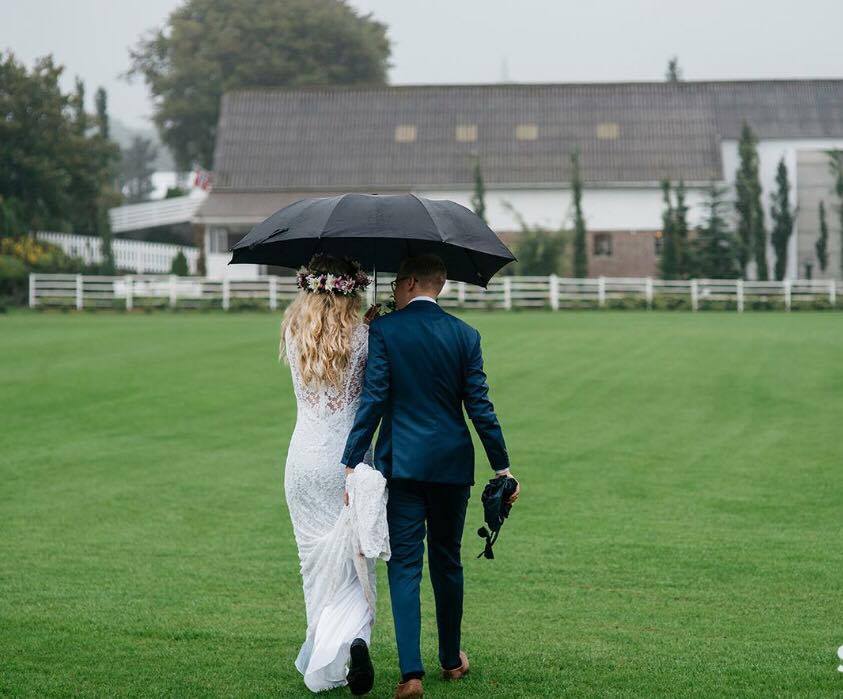