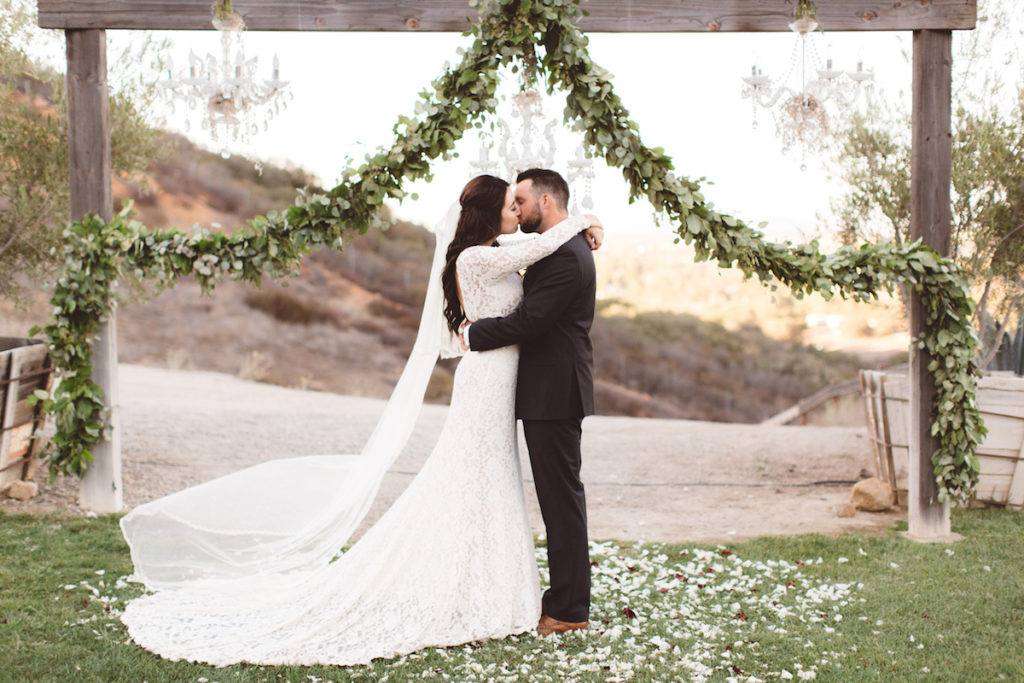 Both natives of a small Southern California town called La Crescenta, where everyone knows everyone, Lauren and Brent first met when she was in the 7th grade and him in the 9th. Lauren had been invited on a ski trip to Big Bear for the weekend with a friend and her family and Brent, who was friends with the brother, had been invited as well. Lauren had heard of Brent before but had never actually locked eyes with him; as soon as she had she knew that this would be the guy she married one day. Right from the start, whenever he tried to talk to her, she would get really nervous and feel butterflies in her stomach.

They had an awesome time on the trip but they were still so young and since Brent had a girlfriend at the time, the best Lauren could do was to develop a huge crush on him, which stood the test of time. As Laura approached her senior year, the pair ended up in the same friendship circle. Brent became really close friends with Lauren’s brother, which in turn made it a little easier for Lauren to be around him. Brent officially asked Lauren out on their first date when she graduated from high school: she was 18 and he was 20.

Lauren grew up in a family of avid campers, with a passion for riding dirt bikes and off road vehicles in the desert. For her 26th birthday they planned a trip to Cal City to go camping and do exactly what they love. One Saturday evening, while the girls were all sitting in a trailer talking where it was warm, Lauren noticed Brent walking around the camp aimlessly, in the corner of her eye. Now, this was a little weird because usually the guys would all be together around this time, working on something together or hanging out.

Lauren turned to grab a couple of beers out of the ice chest and when she turned back, she found Brent on one knee, proposing…it was perfect and 100% magical

Lauren approached him and asked what was wrong, insisting he was perfectly fine, he invited Lauren for a sunset cruise in his razor. Lauren agreed and her cousins were set to follow along shortly. Brent even said that she could drive, which was something he never did so she got really excited and they took off. Brent guided her to the top of the mountain where they could switch off engines and enjoy the sunset. Lauren turned to grab a couple of beers out of the ice chest and when she turned back, she found Brent on one knee, proposing…it was perfect and 100% magical. 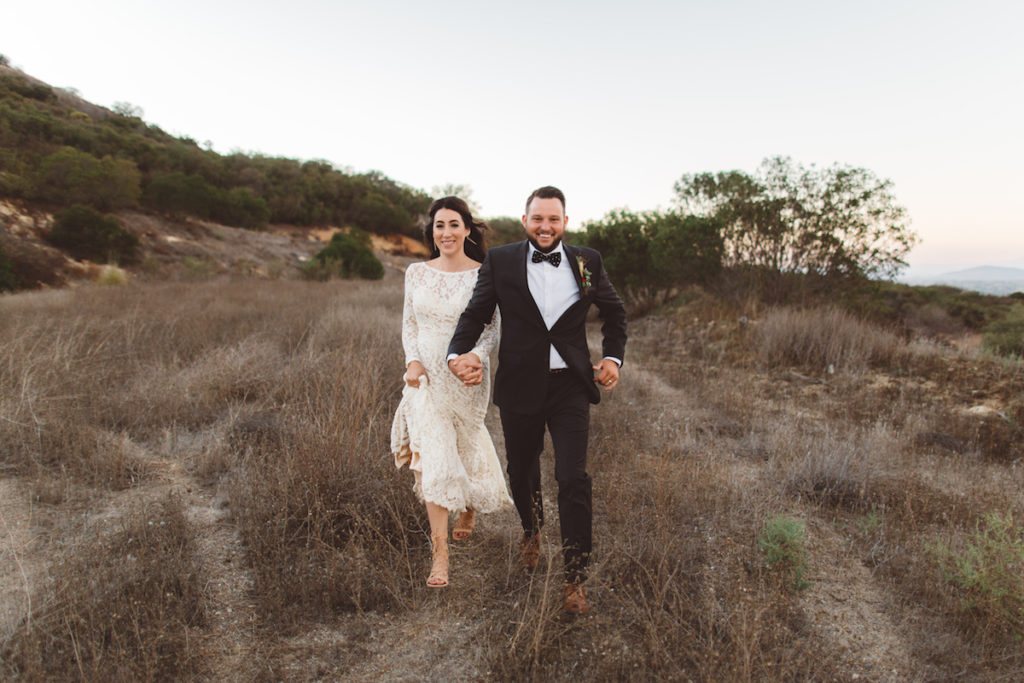 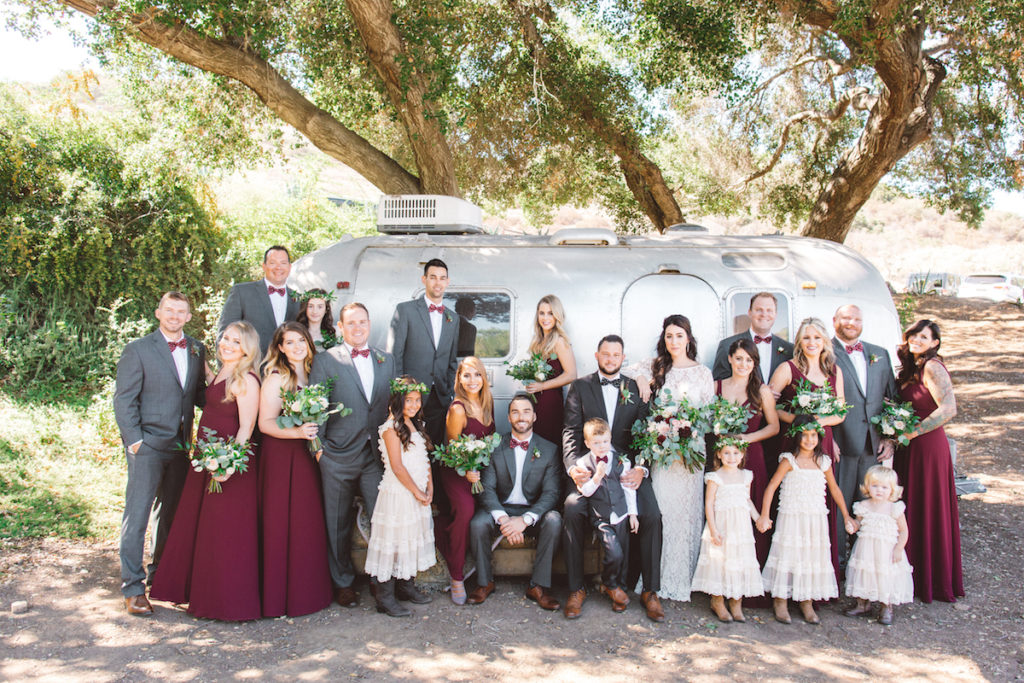 After a moment of hugging and crying together their cousins showed up out of nowhere…they’d been hiding in the nearby bushes the whole time, taking pictures. They headed back in to camp to find the entire family there cheering for them with glow sticks and champagne. Brent had planned everything out just perfect and it was the most wonderful feeling in the world.

So, Lauren didn’t exactly have an image of her ideal dress in mind…she did, however, know that it would have to be comfortable, as well as a good representation of her style. After seeing pictures from her brother’s friend’s wedding, she fell in love with the dress. She did a little digging and soon found out that the dress came from Dreamers and Lovers. Lauren made one other appointment and an appointment at Dreamers and Lovers. Although she was really discouraged by her first appointment, she knew that she’d find her dress at D & L and lo and behold, she ended up falling in love with the first dress she tried on! 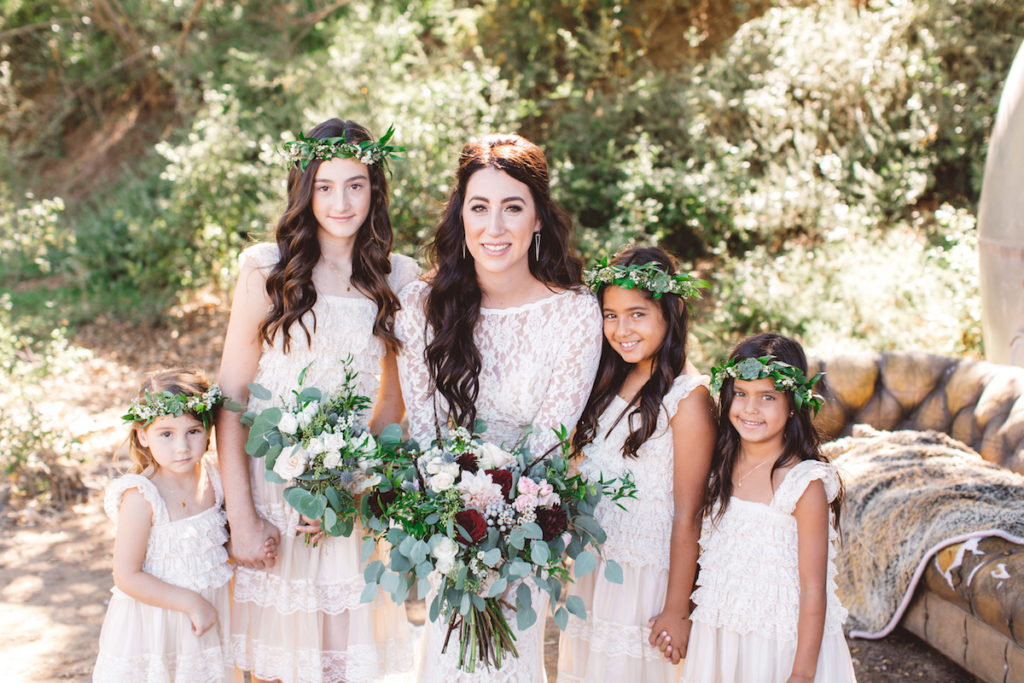 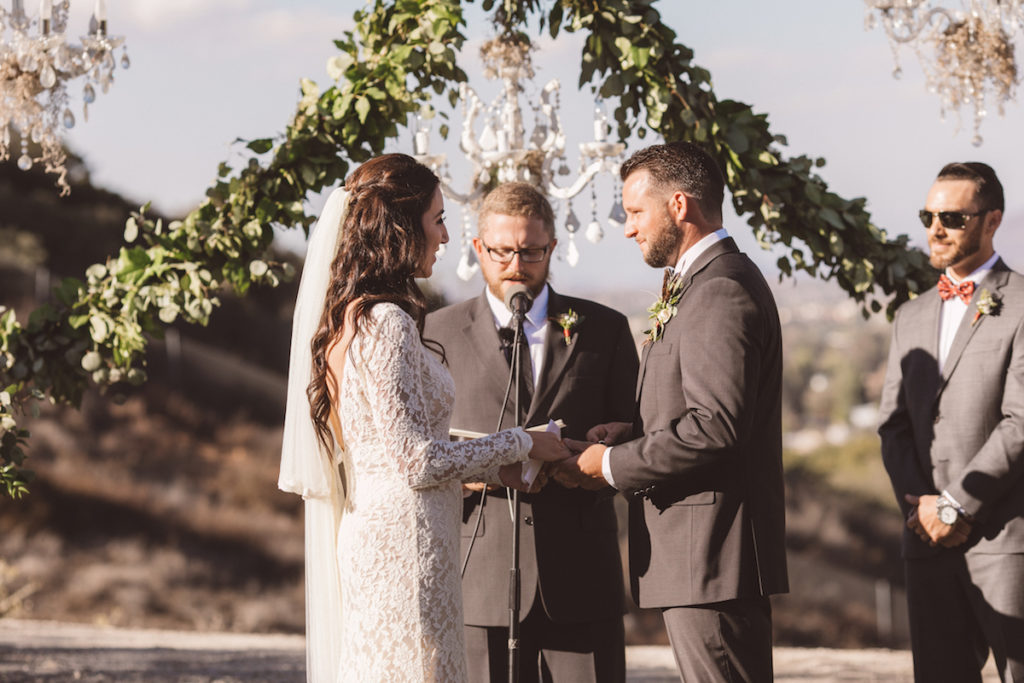 Lauren remembers her favorite one for Brent: “I promise to roll my eyes with you and not at you.

The celebrations were by no means understated, with a total of 257 guests along for the ride.

The couple’s only readings were their vows to each other; they wanted to keep it short and simple but still very meaningful. Lauren remembers her favorite one for Brent: “I promise to roll my eyes with you and not at you.”

The wedding flowers, by Katie from Bottles and Blooms, captured Lauren’s vision perfectly. Ample greenery with pops of rich merlot and blush. At the beginning of the aisle was pampas grass in beautiful big vases and at the altar there was beautiful hanging and draped greenery with a vintage chandelier in the middle. The table settings, boutonnières and bouquets were all absolutely stunning. 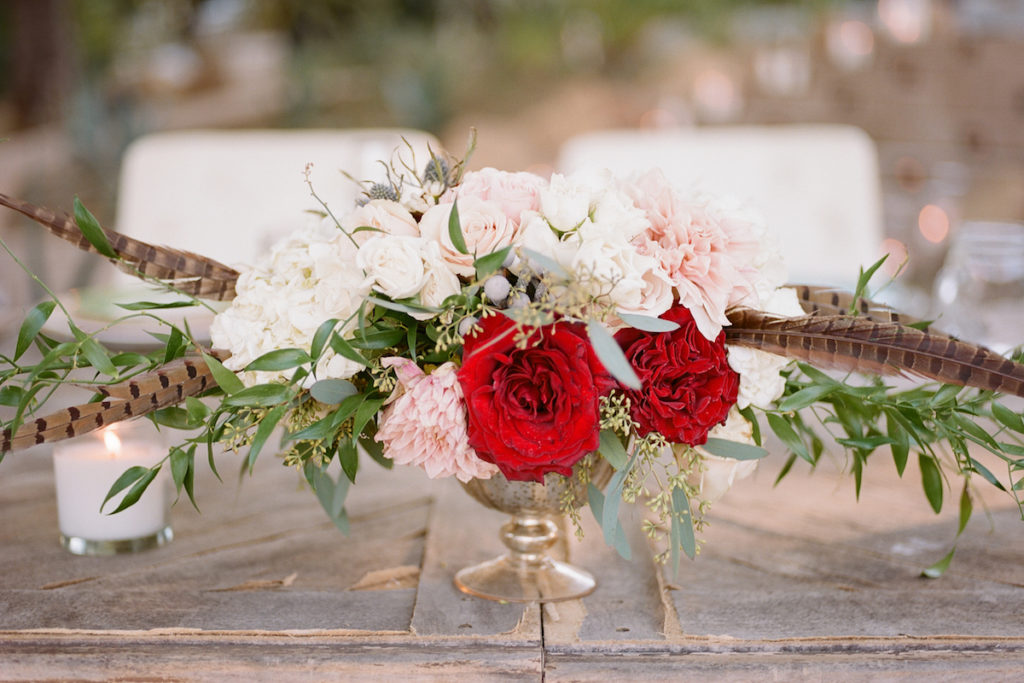 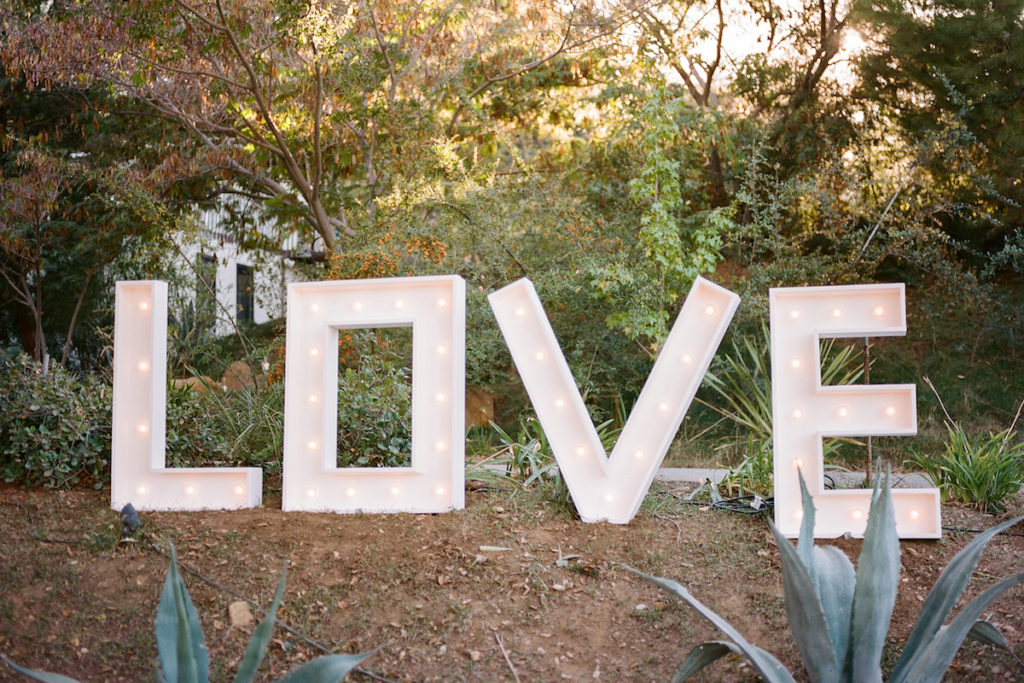 The cake was a small and simple cutting cake with a beautiful and simple flower on top. There was also a desert table with cupcakes, brownies, desert shots and s’mores station.

One of Lauren’s favorite details of the wedding was the massive light-up LOVE sign that Brent built. It stood on a little hill behind the dance floor and made its way into just about every picture taken of the event…it looked so cool! 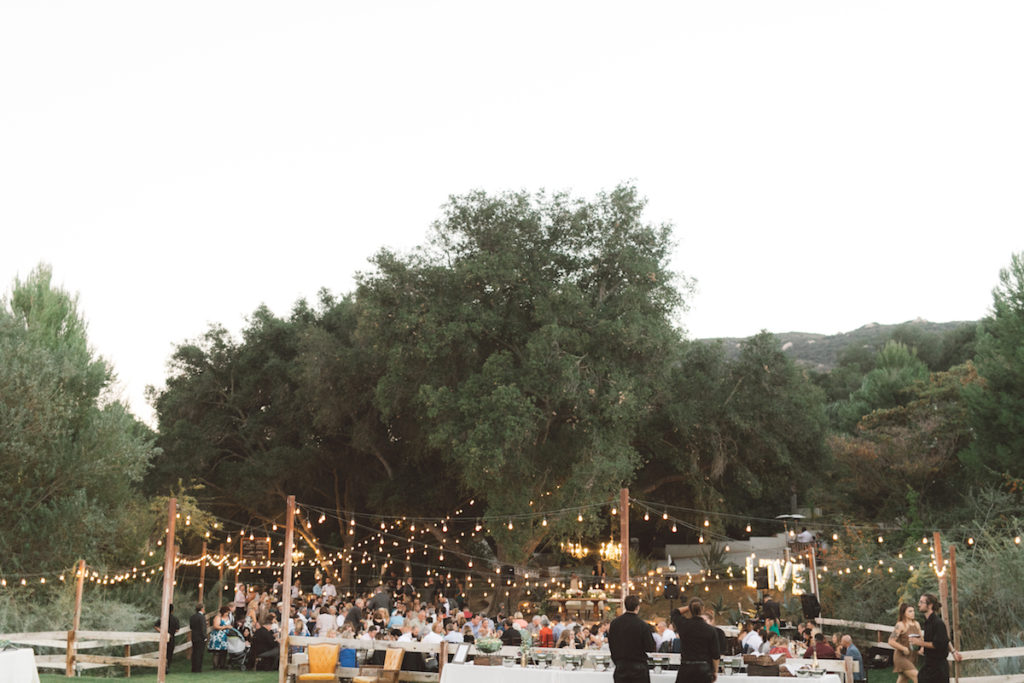 One of the biggest challenges the couple faced during planning was probably the guest list…both their families are huge and Lauren felt terrible about not being able to invite everyone.

Other than that, the day was magical from start to finish and Lauren feels that they couldn’t have asked for anything more. From getting ready with the girls, their first look and pics with their wedding party to the reception, the weather and the music…everything was phenomenal. In fact, they wish they could relive the day from start to finish, maybe the second time round they’d get a chance to sample the food as well! 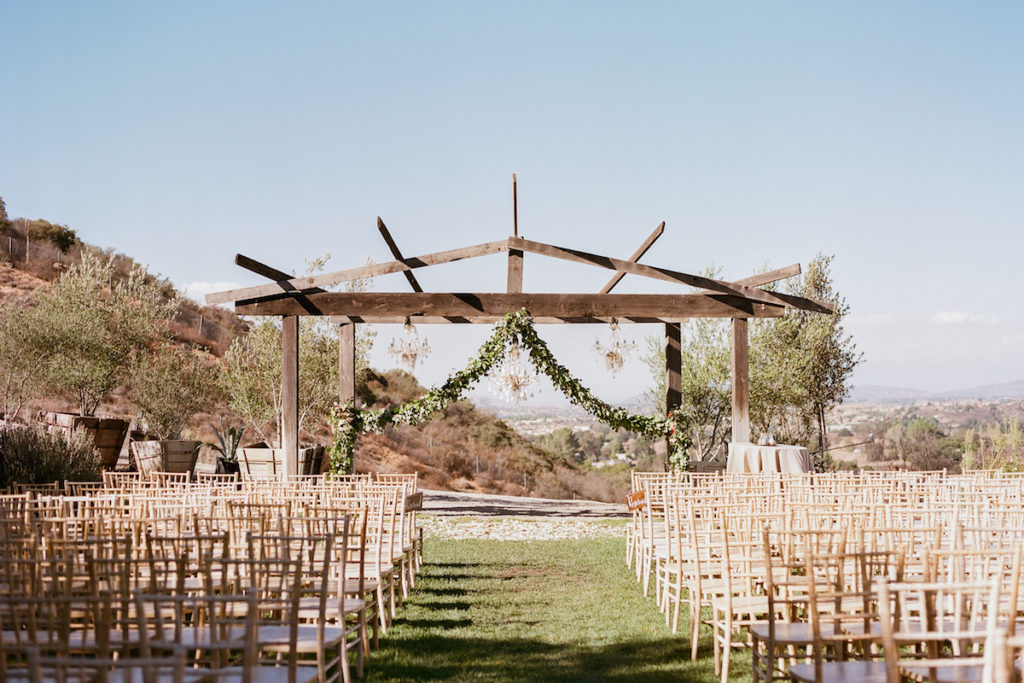