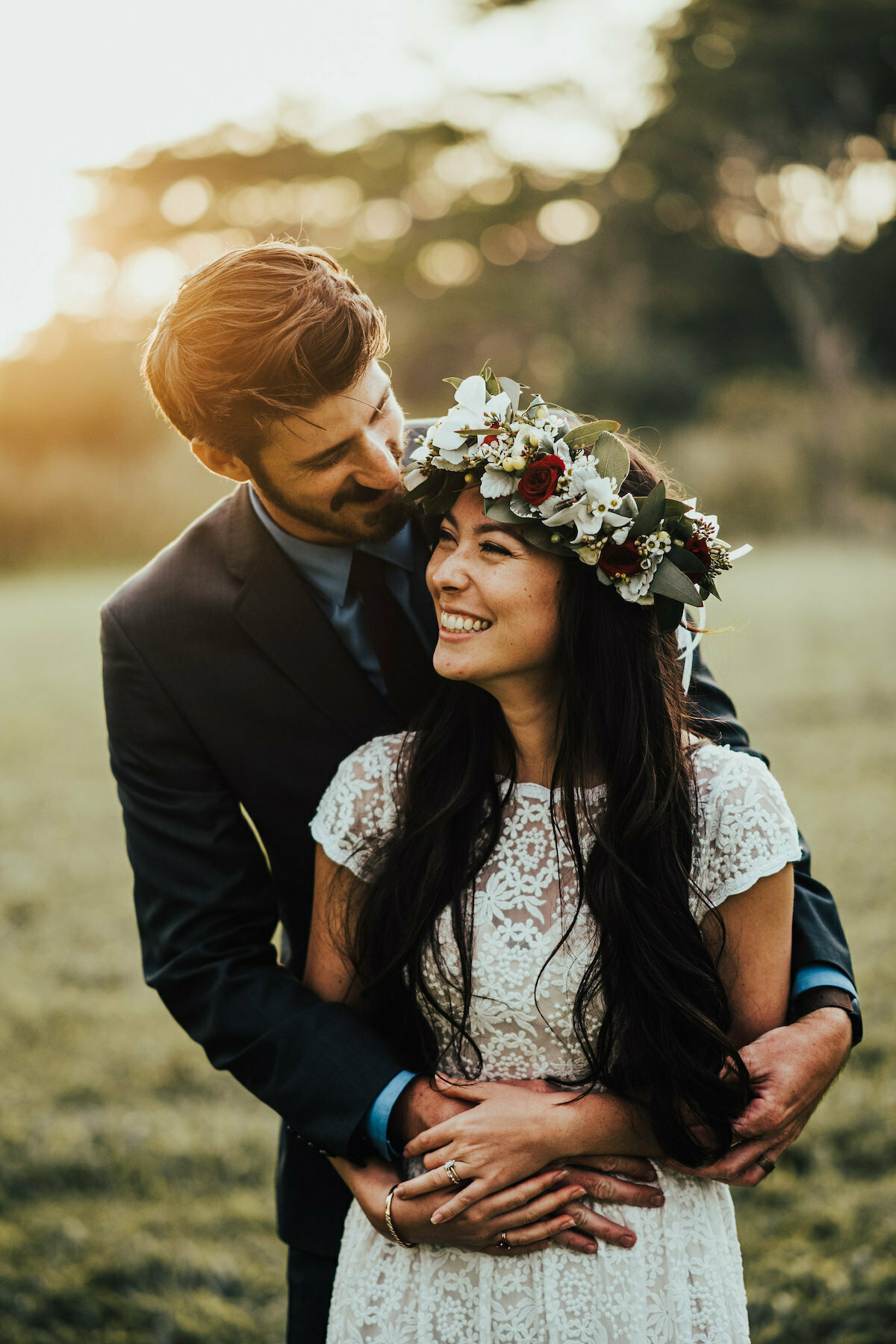 The story Emily and Caleb Grumling is one of those rare romances that you can’t really help but tear up over. The couple met in high school but weren’t even friends until they went to college, so they were definitely not high school sweethearts. Their friendship blossomed at a time when Emily was away at school in Pennsylvania and Caleb was on Maui. Both enjoyed each other’s company during the summers when they’d return to their mutual home island of Oahu.

They bonded over a shared love of the ocean, hiking, racquetball and euchre. After college, destiny saw them both returning to Oahu to live. That was when Emily began to notice Caleb’s finer qualities, such as his hard work ethic, his integrity and his strong relationship with God. As her respect for his character increased, she began to fall for him…only it seemed to her that he viewed her as nothing more than a friend.

She sat in her car in the parking lot and prayed to God, asking that He help her move past this and that her desires fall in line with God’s plan.

Knowing that she couldn’t spend her time pining away, Emily tried to focus her mind elsewhere. She applied for a job as a flight attendant, to be stationed on the mainland. She got the job but as her departure date drew near, she yearned to tell Caleb how she really felt about him. She felt it would save her from forever wondering what might have been. After church one night, she tried to tell him but couldn’t quite square herself. She sat in her car in the parking lot and prayed to God, asking that He help her move past this and that her desires fall in line with God’s plan.

Literally 10 seconds later, Caleb texted her, asking that she come back up to the church to help him with an errand. He asked her to accompany him as he drove to the store but, on the way back, he took a ‘wrong turn.’ He pulled over and poured out his heart, saying that he’d been praying for a while for them to get together. He said that he knew that he’d had to tell her that night. From that point on they were a couple. Although Emily moved, two months later, to Minneapolis and then to Los Angeles for her job, the long distance didn’t stop them from growing closer.

Caleb took a job in Maui for a year and Emily often flew down from California to visit him. On one such visit, Caleb suggested that they take a ferry to the island of Lanai. They spent a beautiful day exploring the island and, towards the end of the day, hiked to a secluded beach called Sweetheart Rock. That’s where Caleb got down on one knee and asked for her hand.

The Search for the Perfect Simple Bohemian Wedding Dress

Having scoured Hawaii dress shops for a dress that suited her laid back style, Emily was up to her temples in poof, sparkle and shine. Luckily for her, a friend in LA had heard about her struggle and clued her in about a brand she’d seen on Instagram, Dreamers and Lovers. The minute Emily saw the exquisite dresses online she was sold; they were the perfect match for her chic bohemian aesthetic.

Emily made a selection of dresses and visited the store the following week in order to try them on. Emily loved that the dresses were made to order, to suit any body type and when she first tried on her dress, she just knew that it was the one. Beautiful, comfortable and not fussy at all, all it needed was a personal twist, so Emily asked to add a small train and Voila!

Emily took it upon herself to do all the wedding planning, which wasn’t easy while living in LA part time. Although her time schedule as a flight attendant was flexible, the constant traveling between Hawaii and California became exhausting.

Wedding Planning for a Bohemian Wedding

One aspect of planning that she did enjoy was working on some of the projects with Caleb, he’d teach her to use certain tools so that she could work alongside him as he built things for the reception. At times when the wedding planning seemed to be taking up all their thoughts they’d take breaks and just enjoy each other’s company without stressing over preparations.

Caleb built special planters for the table centerpieces and the pair went to a succulent nursery to find worthy candidates to plant in the boxes. The nursery babysat the planters for six months until the wedding and by then the boxes were full and luscious. All other floral arrangements included plenty of greens, whites and burgundy, just as Emily had requested.

The decision was made to hold the reception at Emily’s uncle’s ranch in Wahiawa. This was definitely Em’s favorite detail of the wedding. She loved that it was somewhere none of her 224 guests had ever been to before and that driving out there on the dirt road was an adventure all on its own.

While neither Emily or Caleb are the type to do things just because they’re traditional, they still appreciated the meaning behind the traditional wedding vows as used by their parents and grandparents. Neither of them liked the idea of being totally vulnerable with each other in front of the crowd so the letters that they wrote to each other were shared quietly, on their own before the wedding.

The couple’s youth pastor from when they were teenagers performed the ceremony, reading several bible passages, including Ephesians 5:22:23 which, while it does tell wives to submit to their husbands, also tells husbands to love their wives the way Christ loved the church and gave himself for her. The couple believe this to be a passage about mutual love and respect, together with self-sacrifice, all the while glorifying Christ through their marriage.

Because Neither Emily or Caleb are cake lovers, they opted for Acai Bowls at the reception. Each bowl had strawberries, bananas, honey and a scoop of cookie dough, yum!

Why Every Boho Bride Needs a Great Photographer

Even though both the pair is camera shy, their photographer, Tessa Tadlock, did an awesome job of making them feel comfortable and their pictures came out beautifully as a result. Their friend, Ashley DeMello also made a video of the event, which the couple couldn’t be happier with. The couple is forever grateful that the important business of documenting the day was taken care of by such superb artists.

If you’re wondering what the couple is up to these days, they’re both enjoying life in LA, spending tons of time together and also planning on doing some traveling in the near future. As for the long term, once they’ve finished exploring the mainland they’d love to move back to Hawaii to start a family but they are, of course, open to whatever God has planned for them.

Be sure to check out Ashley’s San Diego Bohemian Wedding