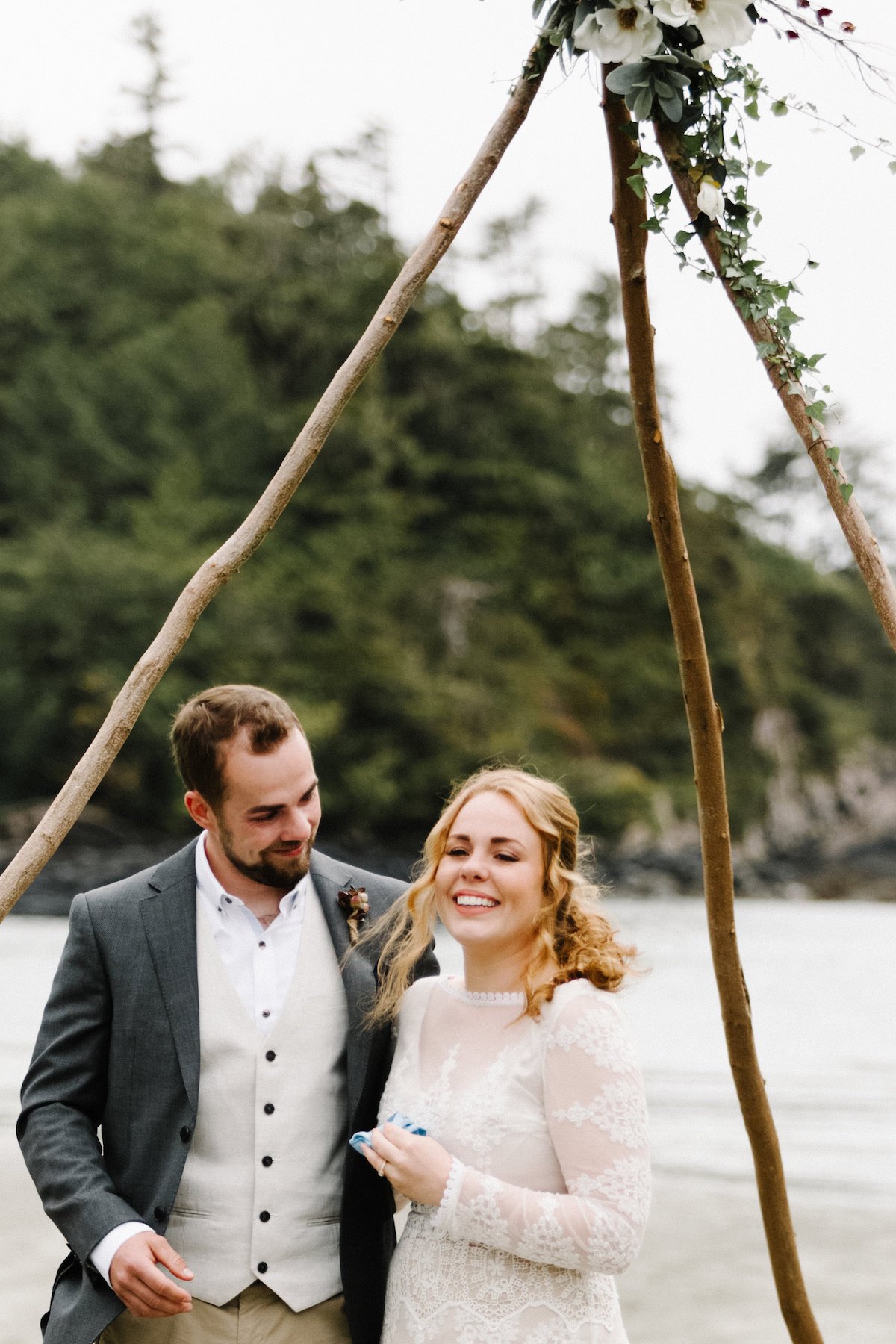 I guess Kara and Devin are what you’d call high school sweethearts, Devin having first noticed Kara back in grade 8, when her red hair streaked past him in a race one sports day. They officially met for the first time in grade 10, when PE role call had them sitting next to each other on account of their alphabetically adjacent surnames Hanson and Gilroy.

They must have hit it off then because here they are, more than 11 years later, sharing their happy boho wedding and love story with us! The proposal happened one year at Kara’s family’s Christmas dinner. It came as a huge surprise to everyone except Kara’s Co-conspirator Mom when Devin popped the big one during a gift exchange…the answer was yes, of course.

The couple decided on a very intimate setting with their 8 closest loved ones, both of their parental units, their brothers and their brothers’ girlfriends. The small party would celebrate the union in beautiful Tofino, on the west coast of Vancouver island in Canada, a breathtaking natural setting that practically demanded Kara get her hands on something dreamy and boho, in the wedding dress department.

Shortly after the proposal, Kara noticed Dreamers and Lovers and their simple wedding dresses on Instagram and while she’d taken quite a shine to the Catherine Dress, it was Lisa’s long sleeves that made her heart flutter and just wouldn’t get out of her mind. She had no choice but to try on that laid back boho wedding gown, made as it was for the wind swept, moody beaches of Tofino…when she finally did, she knew it was the one for sure!

The couple’s celebrant, Barbara Densmore, combined their very favorite things, earth and ocean, to create a ceremony that was just perfect for them. They both wrote their own vows but Kara was literally so choked up on the day that poor Devin had to read both his vows to Kara AND her vows to him! She says that the vision of him about to burst, having to read the second set of vows too, will just get her every time.

Before the event there were guys and gals cabins for the purpose of beautifying. In keeping with her simplistic style, Kara opted to do her own hair and make up, she even helped pretty up the other girls and moms!

The gorgeous pair hired Wren and Rook photography (Adina for photos) and Kai Jacobson (Kai for videos) for their big day. They were overwhelmed by the sense of kindness, care and attention to detail they experienced from both professionals. Kara paid for them all to stay closer to the wedding location so that they could stay the course and not stress about late night tipsy drives.

It was such a success that the couple almost feels like they are part of the family now…they even stayed for the beach bonfire after-party. Just as wedding photographers / videographers should, both vendors went the extra mile to ensure that all involved were 100% comfortable throughout.

Kara had an arbor set up on the beach with flowers all courtesy of her Mom, the florist…( her shop has been in the family a whopping 50 years), who took her to the flower auction so that she could pick the florals for her bouquet. Her non-traditional choices certainly weren’t lost on her mom, however the lady certainly worked her magic, as the final product was magnifique! The Earl Grey roses in the bouquet were a symbol of the lovers’ addiction to the tea by the same name.

Instead of the traditional wedding cake and eats, the party took to the stunningly rustic, log cabin restaurant of ‘Wolf in The Fog’ in Tofino, after the ceremony. The photographer and videographer joined them at the venue and everyone was just blown away by the warm atmosphere and out of control scrumptious cuisine.

Well, you’ve likely noticed a little non-traditional pattern here and you’d be spot on. The couple even got married on their 11th anniversary (wowza). They bought gifts and hand wrote cards for every one in attendance (including the vendors and celebrant), which were opened before the ceremony. There were certainly tears shed left and right but Devin’s Mom and Kara take the prize for crying the most buckets!

only have a traditional wedding when that is what THEY want…because only when you do things YOUR way can you see the day through with absolutely no regrets!

Kara maintains that one should only have a traditional wedding when that is what THEY want…because only when you do things YOUR way can you see the day through with absolutely no regrets!

Needless to say, the couple are insanely happy since they tied the knot, they’re living life to the fullest and not looking back, except to cherish memories of their tiny, perfect Vancouver wedding. We wish them all the best throughout their journey of love and life and we thank them for sharing their story!