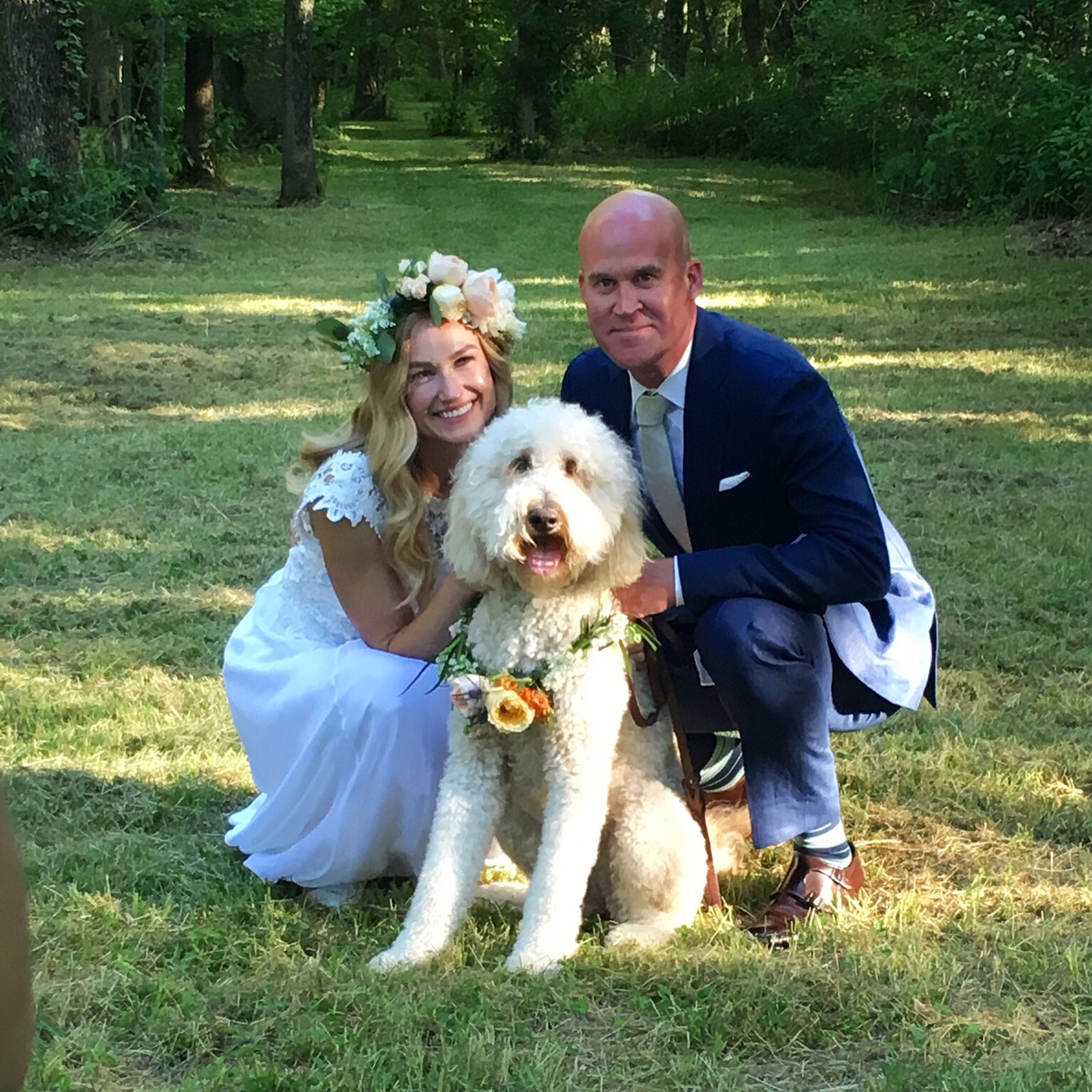 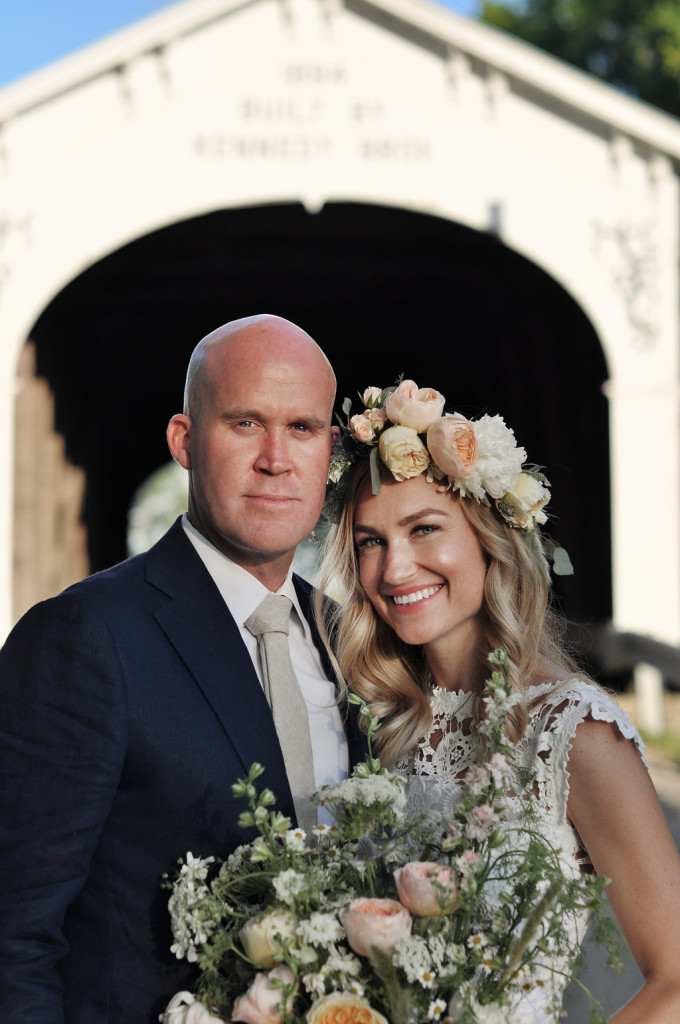 Just looking at the photos of Ashley and Jeff’s special day, I can feel the atmosphere bursting through the screen. The laughing couple, Jeff (in dashing blue with stylish brown leather shoes), Ashley (in an enchantingly simple, boho wedding dress from Dreamers and Lovers, with a flower crown), together with their furry friend, Maggie the Goldendoodle (in her own flower necklace), look like the happiest, laid back family on earth and I’m sure you wouldn’t mind learning a little more about how they got to be so lucky.

Shortly after Jeff moved back to his home town of Carmel Indiana from Chicago (in August 2013), him and Ashley where fatefully thrown together by good intentioned (scheming) friends

Shortly after Jeff moved back to his home town of Carmel Indiana from Chicago (in August 2013), him and Ashley where fatefully thrown together by good intentioned (scheming) friends. The idea was for the big group of friends to spend the night at a John Mayer concert, which they would get to in a friend’s RV (or trusty party bus), obviously the pair expected everyone to be sharing a section of seats and enjoying the concert together.

Well, after seriously hitting it off on the party bus, the pair was surprised to discover that their scheming friends had in fact booked separate seats for them, away from everybody…they would be forced to continue hitting it off for the rest of the night, which they did! Their friends had indeed pulled a fast one on them. For Ashley and Jeff there was no looking back. As fate would have it, John Mayer ended up performing at the same venue on the evening of June 17, 2016…the night they got married.

The proposal was a monumental surprise for Ashley, who always thought she’d see it coming. Jeff came home early from work, saying that they and Maggie should go hiking up at their favorite spot, an old Indian reserve running by the river 30 minutes from their Indiana home. Ashley thought nothing of it, it being a beautiful October day, perfect for a stroll outdoors.

They started their hike and stopped at one of the most picturesque outlook points by the river so that Maggie could have a dip and drink some water. Because the day was relatively cool, Ashley began urging for a move on, complaining that no more cooling off was needed…Jeff though, had other plans.

Ashley became aware that Jeff was mentioning their special spot, saying he wanted to spend the rest of his life with her, discovering other special places. Realizing the situation, Ashley’s heart began to race, she turned away and looked at the ground intently…Jeff pulled her back and got down on one knee to propose, at which point Ashley exclaimed “what are you doing? This is so weird!”

Although she doesn’t remember responding, legend has it her answer was yes, only she kept on awkwardly saying “this is so weird” until Jeff finally responded “you have to stop saying that!”

Although she doesn’t remember responding, legend has it her answer was yes, only she kept on awkwardly saying “this is so weird” until Jeff finally responded “you have to stop saying that!” In closing Ashley reassured him that it ‘was a good weird, but still weird’. 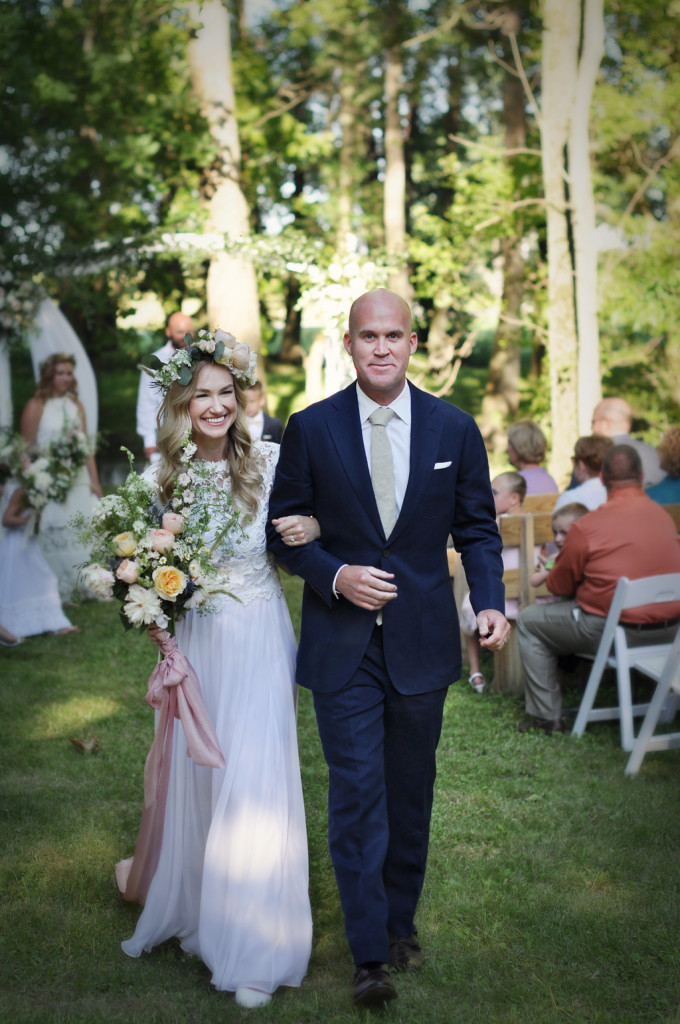 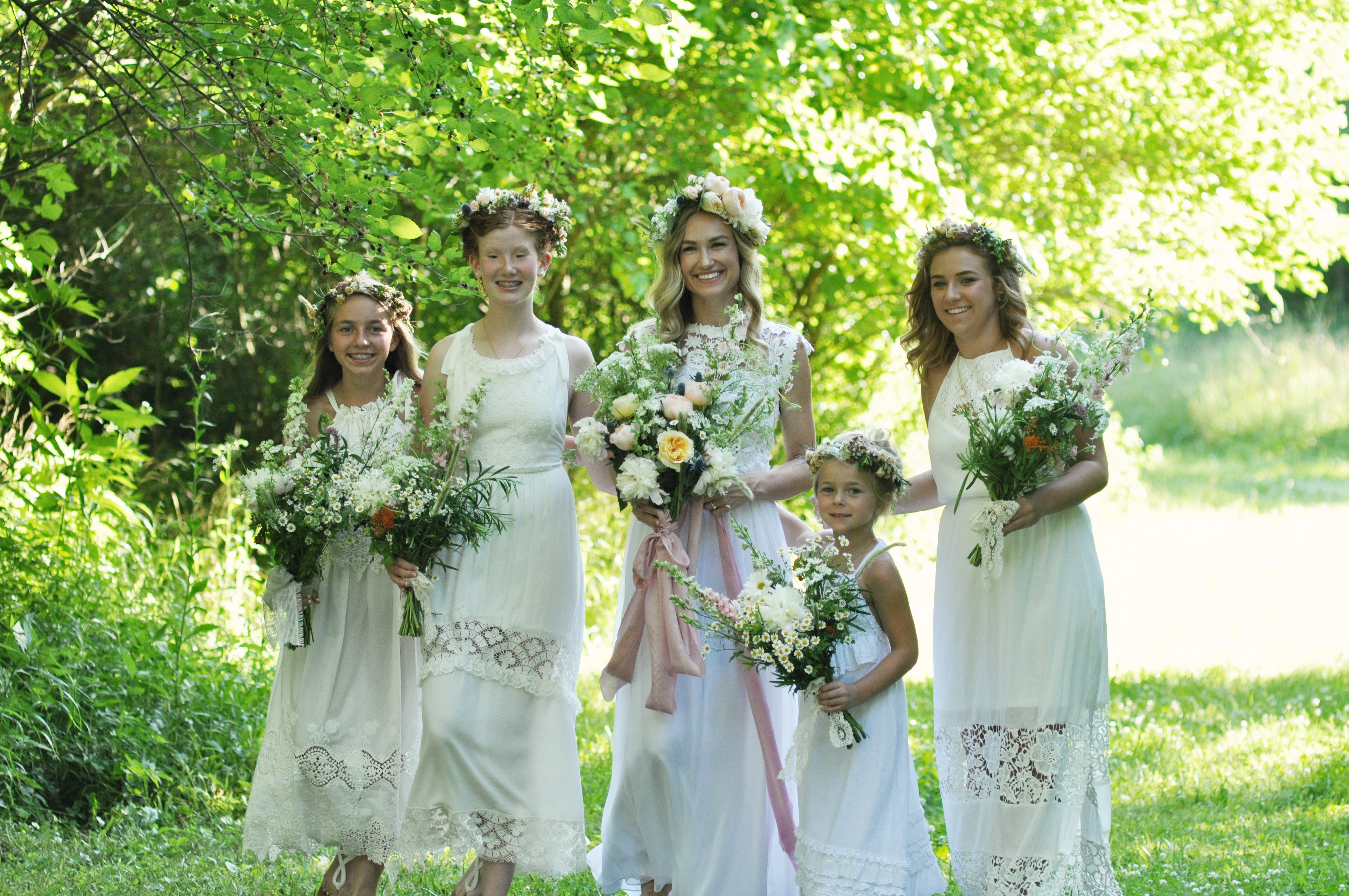 Now, Ashley is one of those free spirited boho brides who likes to stay comfy and the thought of a frumpy, massive, satin wedding gown quite frankly terrified her. She looked forward to the inevitable dress shopping experience with a sense of dread in her heart.

For the first time in her life, she took to Pinterest for ideas, where a stunning Dreamers and Lovers pin linked her to the Etsy shop. The enchanting dress Ashley ended up wearing was actually one of the original dresses she had pinned.

After seeing the happy, laid back brides on the Dreamers and Lovers Instagram pics, Ashley felt confident about ordering her dress online, she provided her measurements and the rest is history…all without ever setting foot in one of those dreaded bridal stores! The dress arrived and the outcome was both beautiful and comfortable, aligning perfectly with Ashley’s vision and the setting for the day.

One of the most interesting things about this wedding was that it actually took place over two days (a Friday and a Saturday), Ashley’s cousin got ordained online and performed the ceremony on the first day. It was an intimate, unforgettable affair with only 70 family members, including Maggie the furry Goldendoodle, set in the picturesque woods near an old covered bridge, overlooking the river where Ashley grew up.

Ashley’s Grandfather started their farm back in the 50’s, his favorite prayer had been the Serenity prayer and she remembers warmly that it was read out at the ceremony and meant a great deal to everyone present. 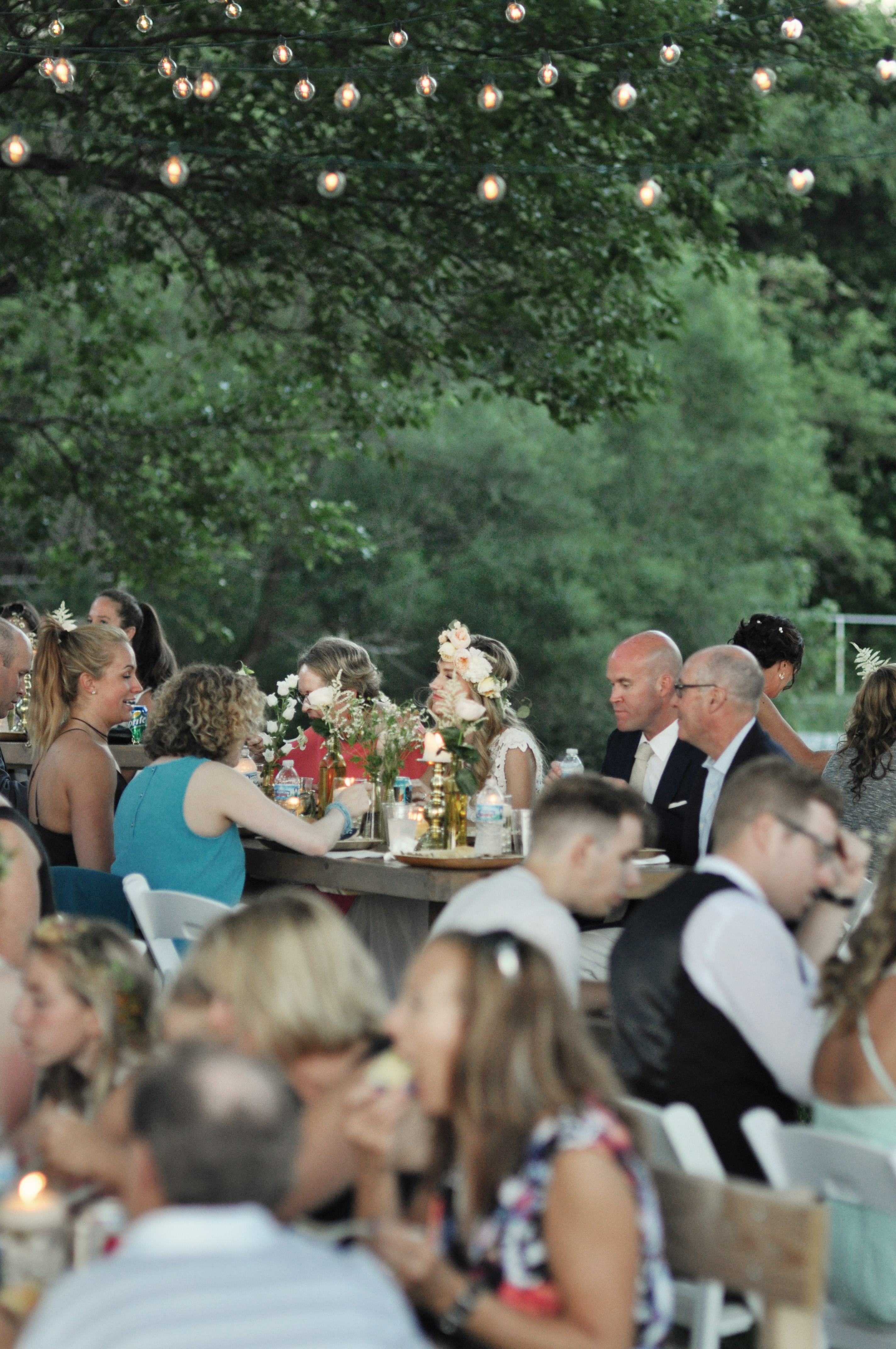 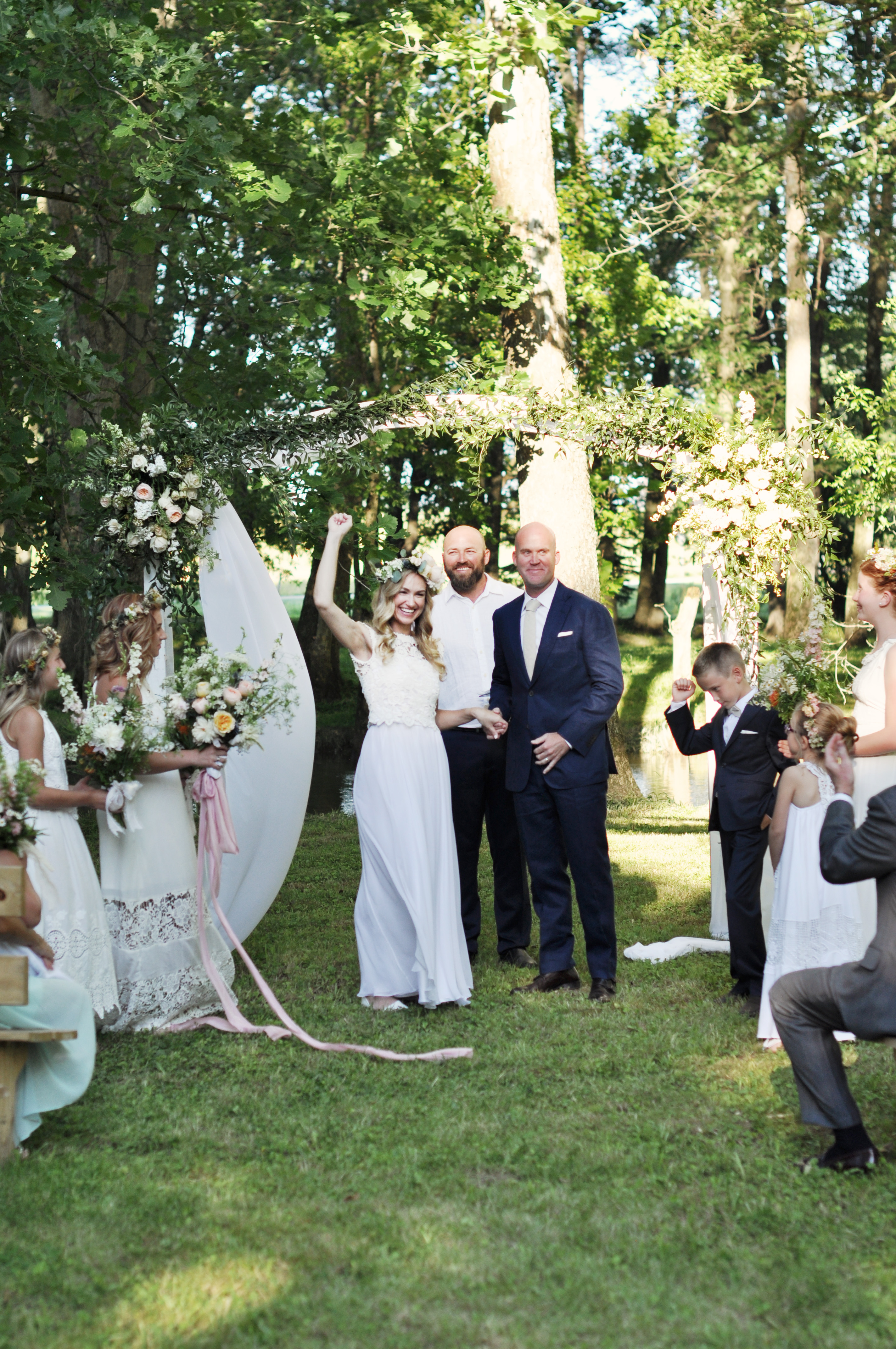 A post ceremony dinner was held on Ashley’s Mom and Stepdad’s 10 acres, just a mile from where the ceremony was held. The dinner was set up on farm tables, under three old oak trees strung with fairy lights. The couple remember that day as a perfect one…in fact, they had such a blast that they forgot to cut the cake and ended up doing it next to Ashley’s Mom’s pool (in their swimsuits) the following day!

The same guests, as well as 130 friends and extended family, were invited to the Saturday night barn party on Ashley’s Dad and Stepmom’s farm, where Ashley was born. The barn was transformed with chandeliers and fairy lights hung from the rafters, with farm tables made out of an old barn from Ashley’s Mom’s property. 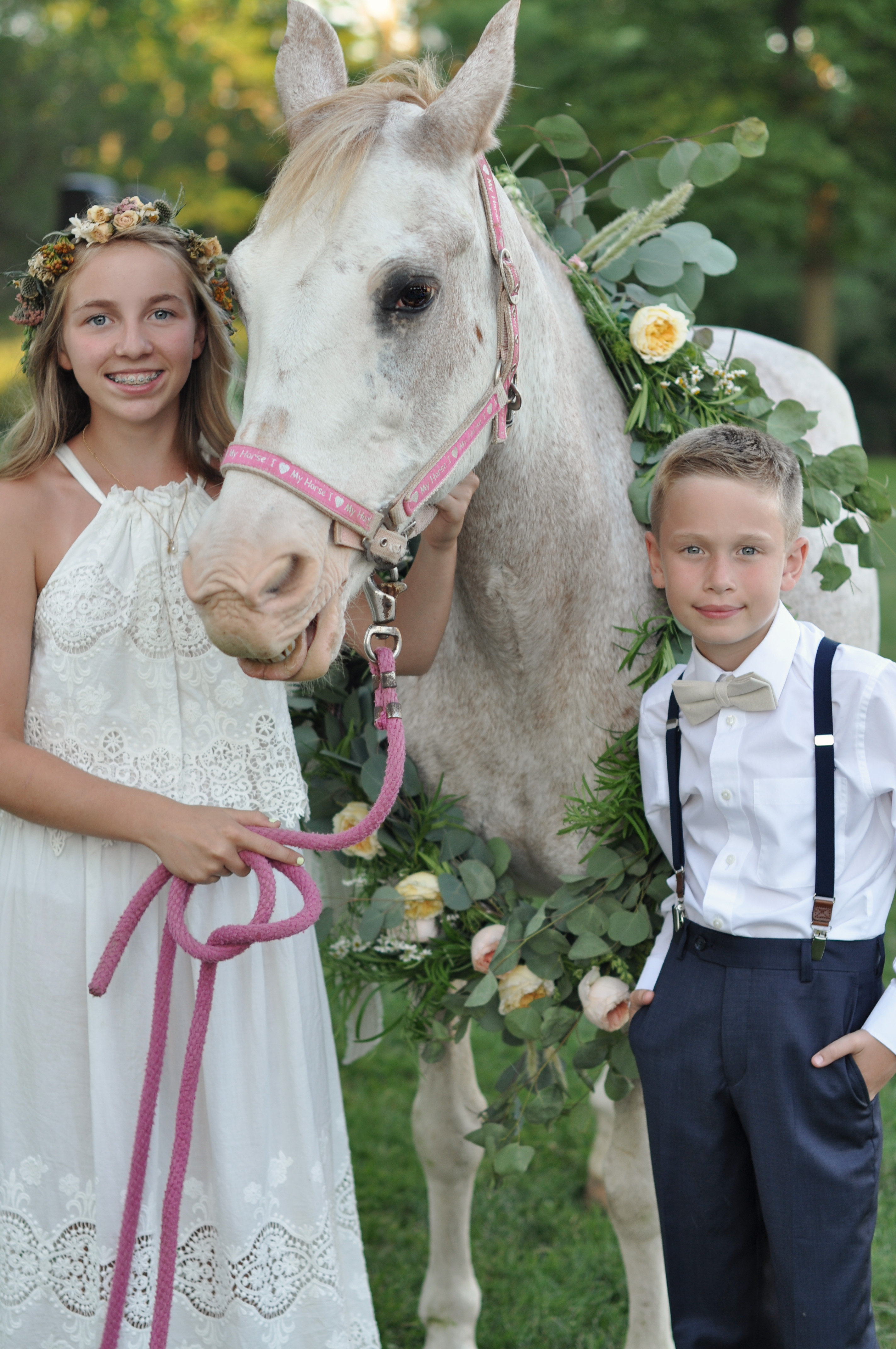 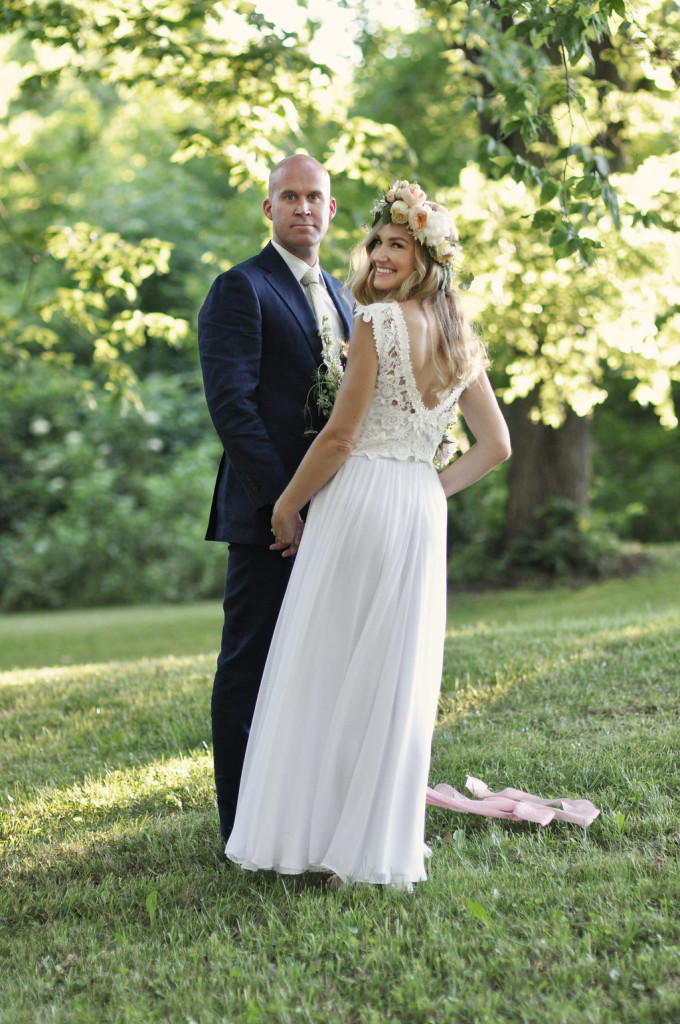 There were food trucks parked outside the barn, with a gourmet donut truck (The Dancing Donut) to provide delicious, fresh dessert. The night was magical, with music, scrumptious cocktails and dazzling fireworks. The couple loved the idea of getting two whole days to celebrate and feel the love with friends and family.

Ashley’s greatest advice for boho brides-to-be is to realize it will all be worth it. Although planning (especially when you’ve got your own business to run) can be overwhelming and stressful, having a special day (or two) to spend with your loved ones is a wonderful gift and those memories are there to last a lifetime…just remember to breathe!

The couple recently sold their condo and are planning on buying and renovating a house in which they can raise a family. They’ve also got a South American honeymoon coming up in January 2017. We wish them all the best and a future full of special places and happy memories. 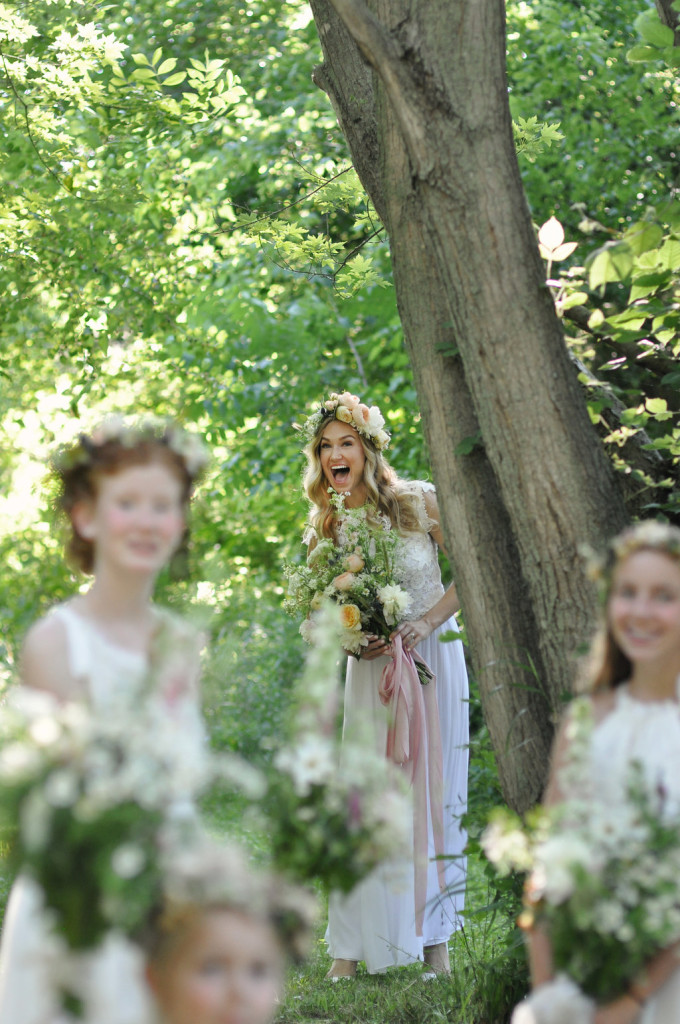