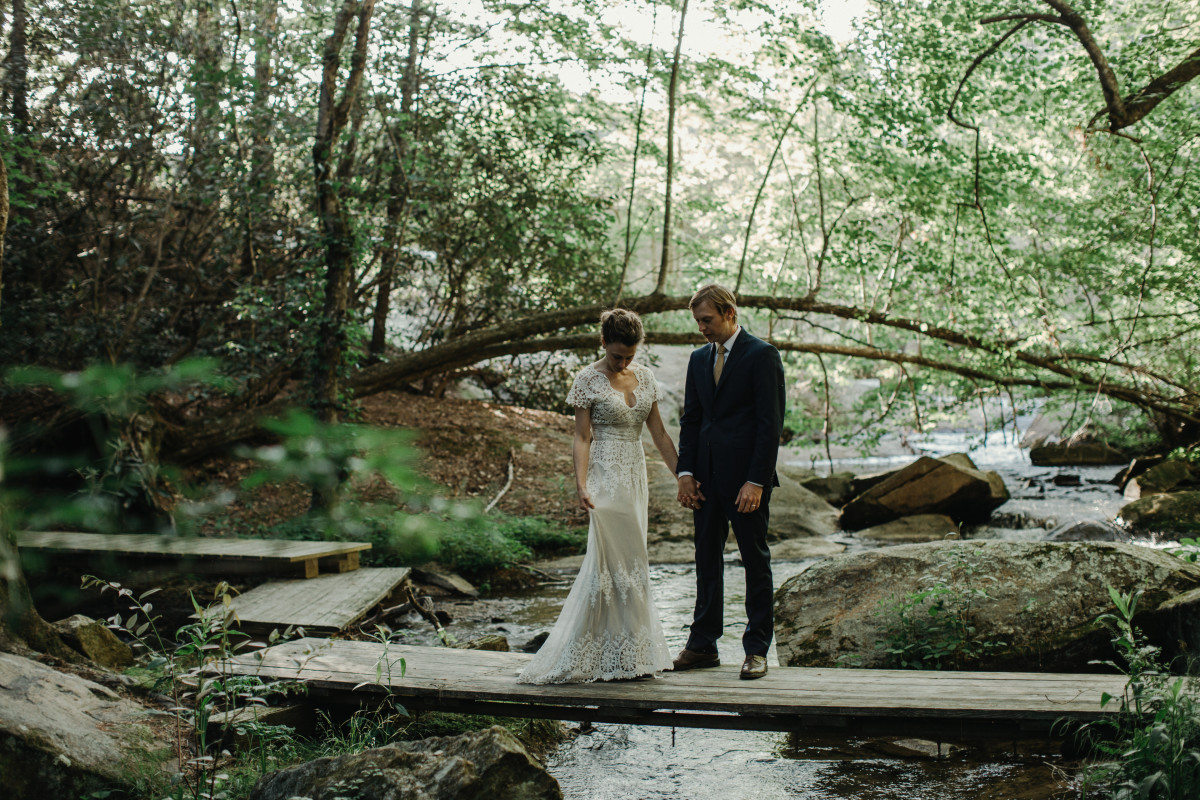 It’s always a pleasure to hear a story about how love can catch you when you’re totally unaware…and Lyn and Drew’s story is exactly that. This couple was friends before they even realized that they were meant for each other. Lyn had bought a house and her good friend, Emily, introduced her to Drew because she needed a roommate. Emily says she knew that they’d be perfect for each other but, at the time, she didn’t say anything to Lyn along those lines (nicely done, Emily). 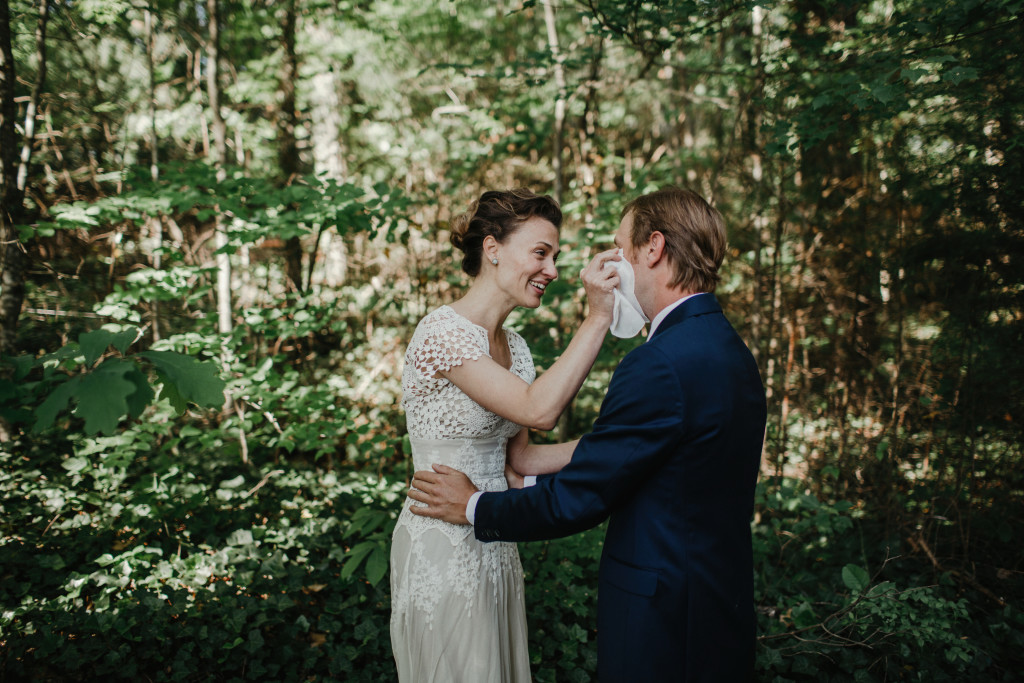 The couple lived together as roommates for two years and became close friends, best friends even. They always thought they’d have to take their families on vacations together one day, never realizing that their families would actually be one single family in the end!

Mutual friends commented on how perfect they’d be for each other but both of them would reply “he/she’d drive me crazy!” Waiting for them in the future, however, was the deepest love and thank goodness, both of them were able to wake up and see the light right in front of their noses.

Drew kept the ring for four months: Lyn knows him as someone who’s patient enough to wait and wait for the right moment to come along…and so he did. Through a Christmas celebration and a New Year’s Eve he kept that ring in his pocket, waiting for the right moment but it didn’t seem to come, until Valentine’s Day (a holiday they never really paid much attention to) came around and the couple were in Drew’s hometown, staying with his mom. It was after lunch, Lyn was exhausted and in need of a nap, but she agreed to go and visit Drew’s Grandpa.

Lyn remembers how she wanted to take a nap right there on Grandpa’s couch but Drew stopped her, saying that he wanted to give her a tour of his late Grandma’s house, which was strange because she’d been there a hundred times…so she obliged. The formal living room was where Drew had spent all his family holidays with his Father and Grandma, both of whom had since passed on. He got down on one knee, saying that he could think of no better place to ask Lyn to be a part of his family. Then he asked, “will you marry me?” The rest, as they say, is history. 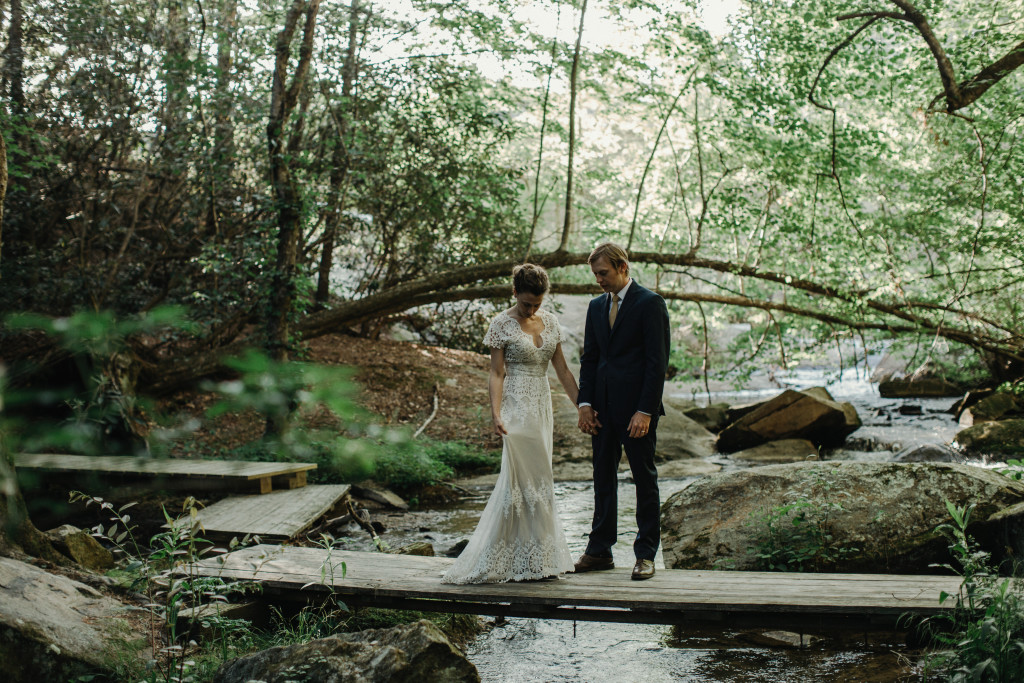 Lyn advice to future brides is that you should take at least one whole month to truly enjoy your engagement, which is actually one of the sweetest of times, before you get bogged down with the details and stress of planning the wedding. In true Dreamers and Lovers style Lyn also offered that tradition is only a good thing if it represents you as a couple, otherwise you need to go ahead and make sure that your celebration is an expression of who you both are. This couple did things very differently and it worked out better than they ever could have imagined.

Lyn continued her search of other boutiques and bridal shops and even purchased a dress from another vendor. Once the dress was made, Lyn tried it on but ‘the feeling’ just wasn’t there, she knew it wasn’t the right dress.

Now, in spite of the fact that their engagement was a year and a half long, two months into it Lyn found Dreamers and Lovers, although she didn’t commit to any of the dresses she loaned to try on because she felt it was still too early to decide. Lyn continued her search of other boutiques and bridal shops and even purchased a dress from another vendor. Once the dress was made, Lyn tried it on but ‘the feeling’ just wasn’t there, she knew it wasn’t the right dress. Lyn had never thought that the dress would be so important to her and was surprised by the way the dress just didn’t feel right.

When Lyn went back to Dreamers and Lovers, new designs had been posted and she immediately spotted one that seemed to pull on her heartstrings. She knew that this was the one, it was right for her and for their planned celebration. The minute she tried it on she felt beautiful and she looked breathtaking too. Looking at pictures of Lyn and Drew on their wedding day, she couldn’t have made a better choice. The simple but elegantly romantic choice she made was perfect for a summer’s day, beautiful and comfortable enough to truly enjoy an outdoor wedding in.

The couple had already been together close to a decade when they tied the knot so they decided to make the wedding more of a ‘family reunion weekend’ than a regular wedding. They rented a summer camp, Camp Pinnacle in Flat Rock NC, for the whole weekend. All 200+ guests would sleep at the camp and truly enjoy a weekend away with he rest of the clan.

An important detail for both Drew and Lyn was the music…so they took a chance and asked their two favorite bands if there was any chance they could play at the wedding. To the couple’s delight, both bands answered yes. Both bands came and played, one on Friday and one on Saturday. All the band members spent the weekend living it up and partying like they’d always been part of the family. Lin says you never know unless you ask and she is so grateful that she asked. She says that if you have a favorite band you should at least try to get them to play. For Lyn and Drew it was a life changing, memorable and unique experience that they will think of with joy for the rest of their lives. The trick, Lyn says, is to be resourceful. After all, you never know, your favorite band might actually play if you just build up the courage to ask.

The photographers were a married couple, who live in the mountains outside of Asheville, named Jamekay and Arlie. Lyn holds that their incredible talent allowed them to somehow capture the new couple’s most touching moments, as if through a spiritual lens. Lyn and Drew were taken aback by their photos and felt blessed that the couple also joined in on the celebrations as if they had always been a part of the family.

Rather than have a big cake made, which might spoil over the course of the weekend, they opted for a selection of cookies. A dear friend, who also happened to be a baker, baked a few favorites for them; including chocolate chip, pecan cranberry and sugar cookies, with Oreos thrown in at Drew’s special request.

The camp created such an exquisite, natural backdrop that it wasn’t necessary to go overboard on flower arrangement. The flower shop in Charleston helped Lyn and her mom to come up with some classic arrangements that really fitted their vision for the weekend.

They decided to get married on the Friday, so that they could spend the weekend stress free, just enjoying everyone’s company.

They decided to get married on the Friday, so that they could spend the weekend stress free, just enjoying everyone’s company. Lyn says that the love, appreciation, joy and respect throughout the event were just so expansive that the vibration was tangibly high and powerful.

Lyn says that managing other people’s expectations can be challenging but it’s important to take a step back and realize that no matter the details, this is still going to be the best day of your life. It’s about love and family and that’s all that really matters so enjoy!

Drew says that for them every day is their honeymoon. They are more in love than ever and respect each other more than ever. To Lyn, their love feels sweeter even though she never thought it could be sweeter. Now comes their life together, celebrating themselves as individuals and as a couple, learning more from each other every day and loving the journey as they roll along hand in hand.

For both Drew and Lyn, married life is better than they ever imagined. The wedding may have been fun but the marriage is even better. It’s good to hear these bride stories and realize that all around us is a world so filled with love and romance and for each one of us destiny is there for the taking, maybe even staring us right in the face!

Drew and Lyn, we wish you a lifetime of bright dreams and wholehearted love and for us it’s truly an honor to have been, even for a moment, a part of your story! 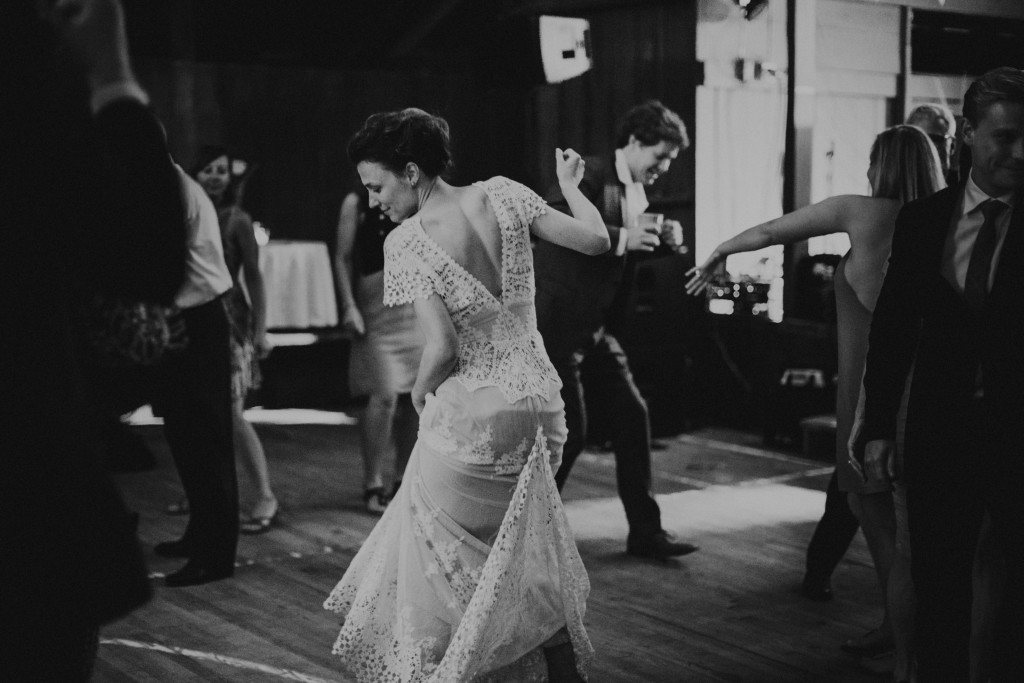