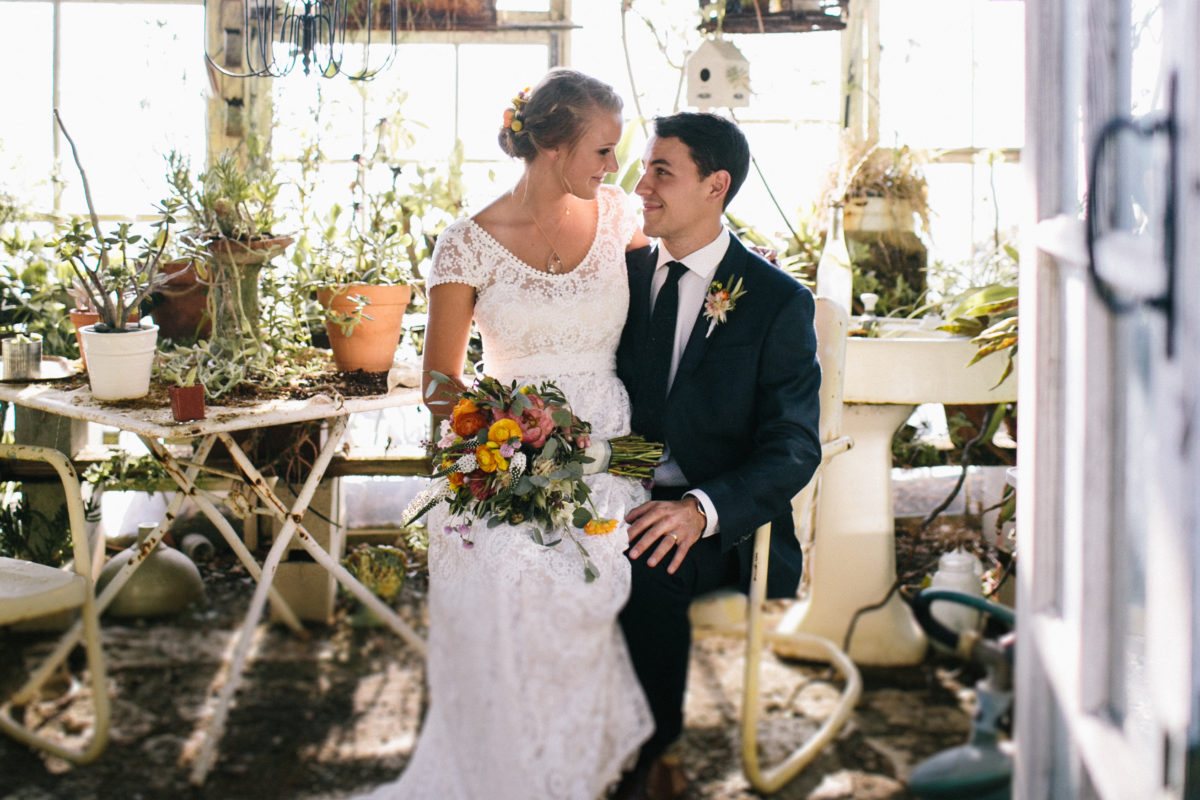 Spencer and Molly’s Perfect Day in the Sun

Wow, I can’t stop looking at the incredible wedding photos, courtesy of Briana Mary, of Spencer and Molly’s laid back, ranch wedding in Pala, CA. It’s not just the classic, old school atmosphere of the ranch setting but all the unique little details that really make this wedding look like a boho dream come true. From the dressing room pics of the girls in their matching, custom robes, reclining on the great big wooden bed with Native American artifacts decorating the wall behind…to the dapper groomsmen in their stylish getup, suspenders and cool, matching tan leather shoes. Nothing is out of place…it looks like no detail went unchecked and it must have been an unforgettable experience.

This gorgeous young couple met five years ago, as seniors, when they attended rival high schools and were introduced to each other by mutual friends. A month later they were dating and they chose to continue doing so, even though they would be attending colleges that were far apart. We’re glad they did; they finally found themselves back in the same city and just look at them now. 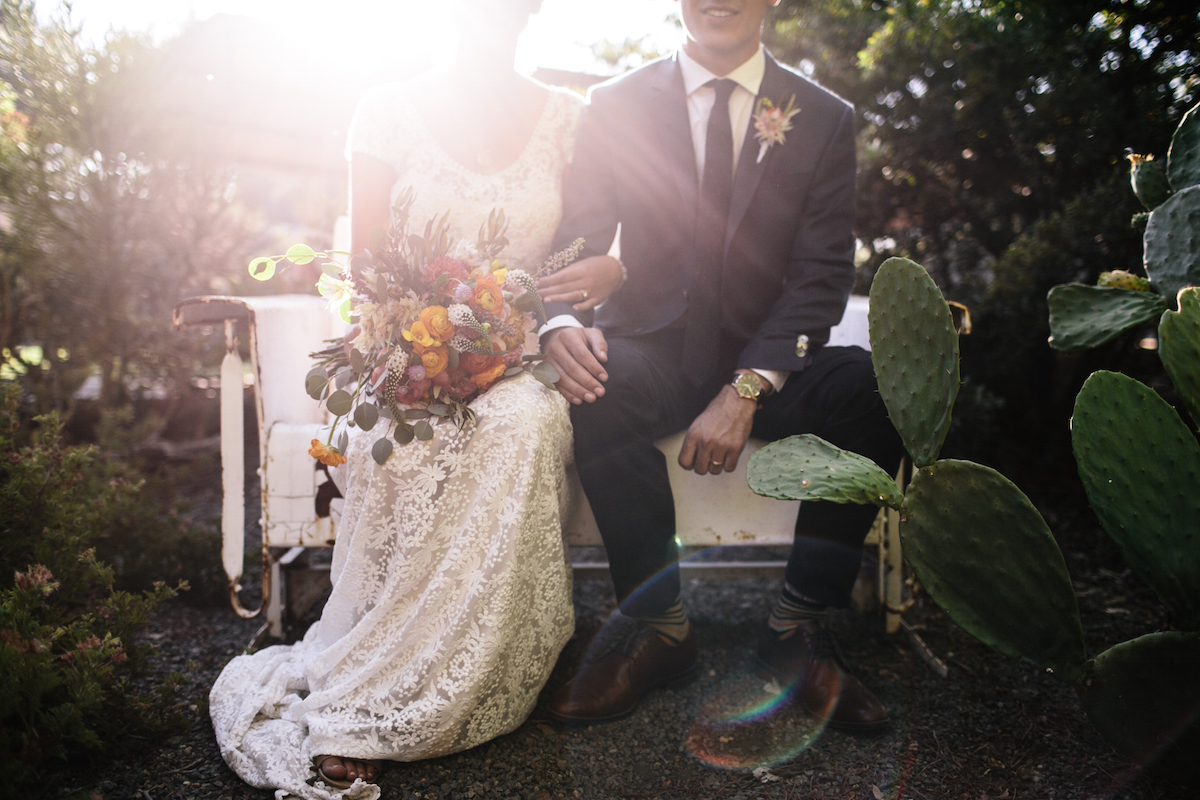 I thoroughly enjoyed the story of their proposal, so romantic and it shows…not only is Spencer super dashing but he also knows how to think out of the box! The couple visited Laguna Beach for a weekend, to house-sit for Spencer’s uncle…On day one they spent a romantic afternoon at the beach, soaking up the sun, followed by a pizza-picnic that evening (their all-time favorite). Spencer asked if Molly would appreciate a sunrise excursion to the beach the next morning. At 5am he woke her up (they must be morning people!), it was pitch dark when they got to the beach and it was clear that Spencer was ultra-pumped to get there…hmmm.

He led her to a special spot and asked her to close her eyes because he had a gift for her. When she opened the gift she found it was a Bible…but not just any bible

As the sun rose, they ambled down to the sand. He led her to a special spot and asked her to close her eyes because he had a gift for her. When she opened the gift she found it was a Bible…but not just any bible. Engraved on the cover was Molly’s first name, followed by Spencer’s last name (seriously!?). On the inside of the cover a question was written: “Will you marry me?” Well of course I will, Spencer…I’d be hard pressed to say no, now that your surname is already engraved on the Bible!!! When Molly looked up Spencer was down on one knee. In tears and over-the-moon-excited, Molly, obviously, decided to oblige. 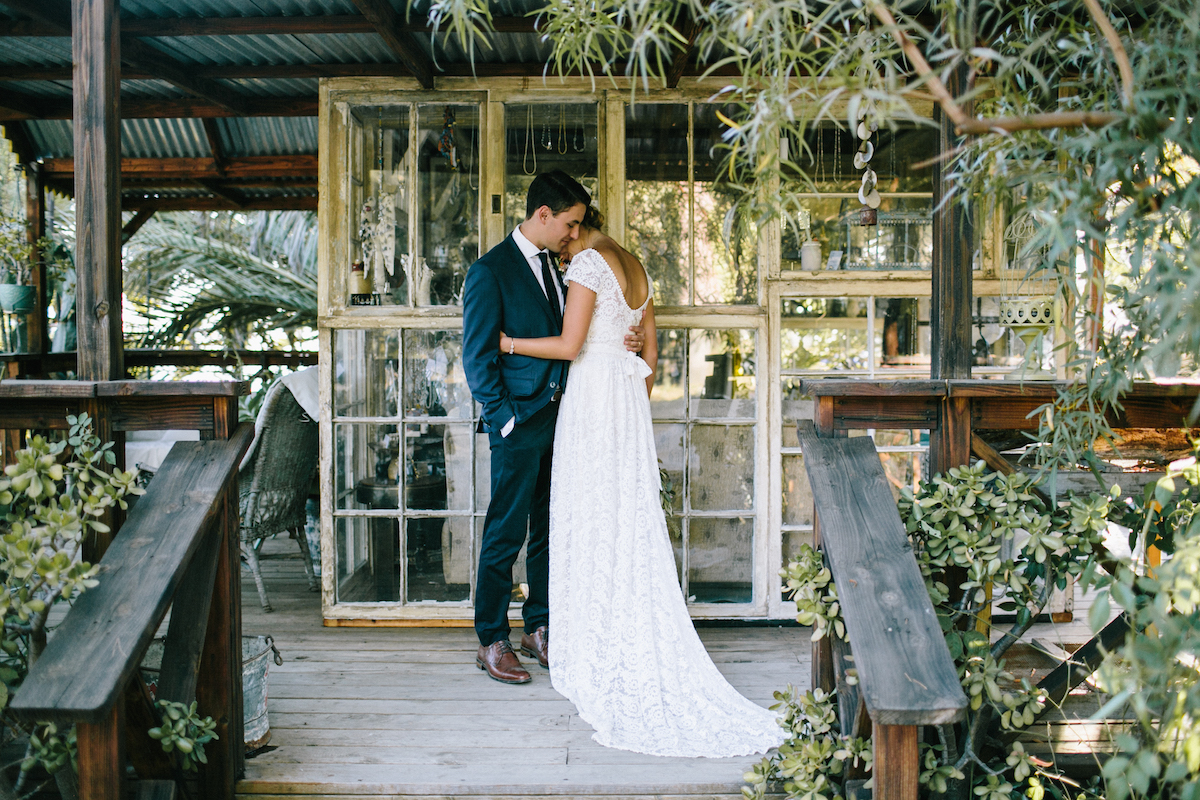 When the couple drove back to Molly’s parents house, both families had gathered for a big family BBQ, it was a perfect day and a fit forerunner for what was to be a perfect summer wedding. What made the proposal even more romantic was the fact that Molly later found out that Spencer’s uncle hadn’t even been out of town for the weekend…he had been camped out in a hotel in town for the night, making the proposal a true family effort!

When it came to choosing a wedding dress, this is a classic D&L story…Molly was under stress! Spending far too much time in big-name stores, she was feeling overwhelmed and utterly discouraged. There were countless dresses to chose from and try on but none of them (none of them!) fit her personality. By that time Molly was thinking that maybe she just wasn’t one of those brides who would know that ‘this is the one.’ She was thinking, sadly, that she was going to have to settle for a dress that was simply OK. Luckily for Molly, she came across Dreamers and Lovers while browsing Pinterest. She fell instantly in love with the laid back collection and knew that she had to try them on. As it turns out, with the very first dress she tried on, Molly was transformed into one of those brides who knows they’ve found ‘the one.’ 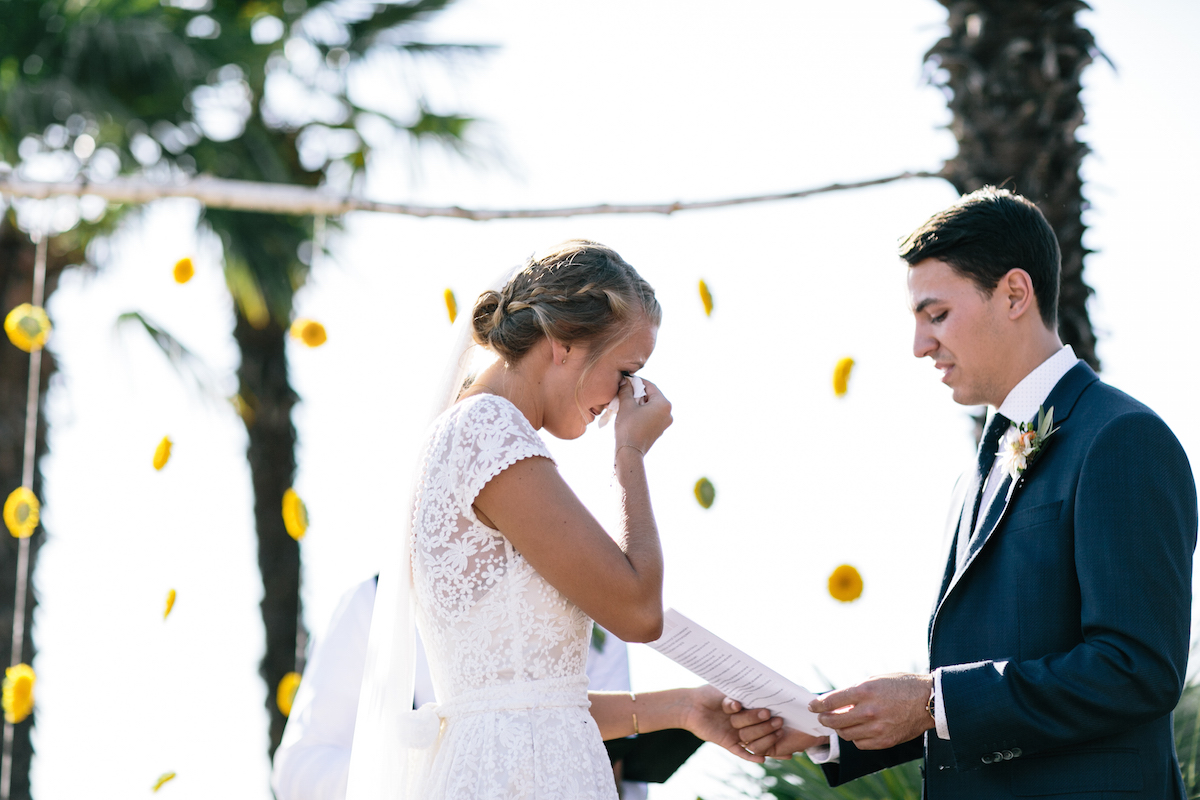 It was to be a medium sized wedding, with 160 guests attending at the stunning ranch in Pala, CA. What’s more, both families got to stay over at the ranch for the weekend. They went up on the Thursday and spent a full weekend relaxing, swimming celebrating and enjoying summer family time in and around the stunning old ranch house. Family is of paramount importance to the couple and both of them were appreciative of the chance to enjoy a fun filled, family vacation leading up to the wedding. Spencer and Molly decided on what was important to them, as a couple and they stuck to it…they wanted a laid-back celebration that was full of love, family and friends and that is exactly what they got.

The flowers were one of those details that really stood out in the photos, beautiful wildflower arrangements that look as though each flower has been individually chosen and picked. Molly’s vision of loose, bohemian arrangements was achieved and expanded on by her florist and the results were quite breathtaking, really unique and very wild! 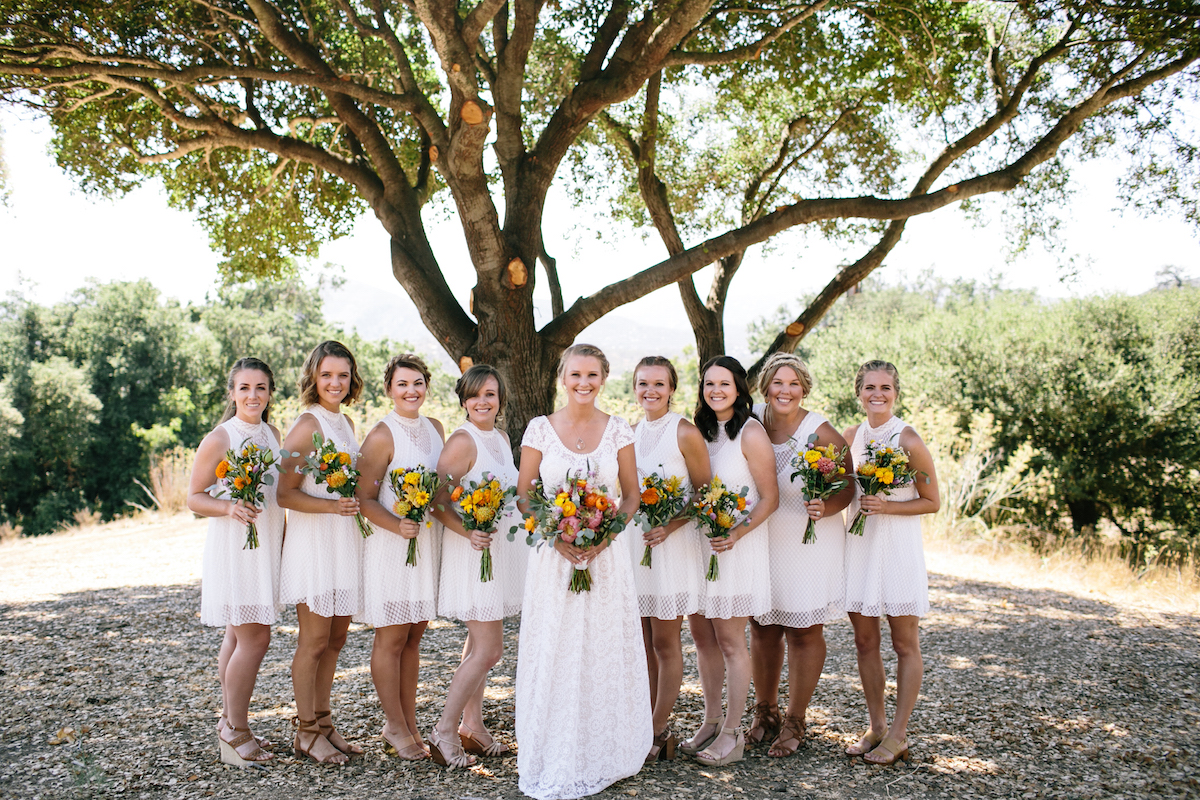 Instead of a cake they opted for a dessert bar with just a small cake for the couple to cut. The guests enjoyed lemon bars, brownies, cheesecake bites and eclairs, yum!

A few bible verses were read at the ceremony and the couple took communion together while Molly’s sister sang ‘Christ Alone.’ Vows were personal and intimate, self-written by the couple…some of Molly’s favorite lines were “I will always be your friend, your adventure partner and someone who pushes you every day to pursue your God given gifts. I promise to rejoice with you through the joys in life and to hold your hand as we walk though the trials.” Self-written vows are always a great idea and Molly says that every line was equally meaningful.

One of Molly’s favorite details was the fact that her own brother-in-law, Patrick, married them. He got ordained previously so that he could preside at Molly’s other sister’s wedding. It was extra special for Molly to have a loved one conducting such an intimate ceremony, especially since he’s known them their entire relationship. 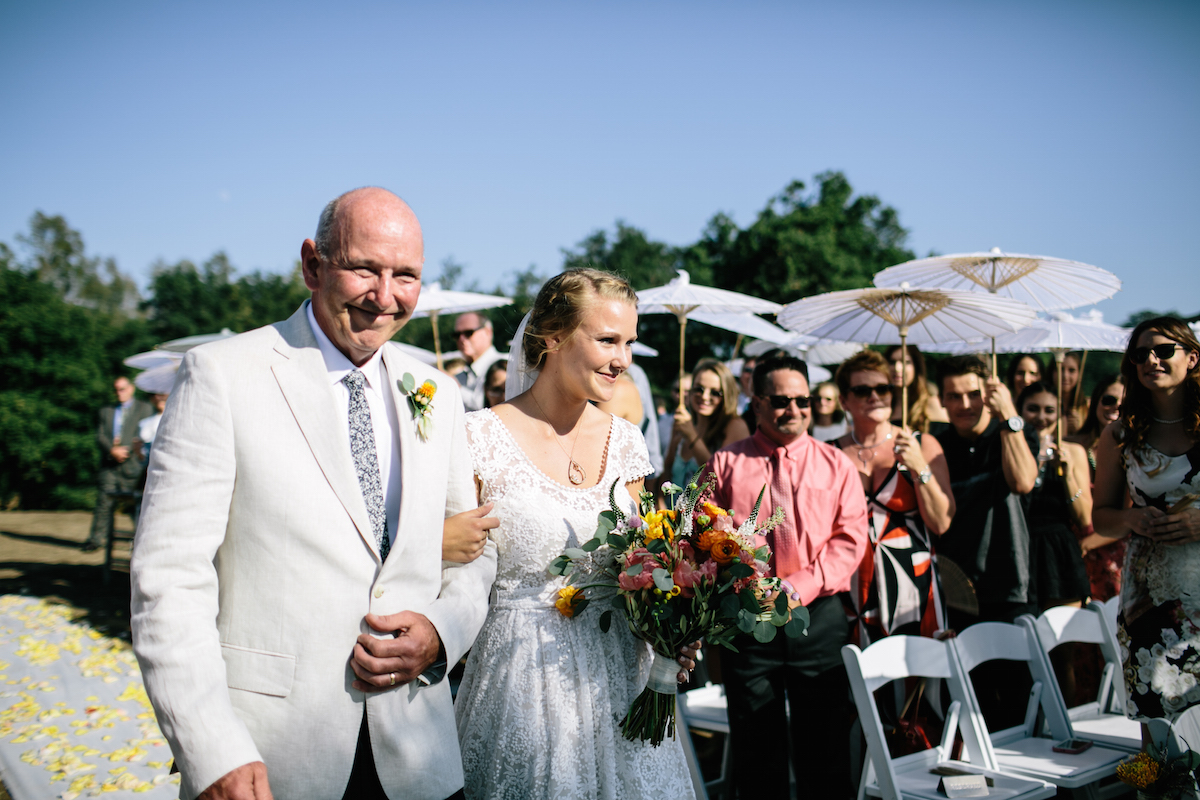 One of the most novel ideas was the addition of disposable cameras at every table…family and friends used the cameras all night, snapping pics of what they thought were the most meaningful. It was such a delight to have the photos developed and sees things from every guest’s unique perspective. What a wonderful idea! 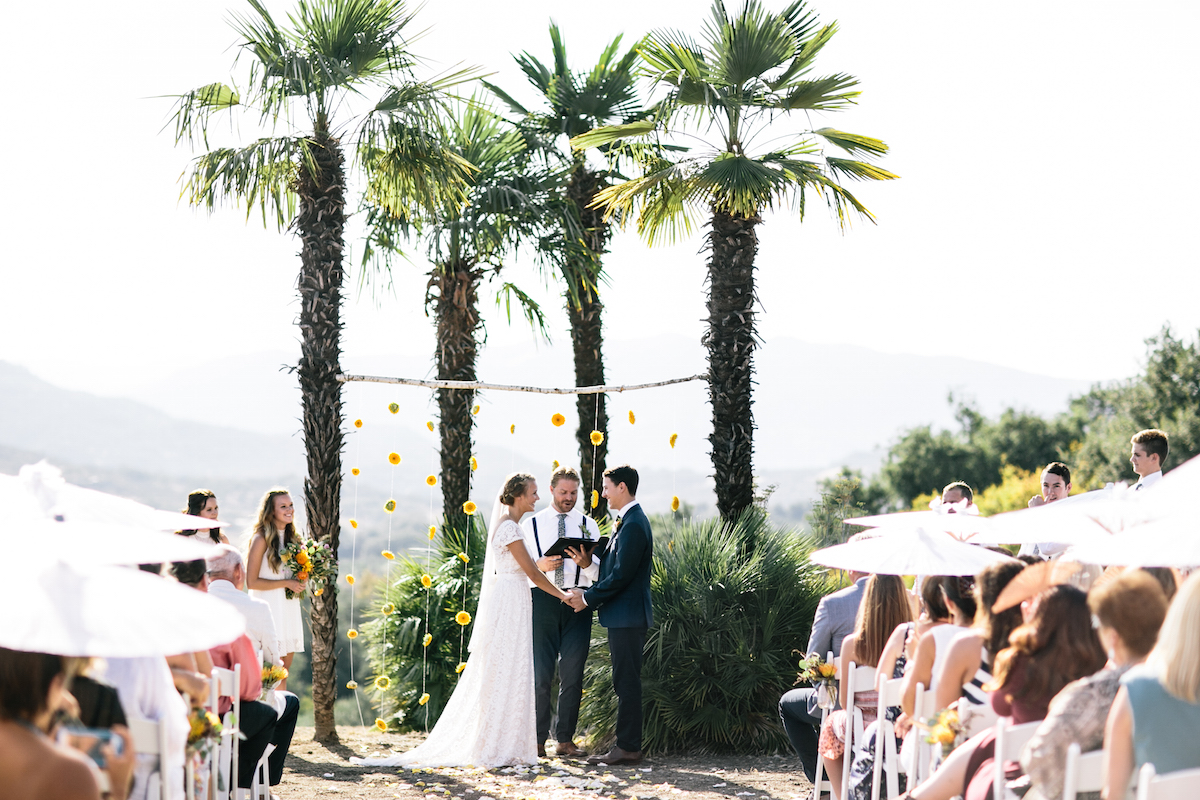 Molly offers this advice to boho-brides-to-be: Never mind people’s opinions and points of tradition…make it your own! It’s about what’s important to you as a couple, remember that. Plus, write your own vows and celebrate!! 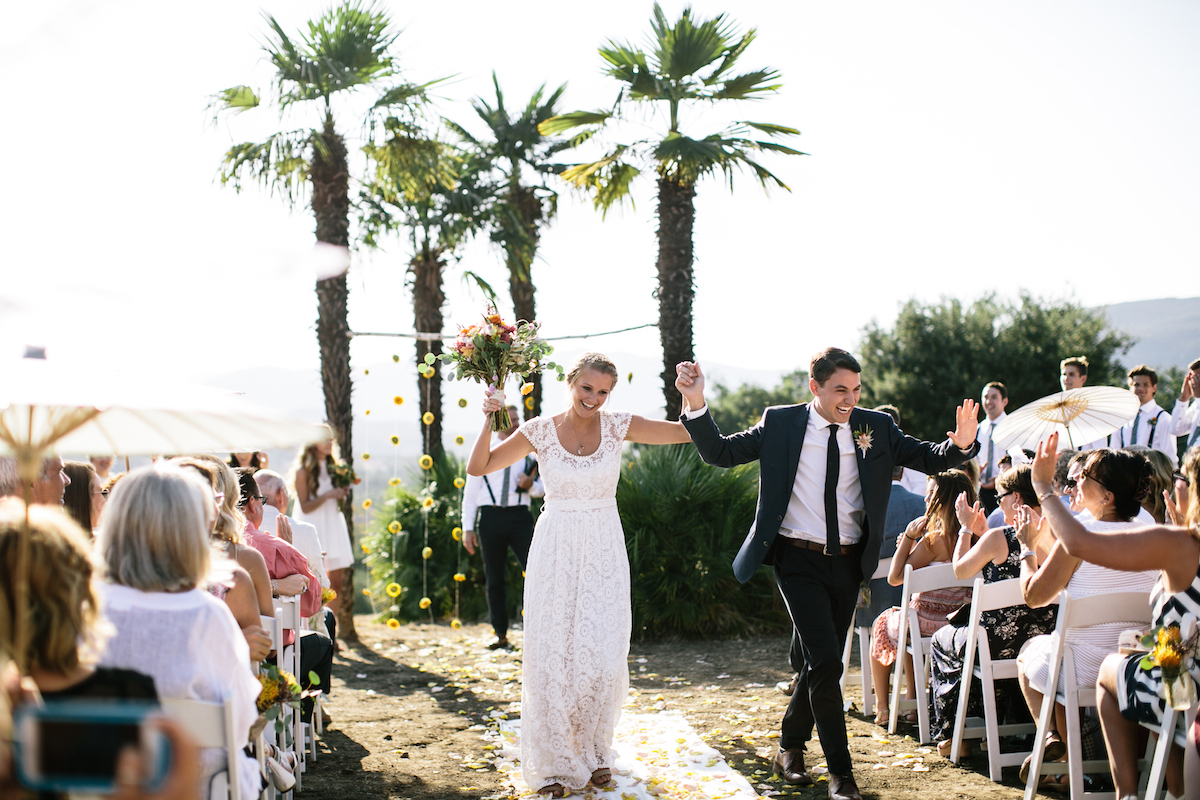 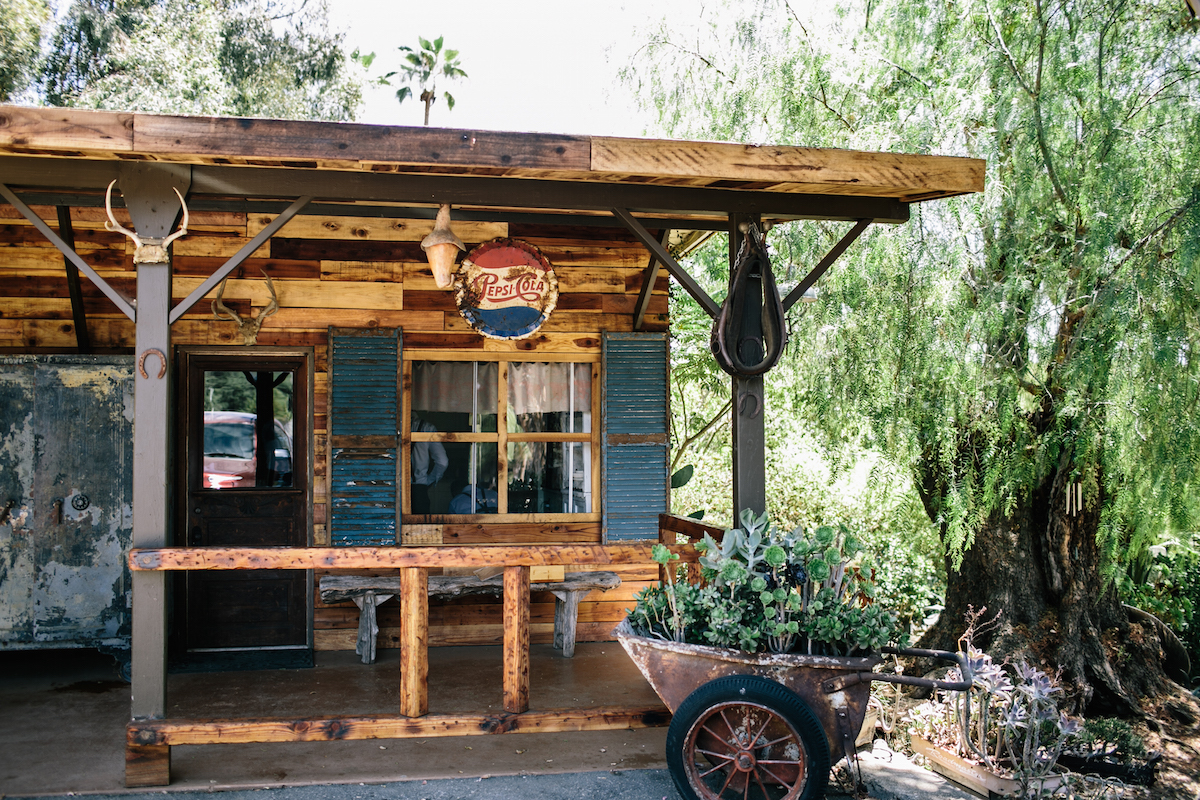 So what’s in the cards for the newly-weds? They are simply enjoying the bliss of married life, planning to get some travelling done over the next couple of years and in the more distant future…to expand that loving family a little or a lot, just how much remains to be seen. Well, we certainly wish them all the best here at Dreamers & Lovers: May their years be numbered long and their lifetimes resound in joy! 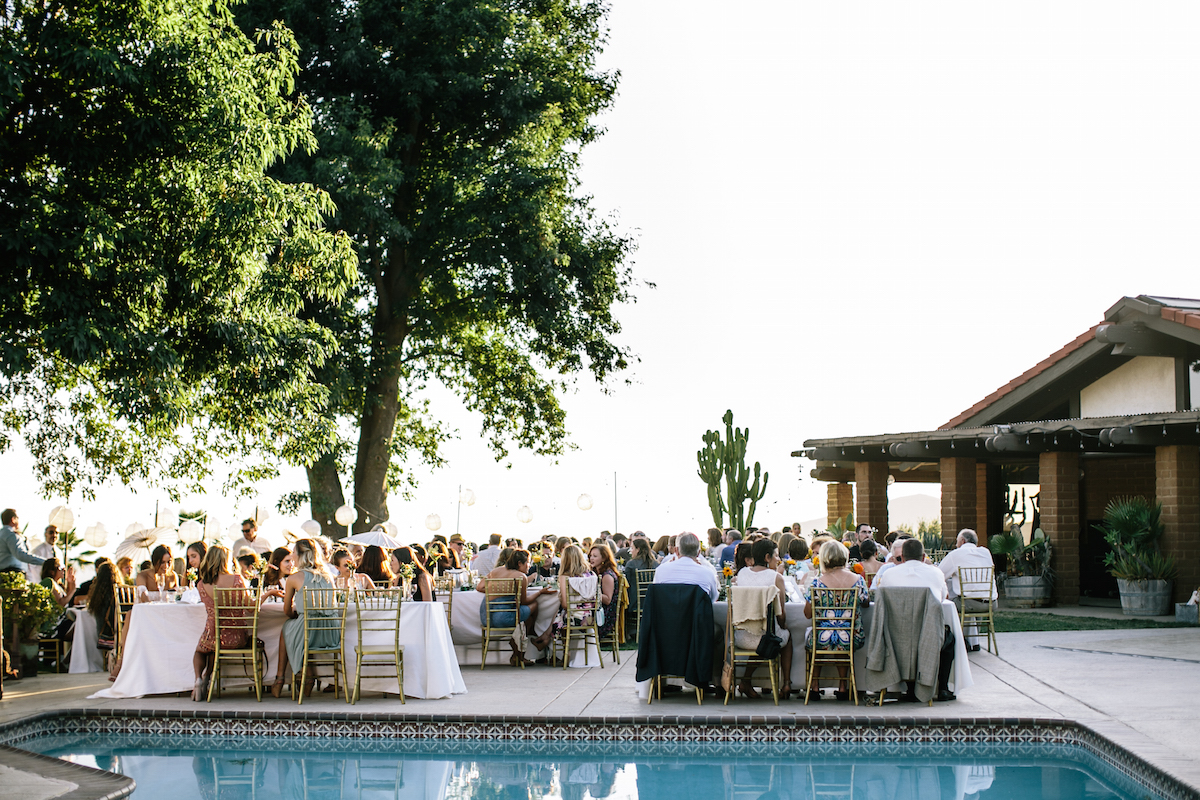 As for Molly…she says that she wouldn’t change a thing about that perfect day in the sun and best of all, she gets to spend a lifetime married to her very best friend! 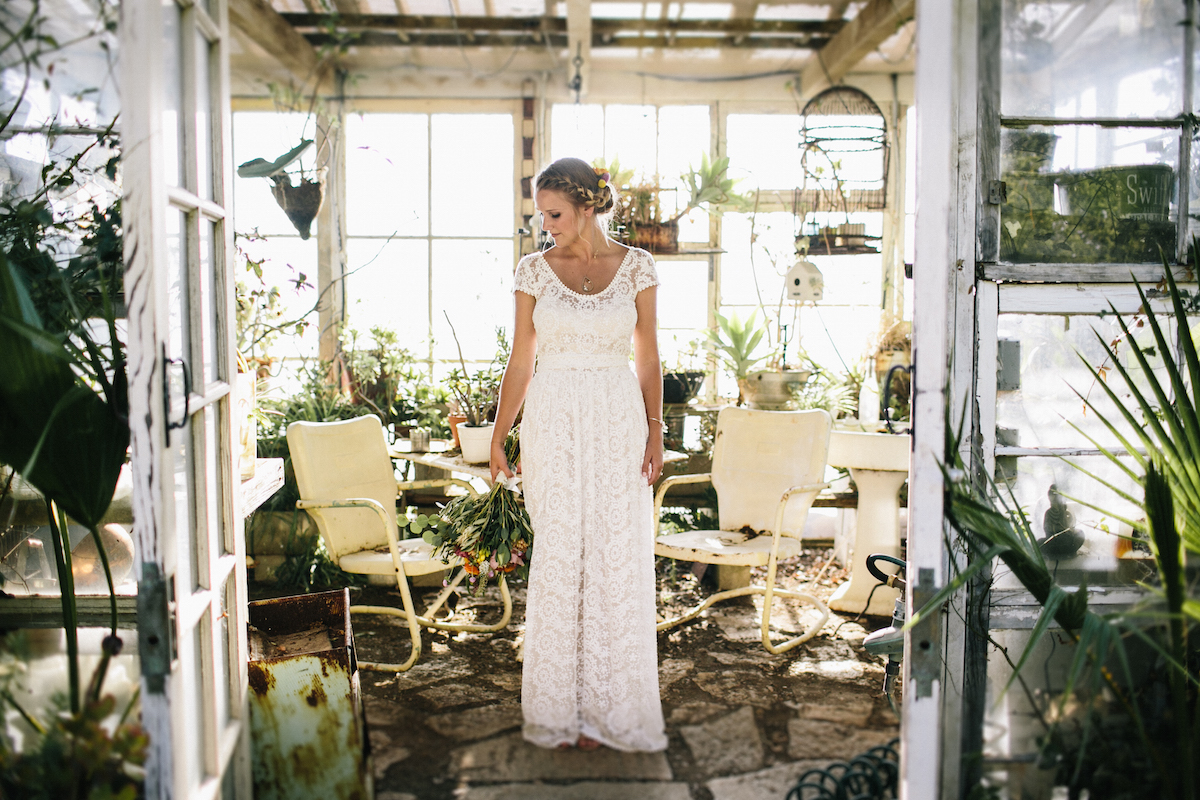 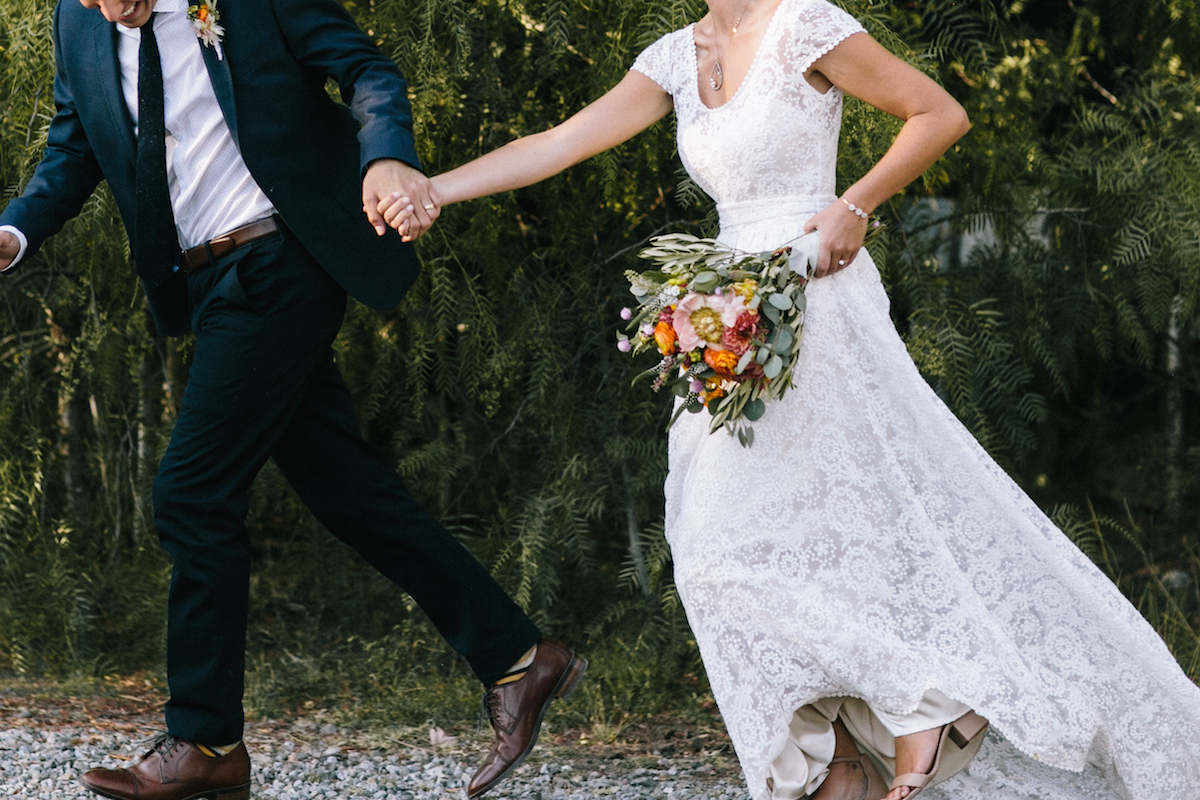