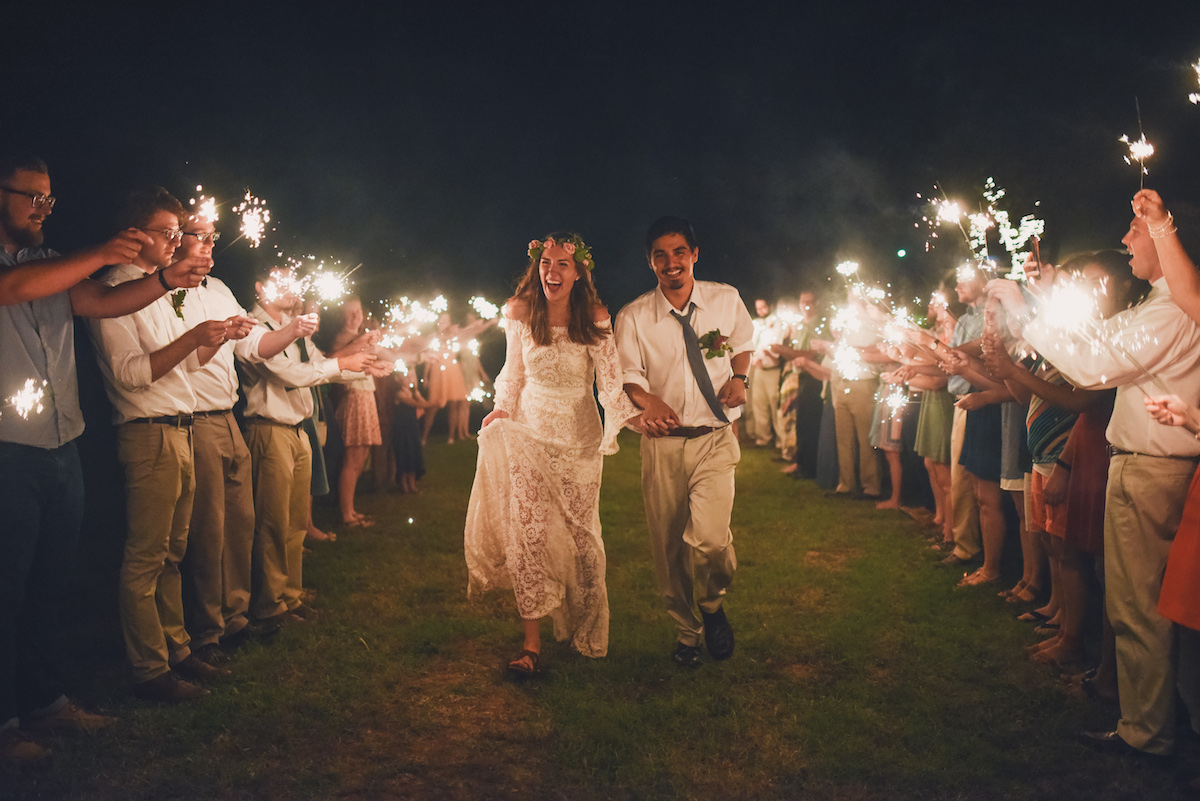 In college, when Sydnie was a freshman, Andrew was the super cute, popular sophomore that all the girls liked. She never even dreamed she would date him, much less end up marrying him. Yet it was only a matter of time before the two of them were close friends, close enough to visit Russia together. After a couple of years as friends, they started dating and now…now they look like one of the happiest married couples you ever saw. Indeed, looking through more than a hundred wedding photos of the couple I have yet to find one where it doesn’t seem like you can almost hear the out-loud-laughter. 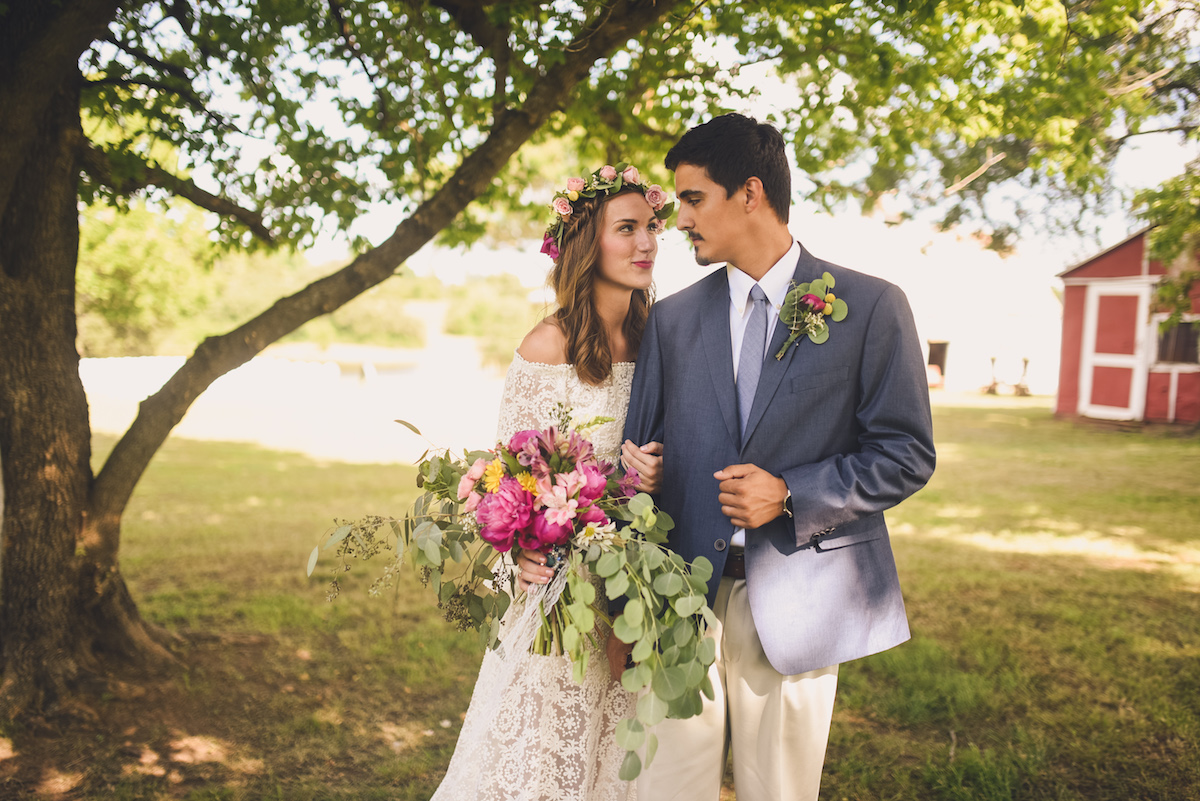 After they started dating, the couple had to make do long distance, they lived in completely different states: Sydnie in Oklahoma and Andrew in Los Angeles. On the evening of the proposal, Sydnie was out having dinner with some friends, completely unaware that Andrew was, in fact, driving down to Oklahoma to ask for her hand. After dinner, Sydnie and friends went walking in the park when she was surprised to see one of Andrew’s friends walking toward them, holding a photo of the couple. After that, Sydnie followed a path of pictures of the two of them throughout the years, which eventually led to a romantic letter. At the bottom of the letter were the words: ‘turn around.’ That’s exactly what Sydnie did, to find Andrew down on one knee. After the sheer surprise of seeing him right in front of her and quite a few exclamations of “you’re here!” Sydney finally said yes.

It doesn’t have a name yet. How about Sydnie?” Sydnie was super excited to be wearing a wedding dress that was named after her

The couple was engaged for ten months, more than enough time to plan a full-scale party for 200 people and, lucky for Sydnie, her mom was there to help and guide her every step of the way. As for the dress? Sydnie happened to see an article on Pinterest about why you MUST have pockets in your wedding dress…one of the featured dresses was, of course, from Dreamers & Lovers. She followed links through to the D&L website and simply loved every one of the designs. Whilst visiting Andrew in LA, she set up an appointment with D&L in Torrance and visited the shop with her mom in tow. She tried on a few of the bohemian wedding dresses but when Yanique pulled a dress from the new collection…Sydnie knew that it was the one. Even better, when her mom asked what the name of the dress was, Yanique replied: “It doesn’t have a name yet. How about Sydnie?” Sydnie was super excited to be wearing a wedding dress that was named after her. 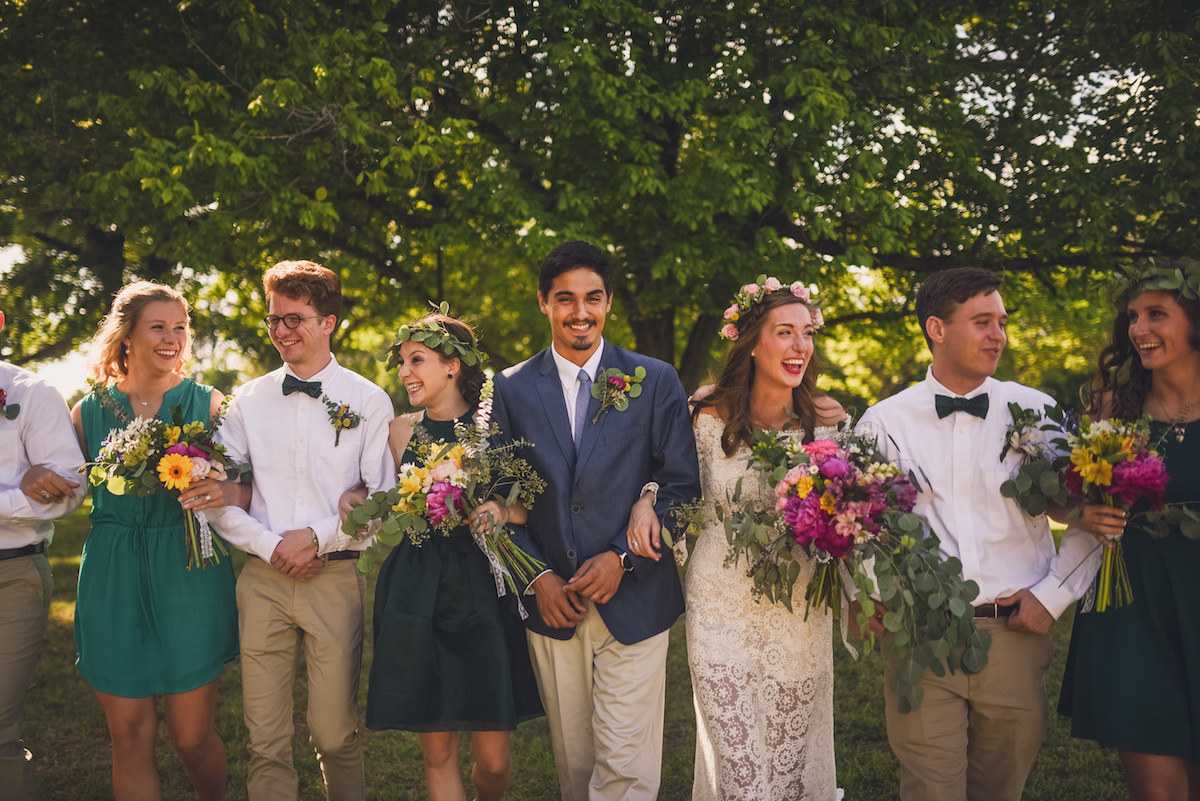 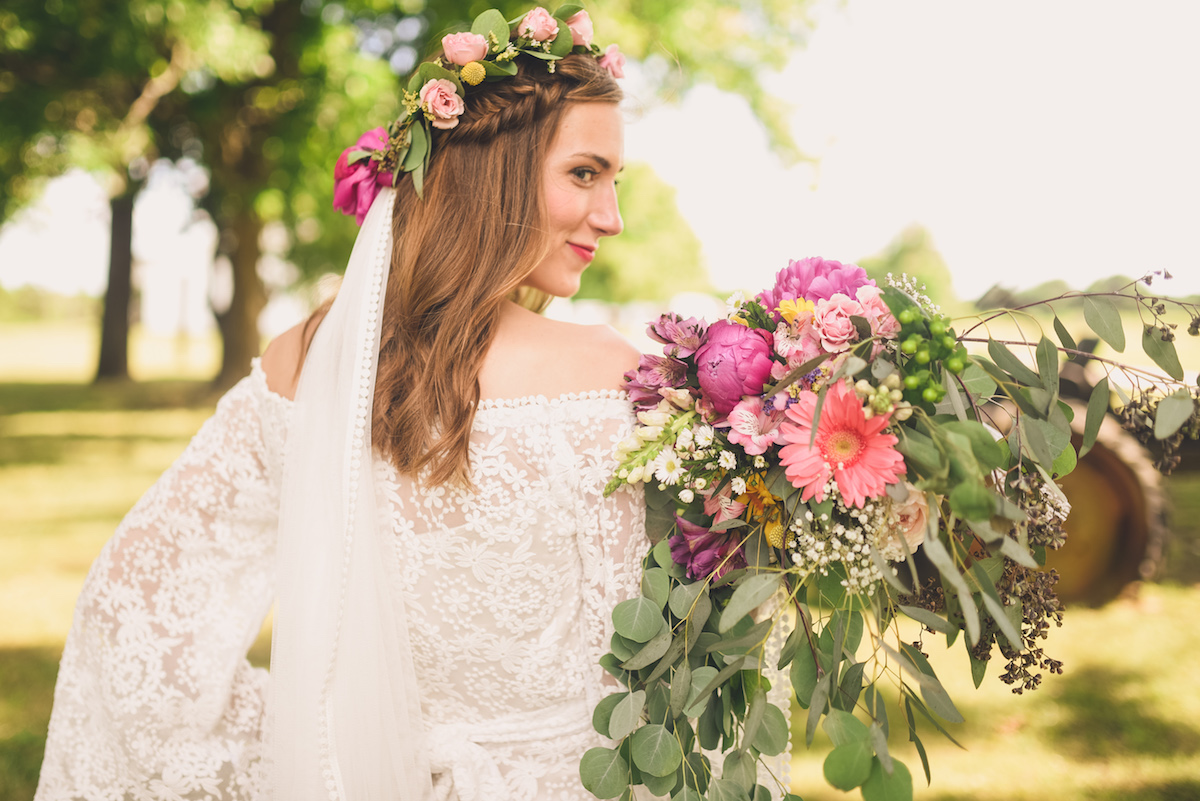 Sydnie’s mom is a serious lover of flowers and enlisted a wholesale florist company, fiftyflowers.com for supplies. She personally put together the bride and bridesmaids’ bouquets, the table arrangements and every boutonniere. Some of Sydnie’s friends arranged the bride’s, maids of honors’ and the flower girls’ flower crowns. The flowers were bright wildflowers, peonies, Billy balls, babies breath, Peruvian lilies, garden roses, spray roses and tons of fragrant eucalyptus.

I love you and will never stop pursuing you

The couple didn’t have readings but rather did communion together whilst in the background, their favorite artist, Josh Garrels, played the beautiful song: Heaven’s Knife. Vows were self-written, as they wanted the ceremony to be extra personal. A line that the couple loved so much that they still say it to each other every night before they go to bed was one that Andrew said right at the end of his vows: “I love you and will never stop pursuing you.”

They got married under a big and beautiful tree with an instrumental version of a Bon Iver song playing…the moment Sydnie walked down the aisle, the song picked up: it was one of Sydnie’s favorite details about the wedding. Everything came into focus in that moment and all Sydnie could focus on was Andrew, she cried all the way down the aisle.

Cake? Andrew is a bit of a freak for cheesecake and so a friend and college roommate of Sydnie’s made them a delicious cheesecake with strawberry topping. They also served cupcakes, cookies, chocolates and pies. 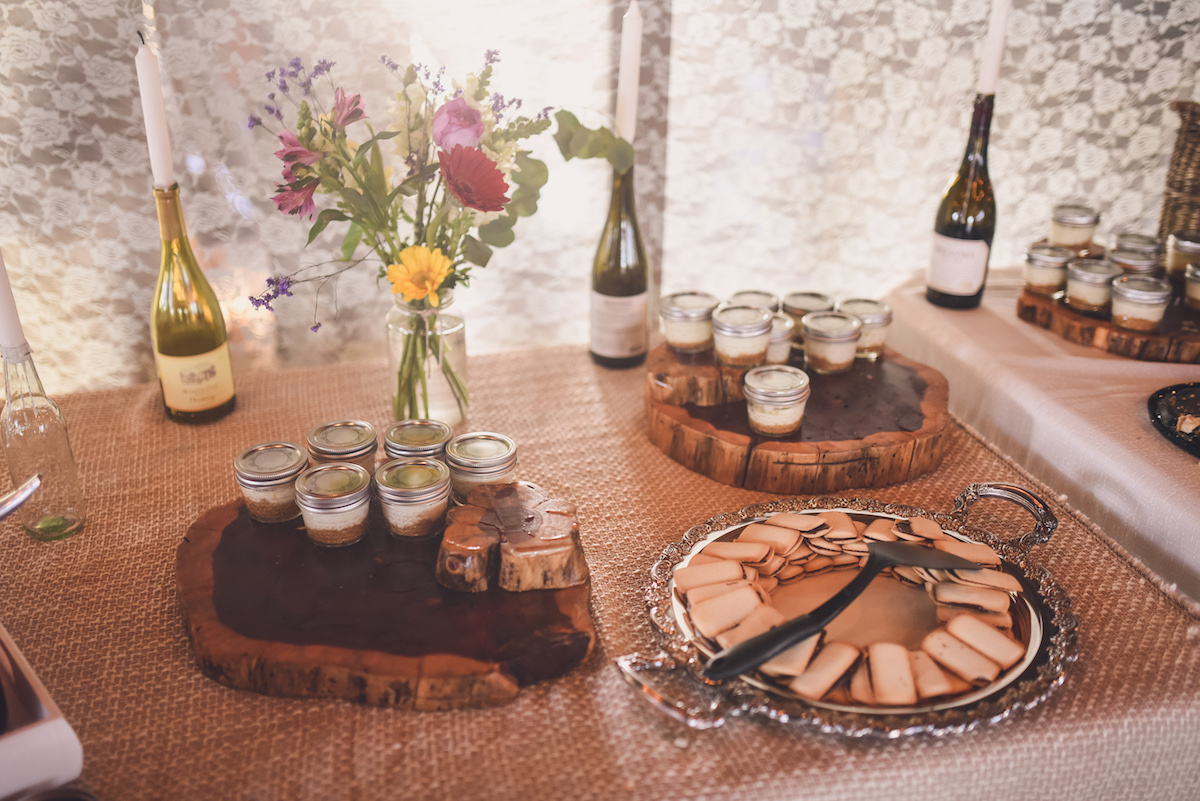 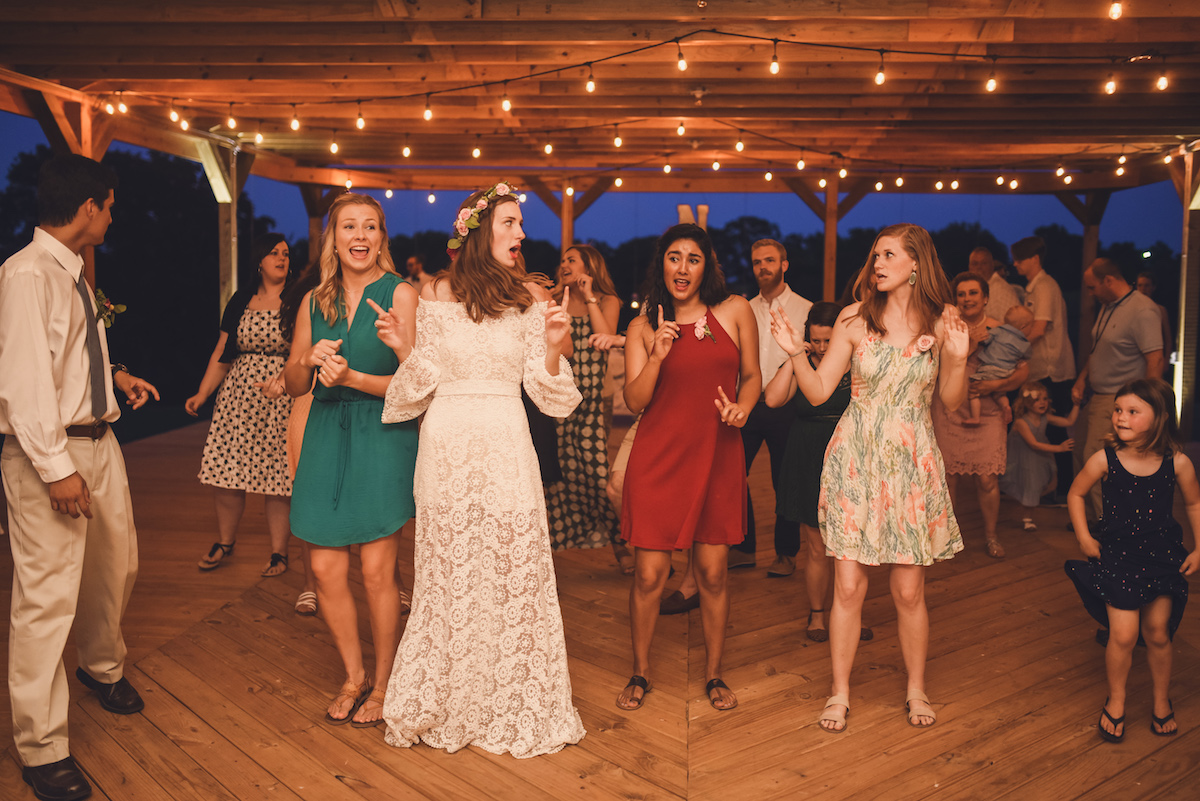 At the end of the night, they rounded off celebrations with a 5-minute fireworks display and whilst the couple ran off to begin their lives together, every guest lit a sparkler of their own. For the couple, every aspect of the wedding was exactly as they’d hoped, even better actually… and it was the perfect start to their long and happy lives as a married couple.

Sydney offered some great advice to other laid-back-brides like her…don’t stress, remember that every one of those moments during planning: picking the most beautiful venue, finding the perfect dress, hiring a photographer, they are all special memories so enjoy them! As for the wedding, relax and make the most of what will be the most beautiful day of your life, as long as you make it how you want and don’t stress!

The blissful pair now lives in LA together and will soon be attending graduate school. Andrew will be getting his masters in Linguistics and Biblical Languages and Sydnie, in Intercultural Studies. We know they’re just meant for each other and we wish this beautiful boho couple all the adventure they need and all the love they can bare! 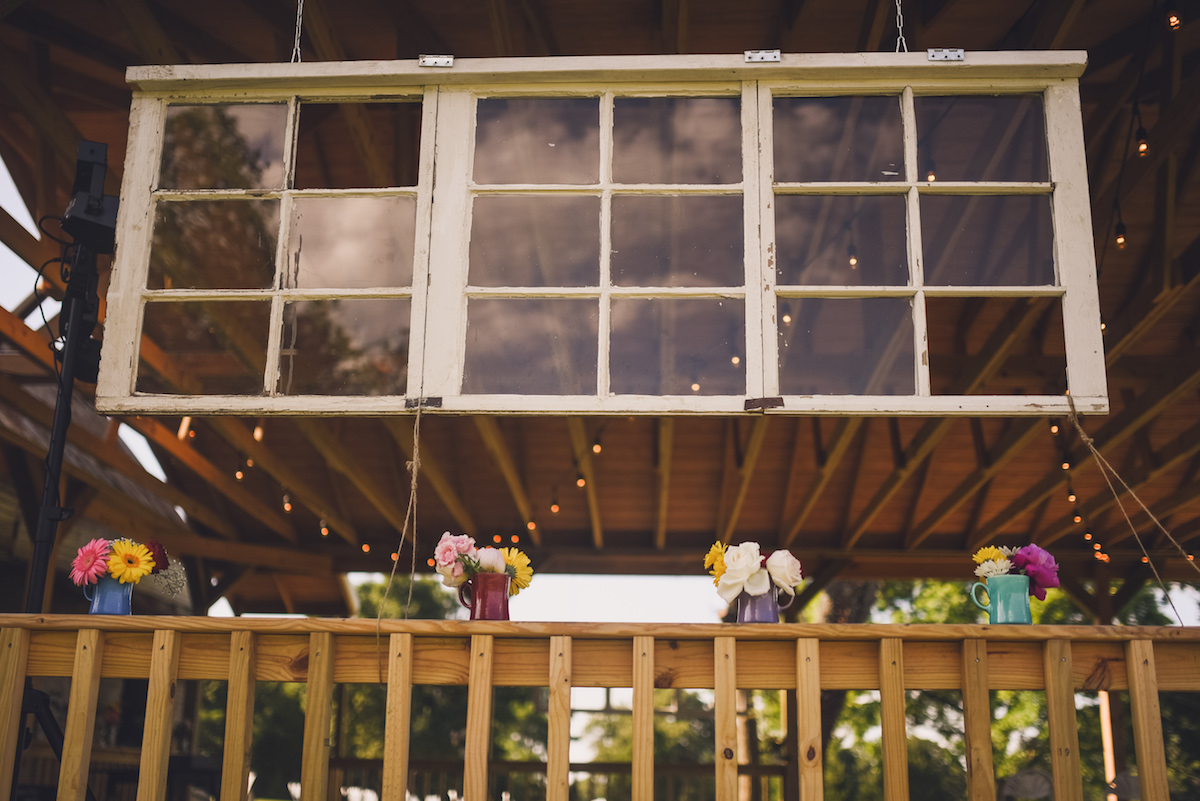 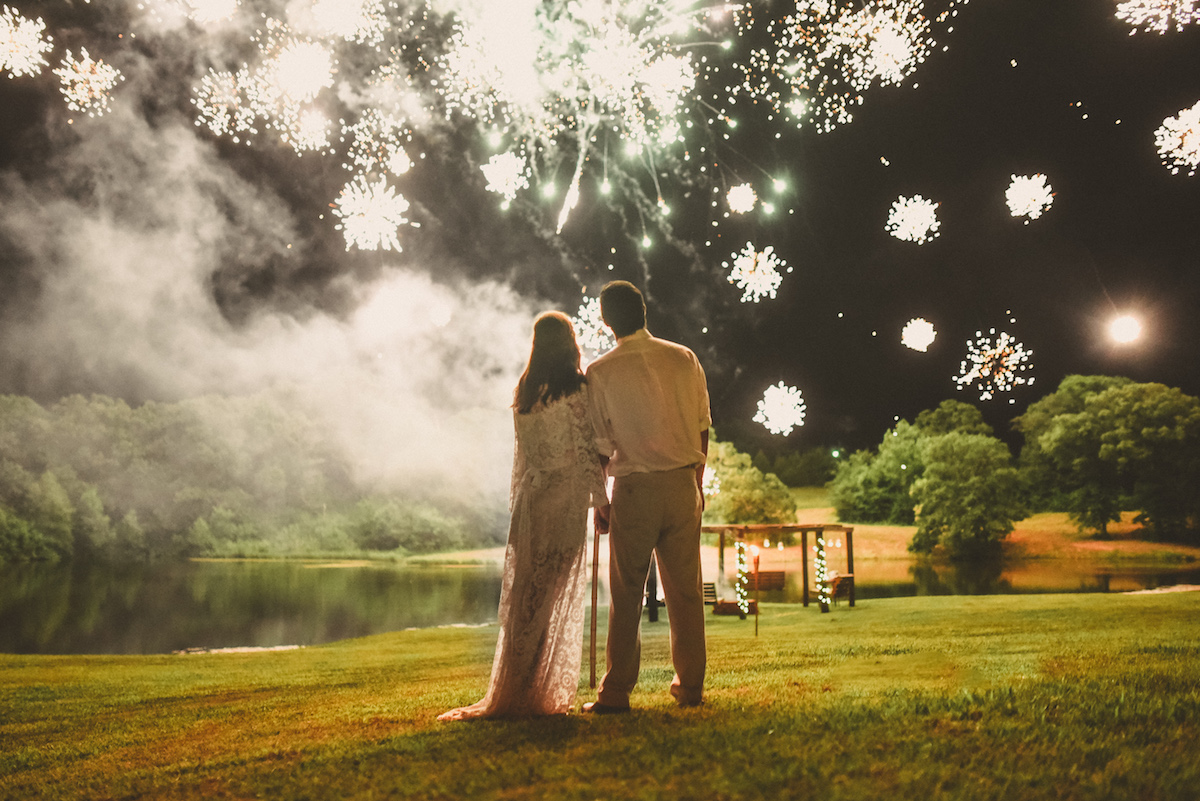 The Sydnie dress, bride Sydnie is wearing cane found here along with the other boho wedding dresses in the Dreamers & Lovers collection.