This laid-back southern girl with a love for all things boho marries her love in a chilled out Palm Springs wedding. She was one of the most ‘anti-wedding dress’ bride we had the pleasure of meeting. She wanted no frills, no fluff, and nothing too ‘wedding-y’…She first tried on the Annabel caftan and was hooked, and then she tried on the Agnes and fell in love. She felt the Agnes Simple Lace Wedding Dress was more appropriate for her ceremony, but knew that the Caftan had her name and heart on it, so she wore that to her reception. She added custom elements to her Amber gown, as she wanted to make it more ‘Jennie” and naturally more bohemian…the long fitted sleeves were just the perfect pairing on her dress. Just stunning!! 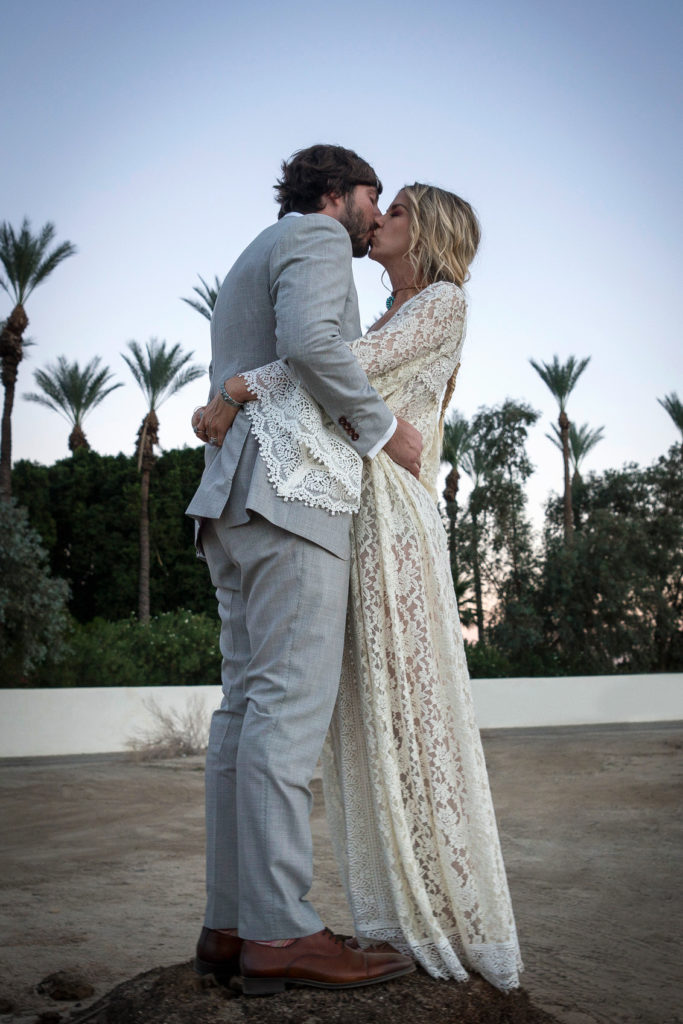 Jennie’s a Southern girl…with a blues and rock and roll soul (especially if the music’s live and something she can dance to). She moved to Hermosa Beach from Louisiana in 2007 and chilling at Boogaloo bar, she felt she’d found a little bit of that Southern style. Of course, the rather attractive barman didn’t hurt either and Jennie soon became something of a regular

Jennie’s a Southern girl…with a blues and rock and roll soul (especially if the music’s live and something she can dance to). She moved to Hermosa Beach from Louisiana in 2007 and chilling at Boogaloo bar, she felt she’d found a little bit of that Southern style. Of course, the rather attractive barman didn’t hurt either and Jennie soon became something of a regular. Needless to say, the two of them were friendly, even though they both had to pretend not to be into each other for the next two years or so. At long last though, they started dating and the rest, as they say, is history.

Aaron and Jennie were born two weeks apart, in the same year, so they are both Aries. With a handful of friends in tow, they made their way to Las Vegas to celebrate their 30th birthday in style…Jennie flew in from Dallas, where she had been working, while the rest of the crew popped in from LA. The first thing that seemed to be a little out of the ordinary was the fact that, on arrival at the hotel, the crew was nowhere to be seen: only Aaron was there, he’d decided they should have a private birthday dinner together before the party got started in earnest.

Jennie really started to wonder when she was taken up to the Eiffel Tower Restuarant and offered the best seat in the house…sure enough, midnight came and there was Aaron, down on on knee, proposing. 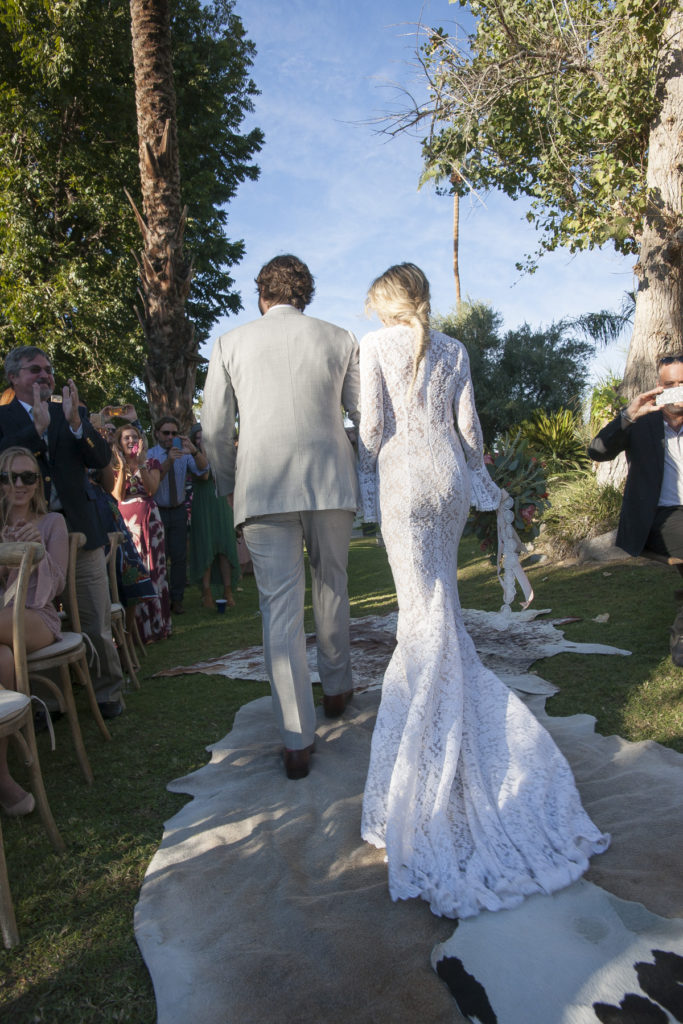 Anyone who knows the couple will know that the whole set up was pretty out of the ordinary for them: but that’s what’s so great, the uniqueness of it made it even more unforgettable. On top of that, they got to spend the rest of the weekend celebrating Las Vegas style with all of their best friends.

In spite of their two and a half year engagement, planning started for Jennie almost immediately…through the first year she used Pinterest to source photos of the sort of dress she hoped to find, she spend many a night obsessing over the Annabel gown but had no idea that Dreamers and Lovers (and Annabel) was right around the corner from where she lived. When she finally found out, she was overjoyed and what’s more…she ended up buying not one but two gorgeous, laid-back Dreamers and Lovers boho wedding dresses (I suppose she just couldn’t make up her mind!) 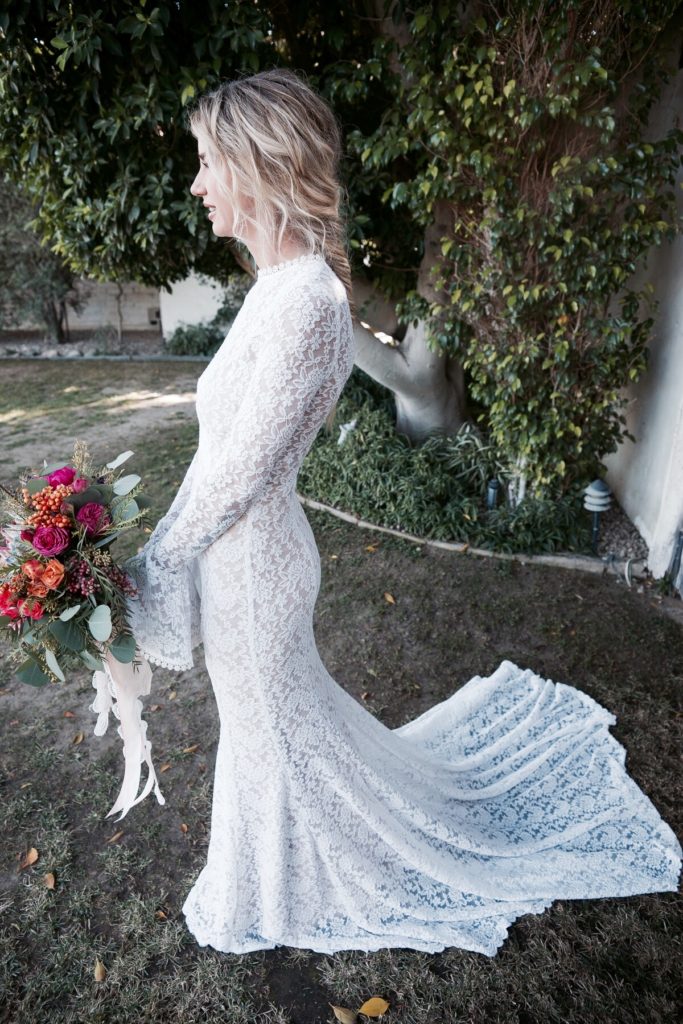 Jennie is super happy that they waited and gave themselves a chance to really enjoy their engagement, without planning stress and time constraints: after all, you only get to be a fiance once in your life so you should savor it. Because they gave themselves ample time they ended up with every venue and vendor that they had hoped for, plus no hectic last minute rush. Jennie knows that stressing during engagement time is not worth the negativity it can introduce to your relationship. 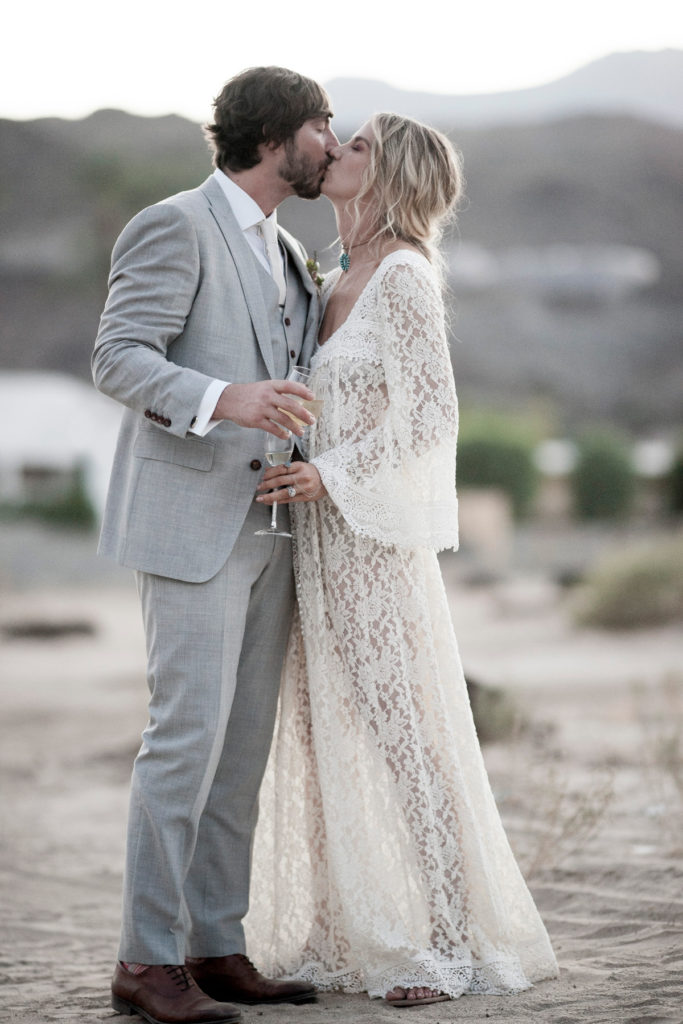 So, the couple invited 130 guests and 99 of their nearest and dearest ended up attending…but the number was just perfect. Aaron and Jennie paid for everything, so finances were a little tricky to manage during planning, although in the end everything worked out just right and was exactly the way they’d hoped it would be. They created an incredible atmosphere, surrounded by greenery in Palm Springs at a lush estate. The atmosphere was probably Jennie’s favorite thing about the wedding!

The couple had one of their best friends act as officiant, because they aren’t religious he opted to tell funny stories about the two of them instead of doing readings: he’s known them for the full 8 years they’ve been together. The couple also wrote their own vows, which ended up being overwhelmingly emotional for Jennie (I love this story). Aaron’s vows described the first time they saw each other and he literally compared it to love at first sight…this was the coolest and sweetest thing for Jennie, who’d spent two years thinking that he just saw her as a friend, more or less! She’d had no idea he felt that way from the get go!

Another favorite was the photobus (from sdphotobus.com), it’s a refurbished VW bus that doubles as a photo-booth, so they have unique and hilarious memories to add to their photo collection. They also had all the palm trees lit up in different colors, which created an absolutely awesome vibe.
Jennie loves nothing more than succulents (except Aaron, obviously) and so her flowers were bright, colorful and succulent heavy. Apparently her bouquet actually weighed more than she does but nonetheless she was 100% happy and her florist absolutely killed it!

Not really ones for tradition, the couple opted for an ice cream sandwich cart instead of the usual wedding cake. The flavors were out of this world and the addition of home made cookies made the idea a huge hit with both the guests and the couple. 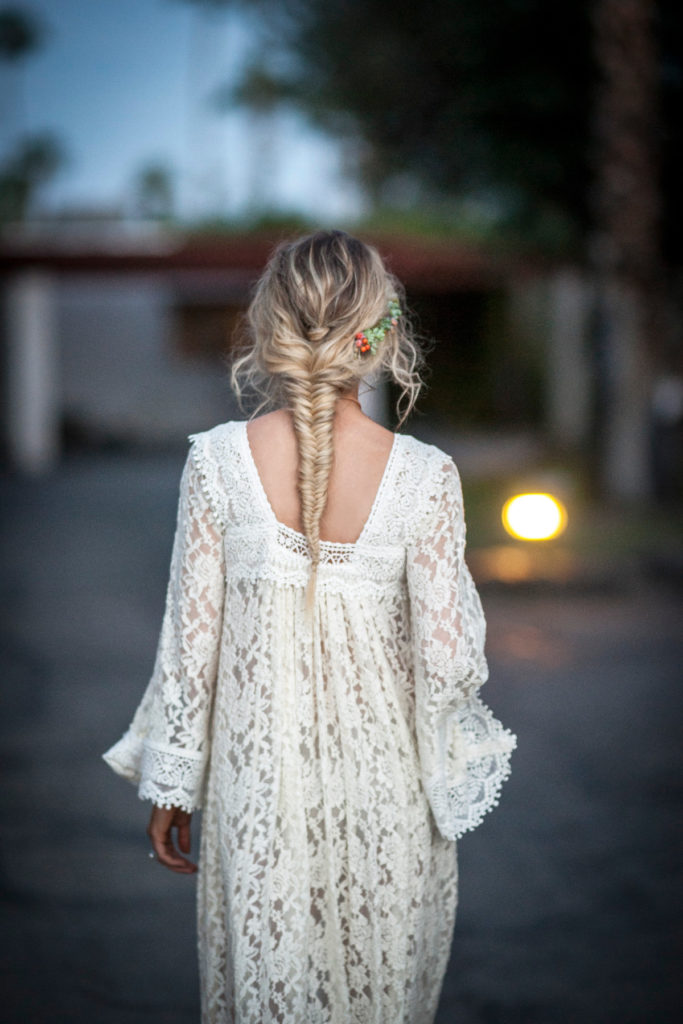 The reception really went off with a bang when the entire party jumped into the swimming pool!

What does the future hold for this shining couple? Right now they’re just savoring their journey as newlyweds…with no plans for children at the moment, they know that it will happen if and when it happens. They love to travel, still dig their live music and don’t plan to stop loving life anytime soon. We wish them all the best of a lifetime filled with laughter…

To see other brides wearing the Agnes, take a look at this wedding