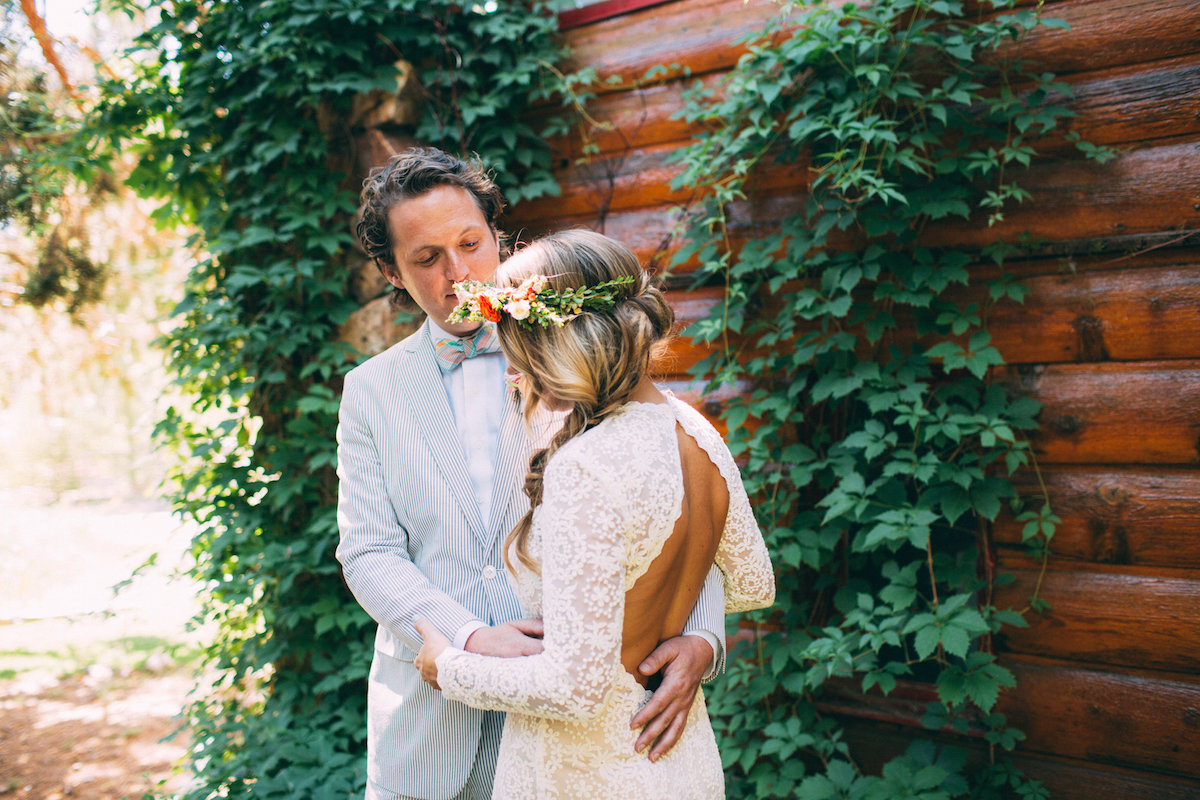 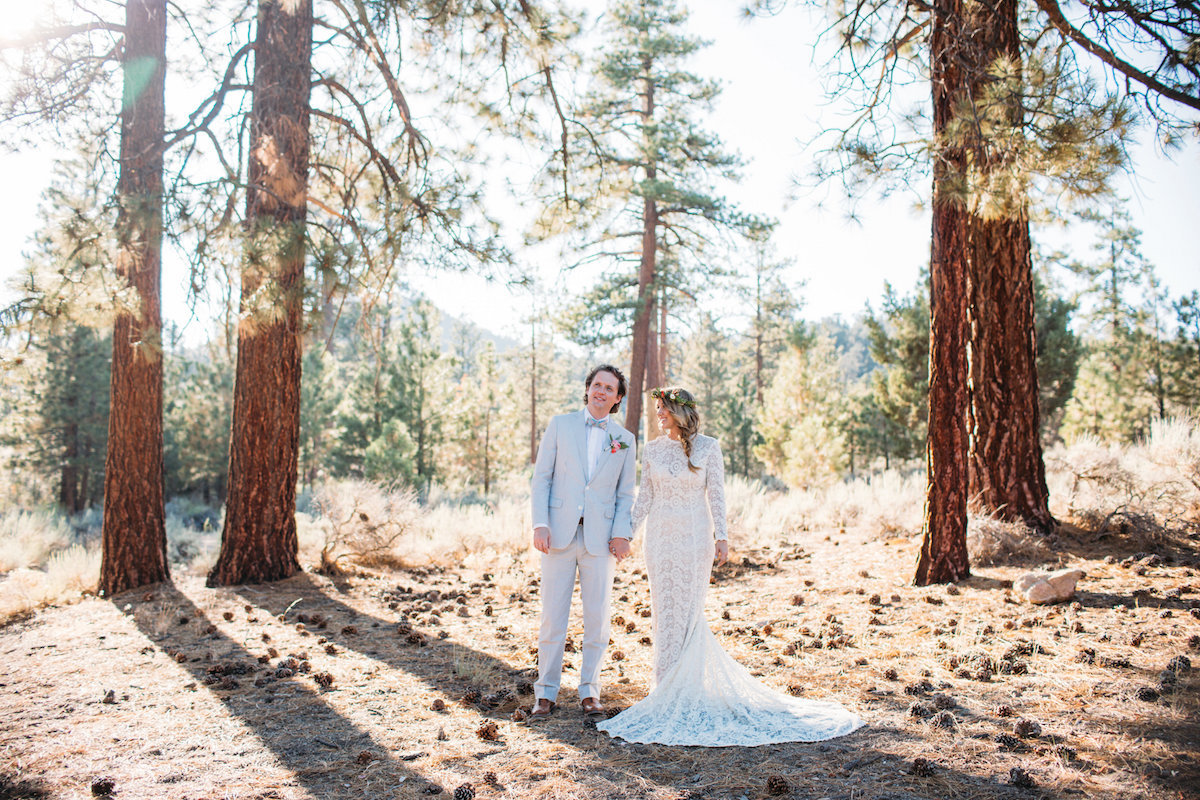 While attending graduate school at Indiana University, Amy did a summer internship in San Francisco. Being a Midwest girl, she decided she’d use her weekends to explore the West Coast and so she set off on a few solo trips to Vancouver, San Diego and LA. Amy used Facebook to reconnect with some old acquaintances from Chicago and together they enjoyed a sun-filled day on Venice beach, after which they discovered (to Amy’s dismay) that her rental car had been towed and ticketed. Instead of letting the frustration overcome her, Amy allowed her Facebook friends to take her out for a night on the town at Hollywood’s rock n’ roll bar, Angels and Kings.

There, amongst the huddle of leather, black and denim clad rockers, stood the proverbial sore thumb: there was something strangely irresistible about Nick’s blazer and skinny tie, his charmingly clean cut appearance…call it nerd appeal, Amy was into it. After a (possibly strategic) walk-by, Amy was greeted with a cool “hello”, followed by a welcome chat, an offered drink and, you guessed it, an impromptu make-out session (and if we think these never amount to anything…we’ll have to think again).

The sparks must have been flying because, at the end of her Master’s program, Amy made the move to LA to be with him

Thinking that that was the last she’d see of ‘sexy-nerd-boy’, Amy was pleasantly surprised by the way he pursued her afterward, even though he was aware that she lived all the way in Indiana. He was not to be that easily dissuaded and the pair was soon involved in a long distance relationship. The sparks must have been flying because, at the end of her Master’s program, Amy made the move to LA to be with him. As she puts it, it just felt right. 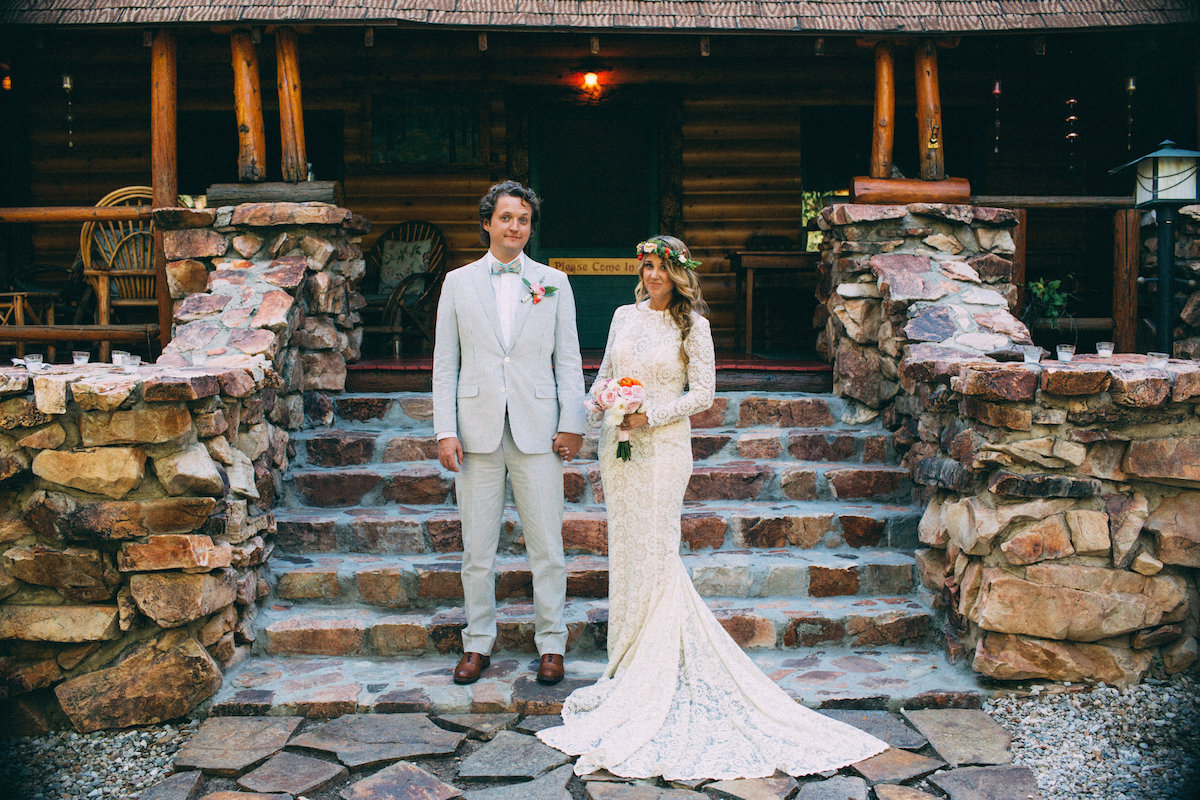 On a weekend trip to Yosemite National Park, Nick managed to find a deserted meadow hike with gorgeous views of Half Dome and that is where he popped the question. Lack of cell service in the park meant that the new engagement would be their little secret until they emerged from the wilderness the next day.

When it comes to the all important mission of choosing a wedding dress, Amy is of the belief that there are two types of bride…those who chose a dress that they never in a million years would have imagined themselves choosing and those who know from the get-go just exactly what it is they’re looking for. She considers herself to be one of the latter. Amy knew that she wanted to be covered up, while still showing her gorgeous curves. She knows that a woman needn’t show a whole lot of skin in order to look like a million bucks.

After finding Dreamers and Lovers online, she decided to visit the studio in Torrance, where she found two long sleeved dresses which really caught her eye. After chatting with founder and designer, Yanique, Amy realized that she could customize the breathtaking Alice gown to have long sleeves also, so that’s exactly what she did. The end product was a true reflection of Amy’s personality and fashion sense; it was everything she’d hoped for and most definitely what she had pictured herself in in dreams. Amy was delighted and she looked absolutely unforgettable in her boho-chic, Alice gown. 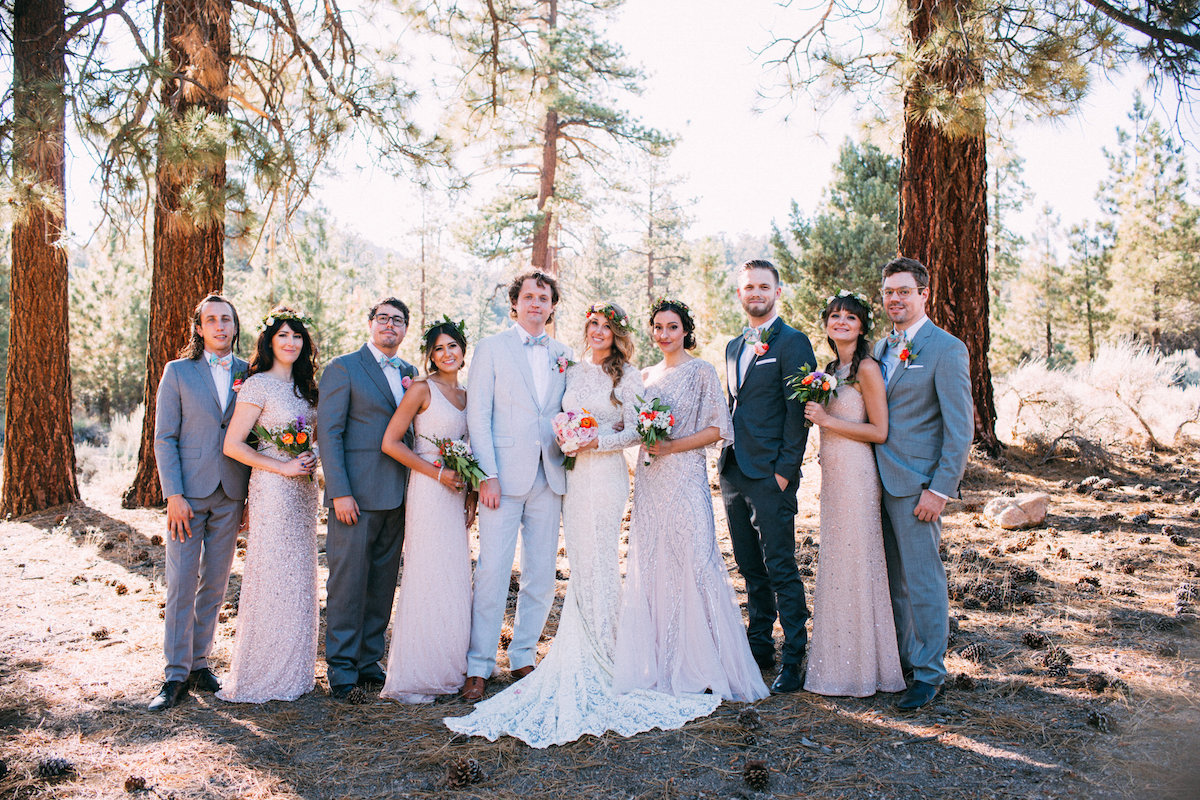 The wedding was to be a small and intimate one, with only the closest of friends and family running the wedding and attending it. The couple’s friend, Scott, officiated; their friend John played the guitar for the aisle music and Amy’s childhood friend, Lindsey, did the reading. Everyone later remarked about how beautifully intimate the ceremony was, plus the couple had a chance to talk to every single person who attended.

Love itself is what is left over when being in love has burned away, and this is both an art and a fortunate accident.

The reading was an excerpt from Captain Corelli’s Mandolin by Louis De Bernieres and it goes: “Love is a temporary madness, it erupts like volcanoes and then subsides. And when it subsides you have to make a decision. You have to work out whether your roots have so entwined together that it is inconceivable that you should ever part. Because this is what love is. Love is not breathlessness, it is not excitement, and it is not the promulgation of eternal passion. That is just being “in love” which any fool can do. Love itself is what is left over when being in love has burned away, and this is both an art and a fortunate accident. Those that truly love, have roots that grow towards each other underground, and when all the pretty blossom have fallen from their branches, they find that they are one tree and not two.” 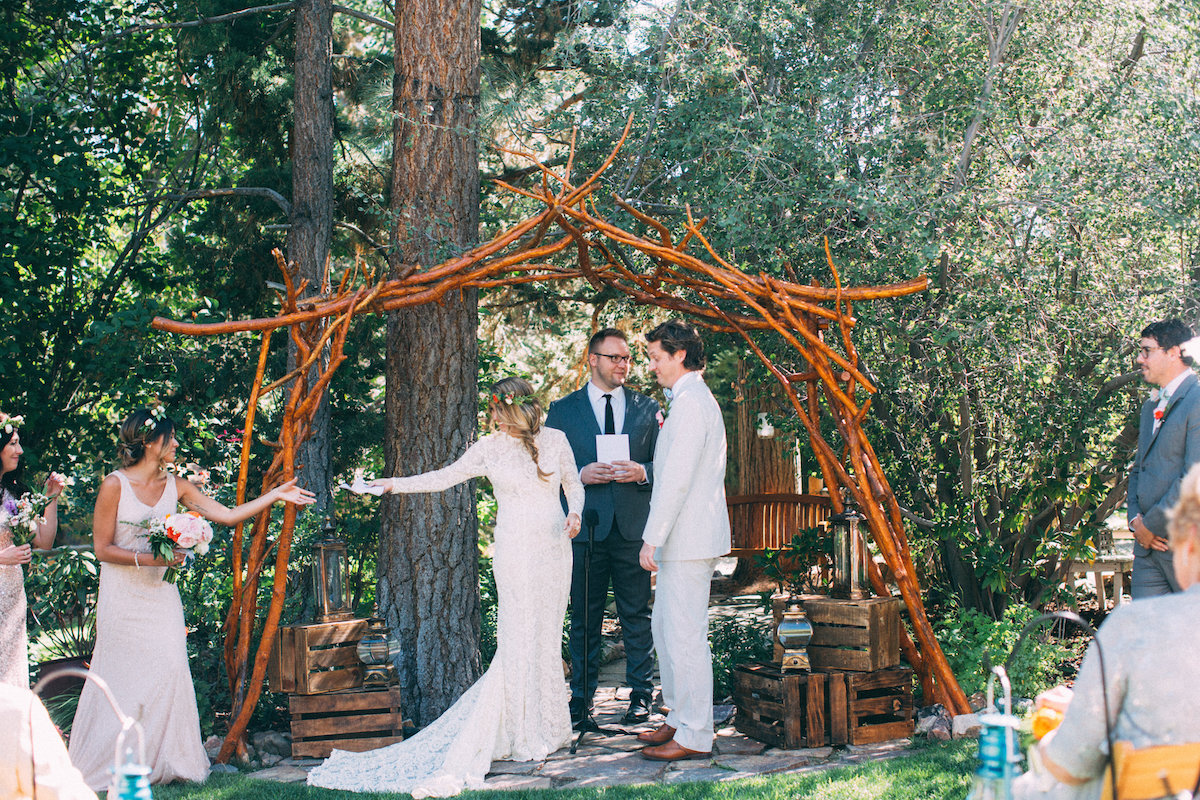 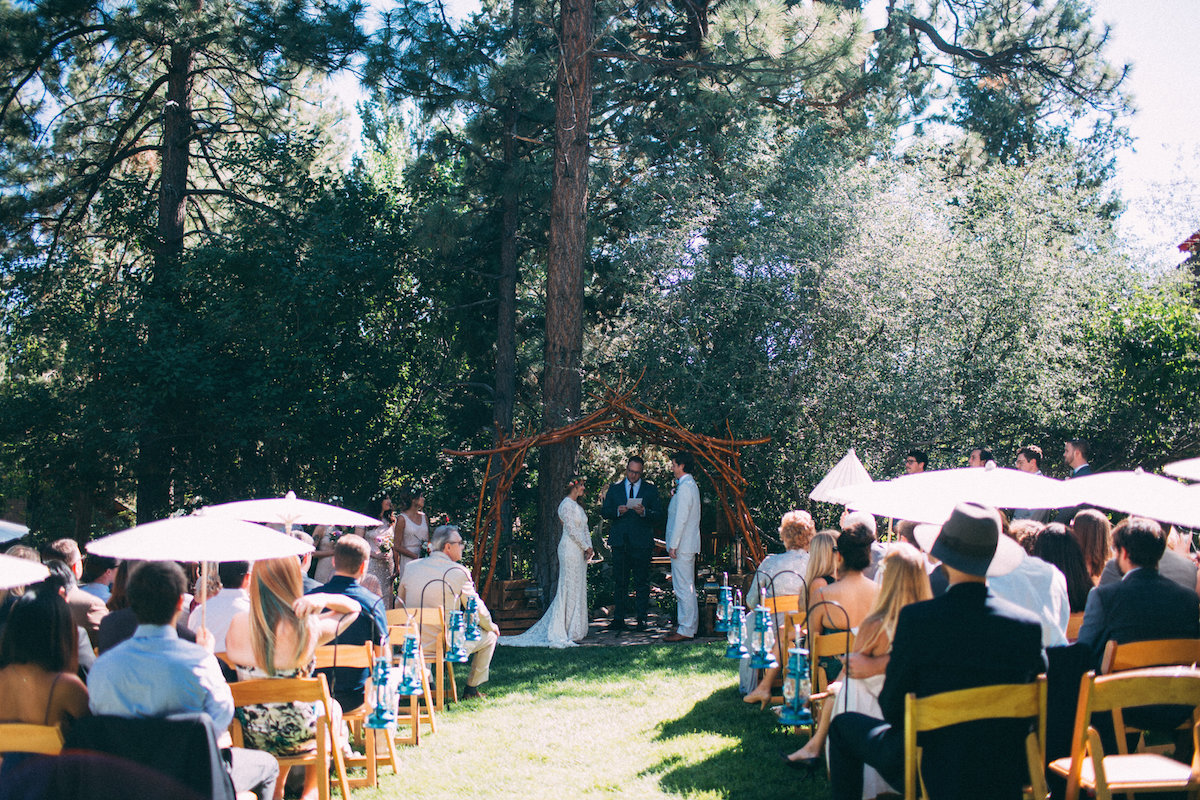 Amy and the bridesmaids saw to all the flowers for the event. Her and her friend Lyn actually took a floral design class and became obsessed with using flowers from the downtown LA flower market. They made centerpieces, bouquets, flower crowns, boutonnieres and corsages. It was a rustically elegant, bohemian wildflower business with loads of green, orange pink and white; garden roses, ranunculus, dahlias and chrysanthemums. The outcome was something Amy and Lyn had every right to be proud of!

So much of what was done in preparation was DIY, Amy knows now that you don’t need to fork out millions to arrange the best day of your life. Your friends will be happy if you ask for their help in planning and, as a result, the wedding will turn out even more intimate and full of love-magic than you expected. Amy will now be more than happy to get hands on next time a friend or family member gets hitched. 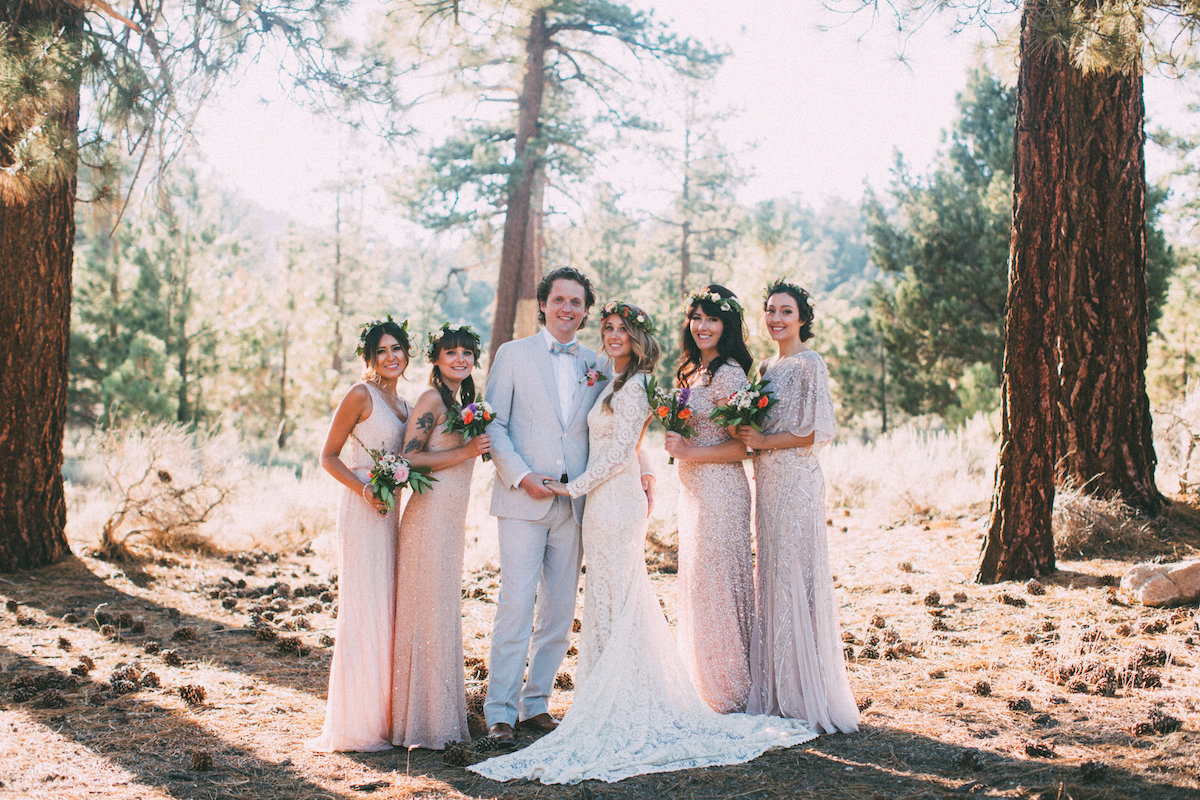 One of the biggest challenges for Amy was overcoming stress while planning, so many small details and everybody firing questions at you…Amy felt her brain was full and just about ready to explode at times. She says it’s important to remember to relax, breathe and enjoy. She also noted that it’s essential to make both sets of parents feel chilled and content because weddings can be a really stressful time for parents too.

To complement the laid-back vibe, dessert was to be assorted cupcakes instead of cake. They had red velvet, chocolate caramel and strawberry with filling, plus: because of the camping/glamping theme, there was also a s’mores table where guests could roast their marshmallows over a little fire.

As for vows, the couple both wrote their own and kept them as a surprise for the ceremony. What’s really remarkable is that both Amy and Nick ended up mentioning the same incident, which had happened a few months before the wedding. They had arranged a trip to Louisville, Kentucky so that their parents could meet, although Nick had just started a new job and work demanded that he take a separate flight. Nick, of course, overslept and missed his early morning flight. The moral of the story was that Nick desperately needed Amy to keep him in line (as he clearly couldn’t function without her) and Amy vowed never to let him miss another flight.

One thing that the couple did a little differently was that, before the wedding, they were allowed to see each other, take some photos and ease their nerves a little bit. The entire guest list ended up joining them for a drink on the porch before the wedding had even started, with Amy all dressed and already made up. Although some might consider this to be a bit of a wedding faux pas, Amy actually saw this as a highlight on her day and it gave her an opportunity to relax herself, spend time with friends and admire the man who was soon to be her husband

Another highlight for Amy was the fact that the guest lodge that was chosen for the venue allowed everyone complete run of the property, dancing, bar area, games area, lodge and porch. Everyone had the option to wander about the grounds and enjoy the scenery instead of spending all their time at the tables. 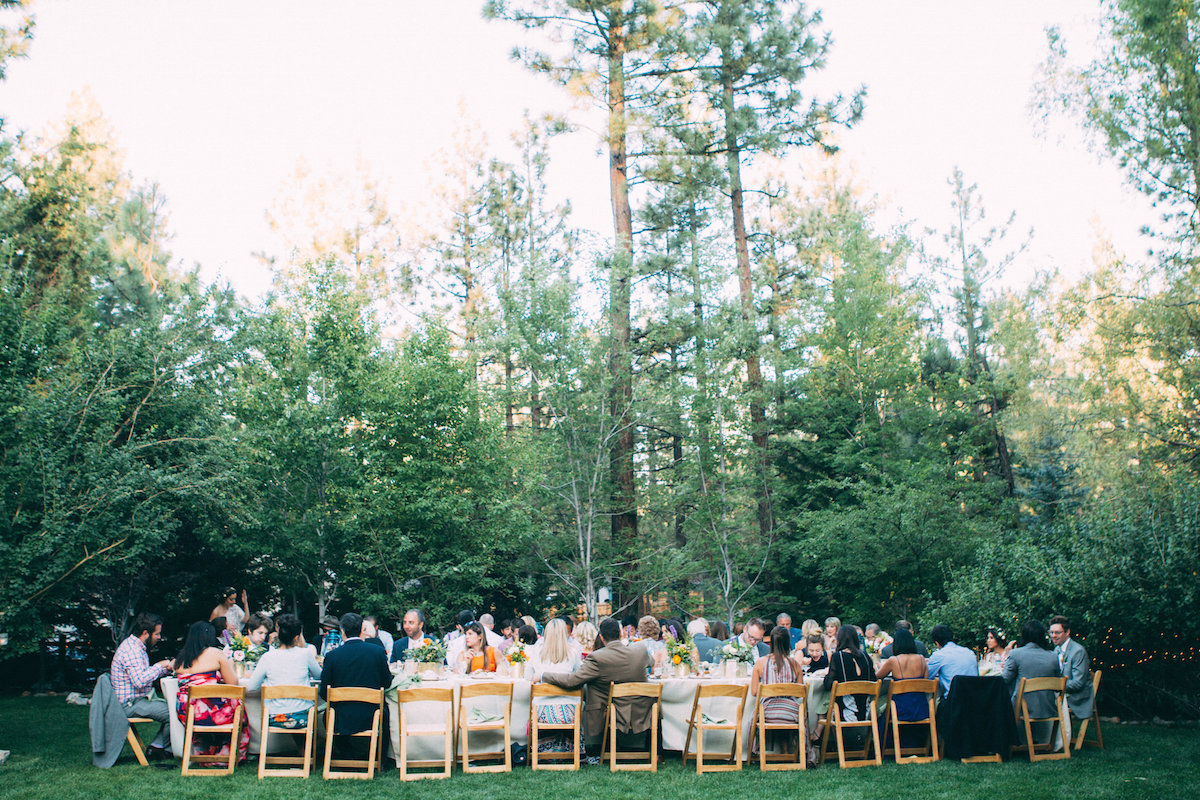 When asked what her advice was for future brides, Amy shared another funny story about her car, which broke down on route to the venue the day before the wedding, making her 2 hours late for the rehearsal. Stuck in bumper-to-bumper traffic, once again Amy decided to make the most of the situation (it was Friday after all). She ended up meeting her fiancé at a nearby restaurant and having beers with two members of the bridal party. They had an absolute blast and it’s an experience Amy will always remember with a smile. It just goes to show, don’t stress…just stay positive and things are bound to work in your favor.

The pair is saving now for a new house or apartment and plan to enjoy a belated honeymoon late in October. They’ll be visiting Atlanta, Savannah, Georgia and Charleston, South Carolina. Looking at their incredible wedding photos I found myself giggling, I can almost hear the quite jokes they share between them and I’m sure that for this beautiful Dreamers and Lovers couple, there will never be a dull moment or a moment filled with anything but dearest love. Blessings to you both and may your years be rich and joyful.