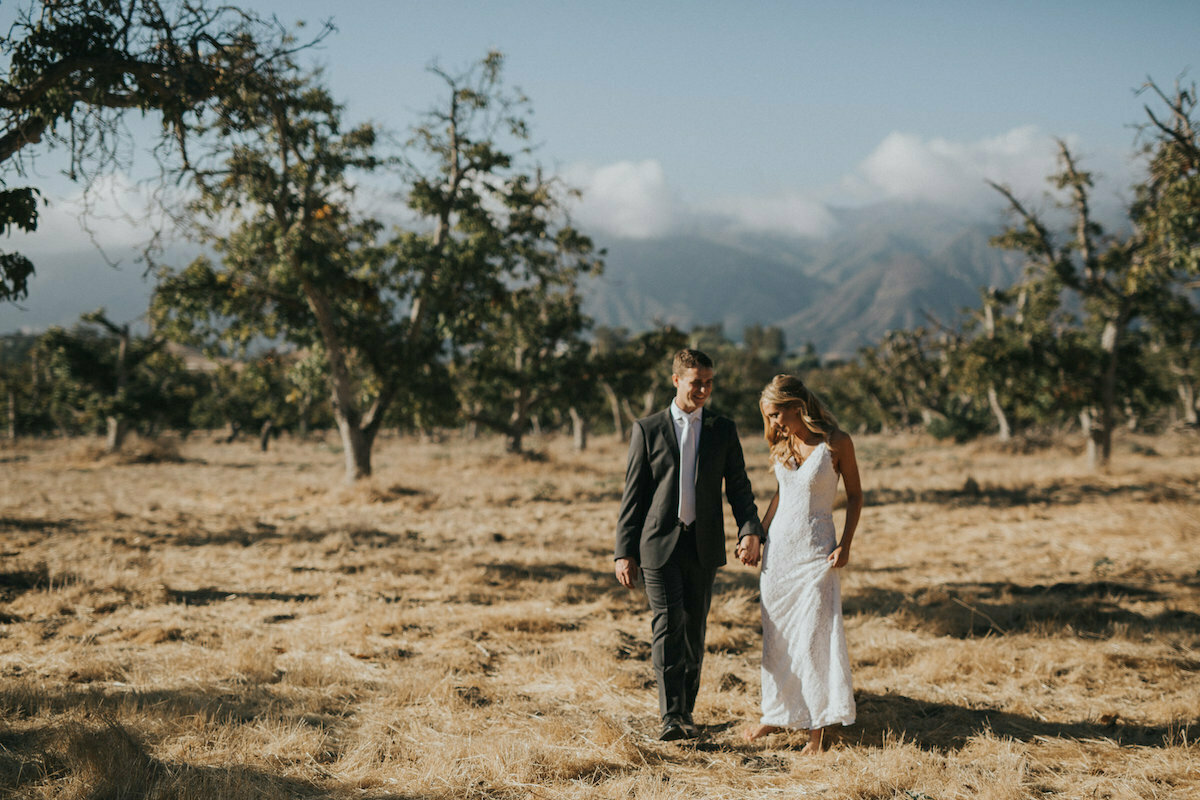 So you fancy that sexy colleague but you’re convinced it won’t end well? Think again…as Anna says, it’s worth it to date a co-worker when you’re planning on marrying him! You guessed it, this gorgeous couple met on the job. Now, although they worked in different locations they got the chance to chat on the phone regularly. Anna would call Mike to ask for help with a task and Mike would soon have her in stitches, laughing uncontrollably. They became friends until, two years later, they started dating and lucky for them, co-workers and management were super-supportive, to the extent that their CEO ended up being their officiant! 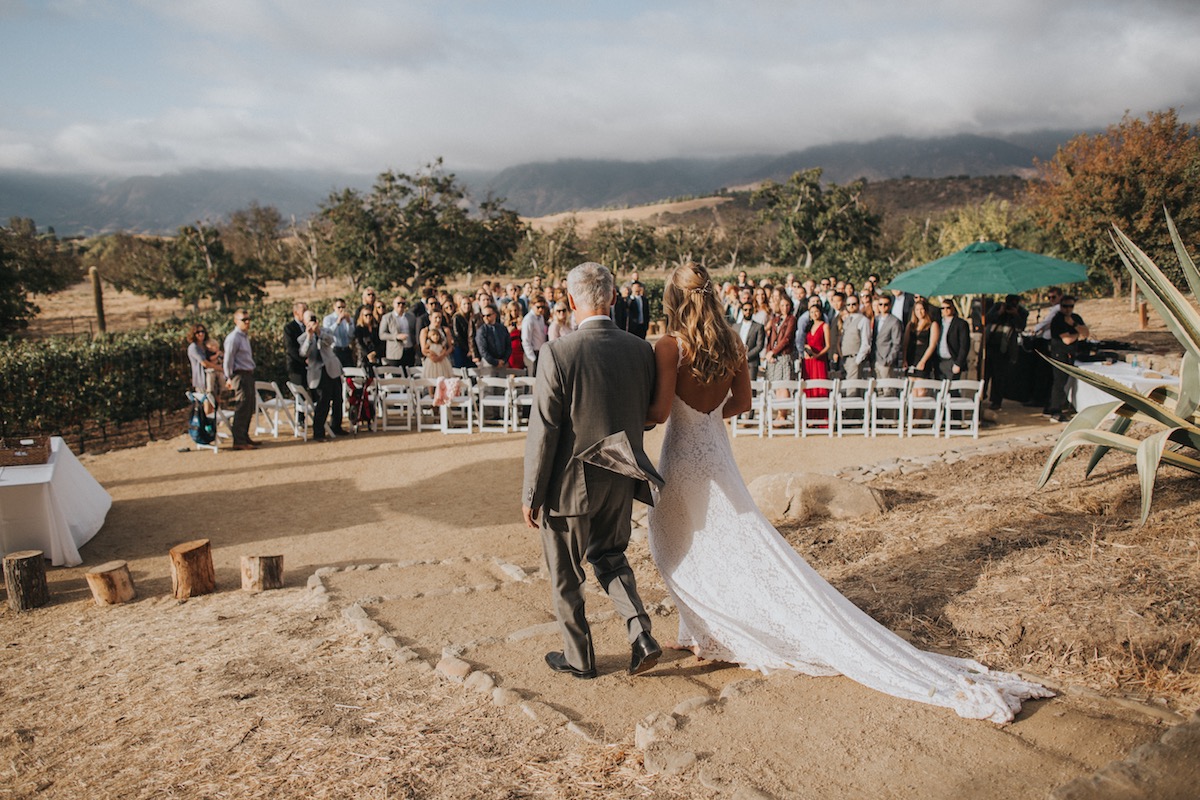 The proposal story is a classic: the couple was on holiday in Hawaii when, on the first night of their trip, Mike got down on bended knee to make the move. However, in his attempt to locate the ring in his obviously very complex jacket…he fell hopelessly short. That didn’t deter Mike, he simply removed then entire jacket and offered that to Anna instead. Needless to say, she refused to comply until he’d unearthed the elusive ring. The rest of the trip was spent with them both deliriously happy.

So, living in Santa Barbara, Anna visited a few Bridal outlets before deciding rather to schedule a big dress hunting expedition to LA with her mom and sister. They’d made appointments to visit four boutiques on their first day, with Dreamers and Lovers being third on their list. Anna had a vision in mind, lace, with a low back and a stunning train. In true boho spirit, Anna was un-phased about wearing a train at an outdoorsy ranch wedding and with good cause…her gown ended up fitting in just fine. When they reached their third appointment and she tried on the Amber dress, she knew she’d found the one. Amber ticked all the boxes and on top of that, it just felt so Anna. They quickly cancelled their fourth appointment and the rest is history!

Using their own mixing skills, the couple laid the track over a piano cover that they found on YouTube, resulting in a wedding-worthy and truly romantic number for their first dance

So, it was to be a medium sized, boho-ranch bash with 150 friends and family on the guest list. As they set about planning, they considered which song to use for their first dance, as this was an element of importance to them. Having spent a night at a big electronic music gig, shortly before they began dating, they’d fallen in love whilst dancing to one specific song. They wanted to use it for their first dance but let’s just say that the beats were a little on the intense side. They reached out to the producer, expecting nothing back, what with him being well known and traveling the globe doing gigs and all. To their pleasant surprise he responded by donating a sample of the vocal track. Using their own mixing skills, the couple laid the track over a piano cover that they found on YouTube, resulting in a wedding-worthy and truly romantic number for their first dance. A choreographer friend helped them to come up with the perfect moves to match their song. 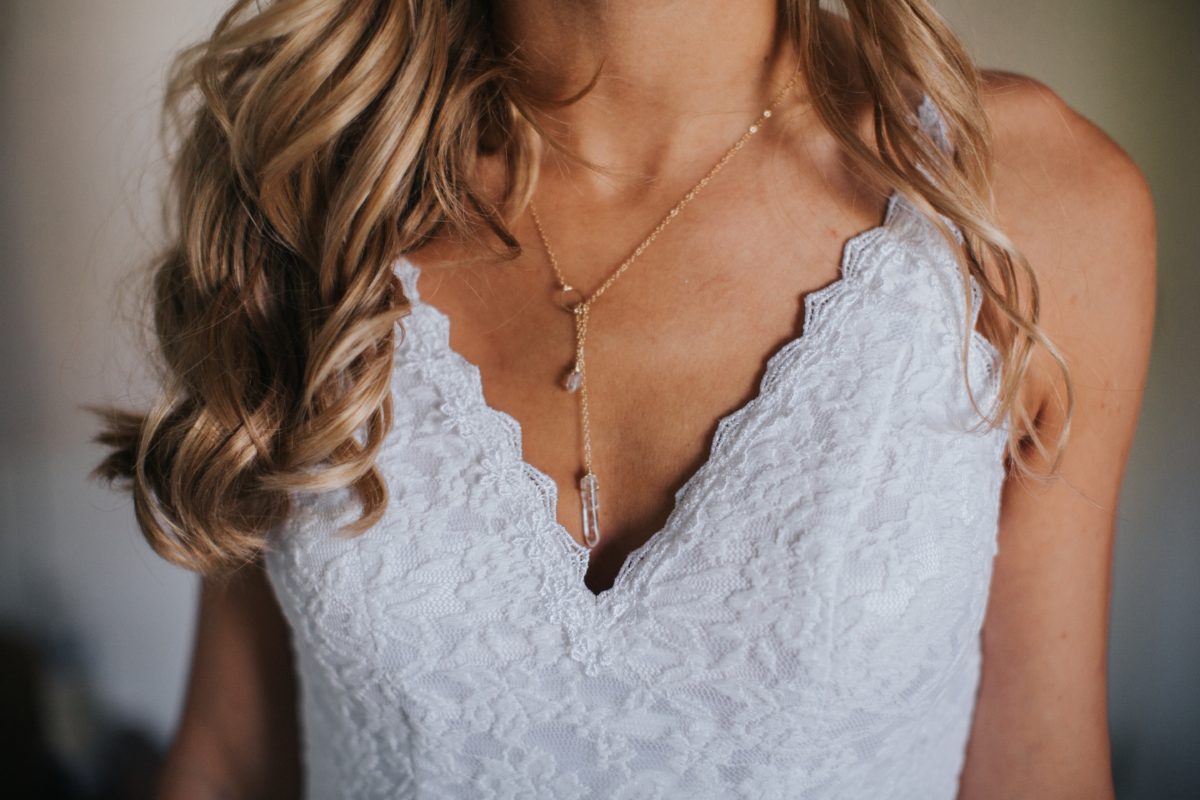 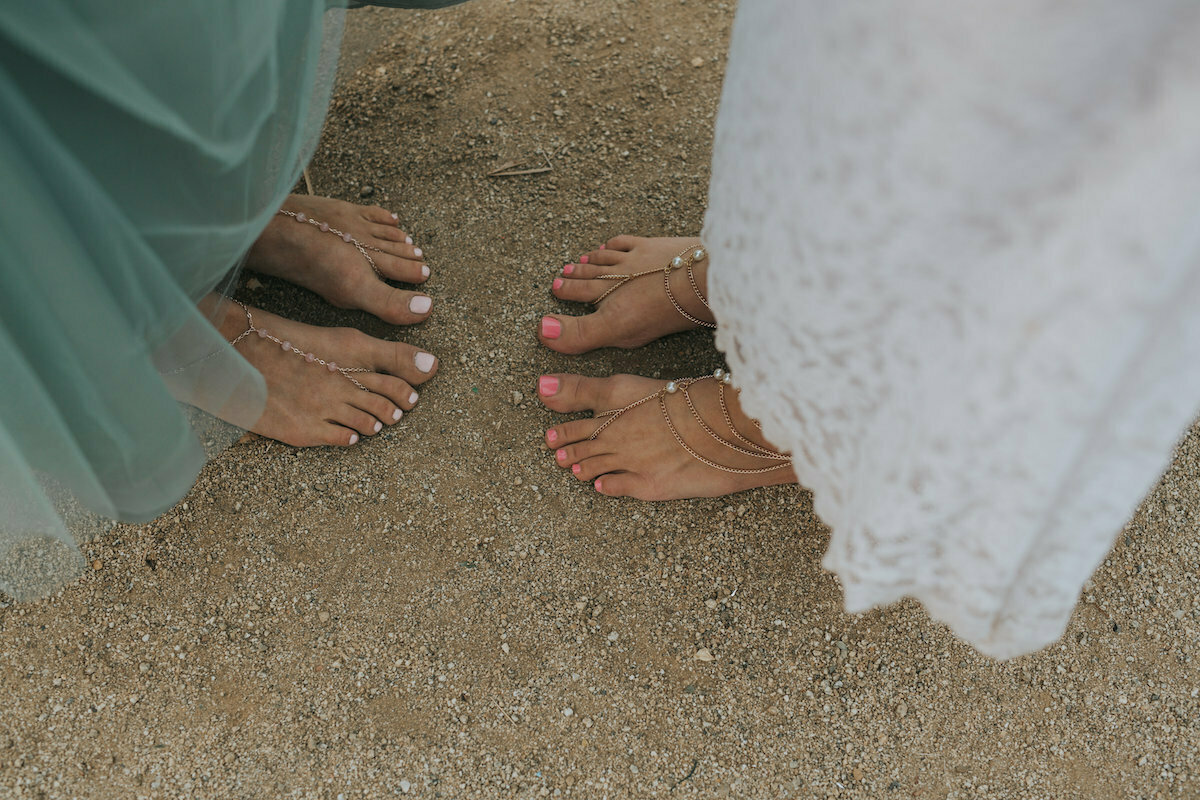 When Anna was nine, she’d decided that her centerpieces would be rustic bowls with floating flowers and candles and that’s exactly what she had. This was the only detail that she used that was part of her childhood vision of that perfect day. She’s incredibly grateful to her mom, who designed them, because they turned out exactly how she’d always pictured them.

Cake tasting was one of the couple’s favorite parts of the planning process. The wedding cake was a red velvet naked cake with a cream cheese frosting. Both the cake and the catering for the event were beyond delicious and thoroughly enjoyed by all.

At one point during the day, the photographers took the happy couple and bridal party into a field to do a shoot. Anna and her bridesmaids were all barefoot and they soon discovered the ground in the field was prickly and painful. Mike offered Anna a piggyback ride and it was only a matter of time before every bridesmaid had paired up with a groomsman to receive the same service. One couple even took a tumble; it was a hysterical experience which none of them will ever forget.

Readings were not of the traditional kind. As you know, the couple’s CEO officiated

Readings were not of the traditional kind. As you know, the couple’s CEO officiated…now; he took it upon himself to request a gem of wedding advice from each family member, which he then related at the ceremony. It was both touching and hilarious, such a brilliant idea!

The couple chose to write their own vows and Anna warmly remembers this snippet from the end of Mikes vow to her: “

“I promise to continue to be the person you fell in love with. I will always put you first, and try my best to make you laugh and smile. I will always make you feel safe, secure, and comfortable. In doing this, I hope I can make you feel even half as good as you make me feel. I love you.”

Mike’s favorite was when Anna explained that he had a tendency to make her laugh so hard that she usually became quite self-conscious about it. 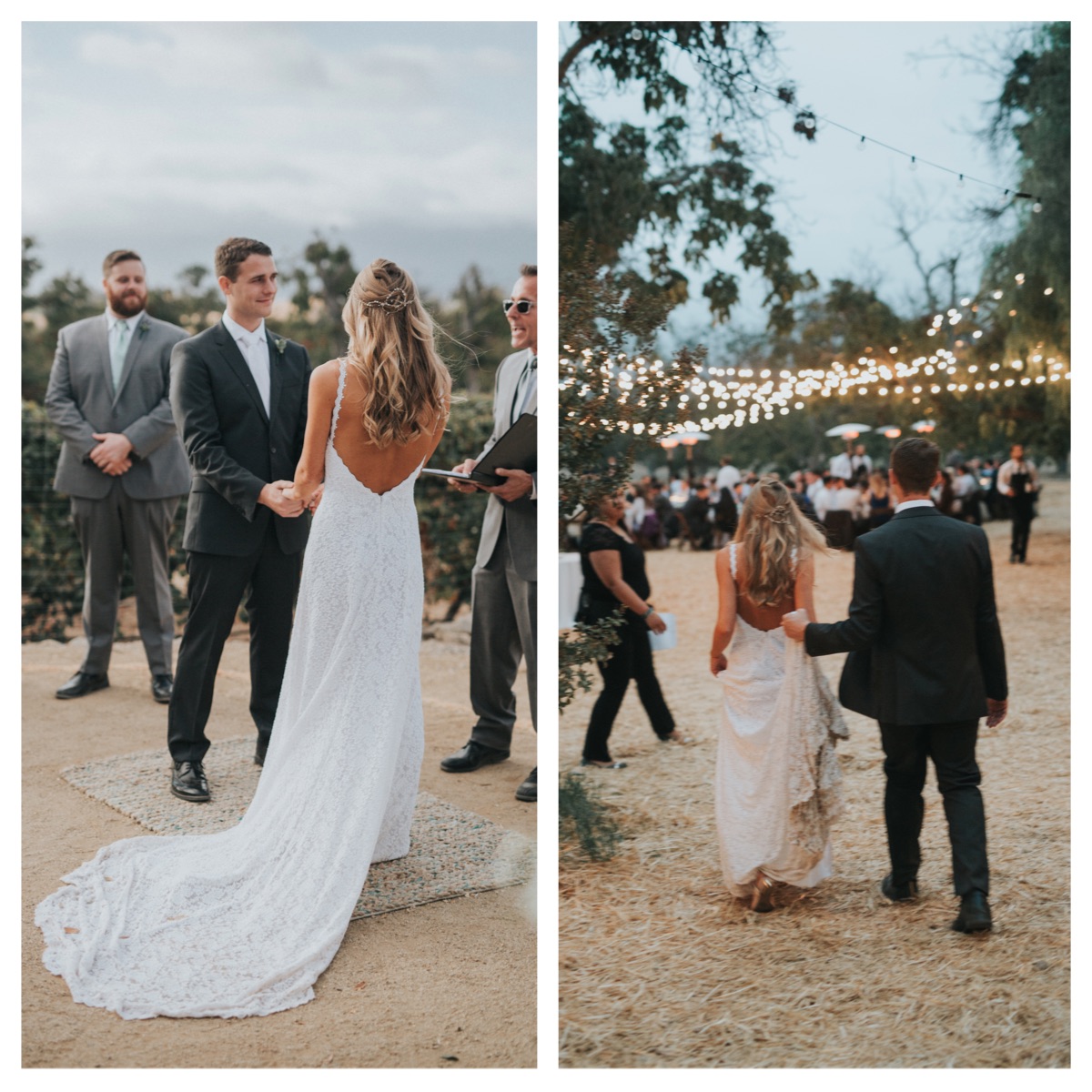 The only challenge they encountered in the planning was the fact that they didn’t realize that their day coincided with a popular local fair, for which the streets were closed. As you can imagine that made transport somewhat difficult and also meant that hotel rooms weren’t easy for the guests to find. An outstanding shuttle service and a few strings pulled though and the event were a great success.

Anna’s advice to other boho-brides is that it’s your day and you can do whatever you want, you don’t have to do something just because it’s tradition. The couple made no grand entrance or exit, as it just didn’t feel authentic to them. Make sure your family and friends know to stay close on the day of the event…they will ground you and keep you centered!

So what’s next for the couple? They have plans to buy a house soon but otherwise they’re just relishing their time together as a young husband and wife. Little ones are on the cards but likely only in the next five years or so. We wish them many a romantic summer and many a wholesome, homely winter, together with all the love they can possibly bare! 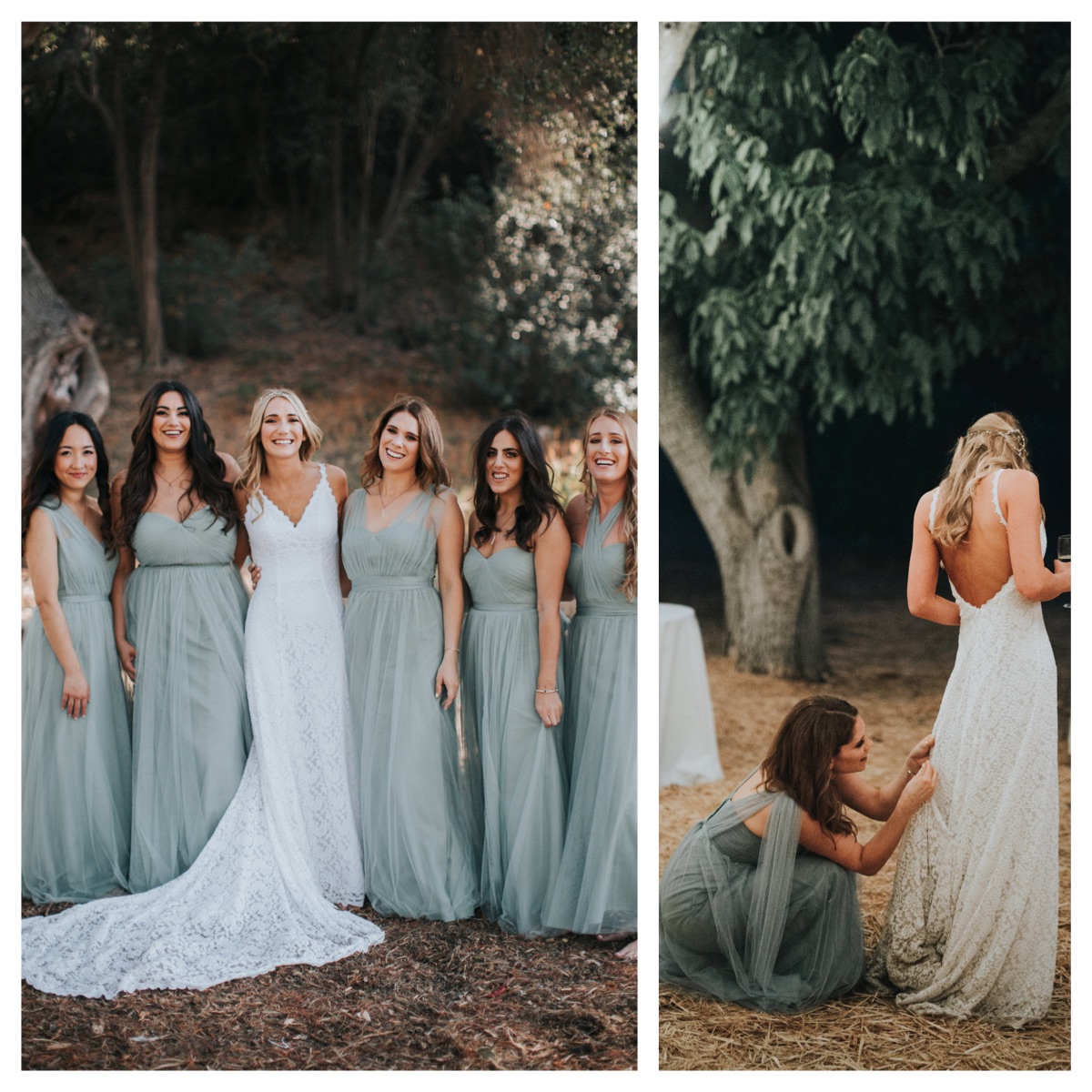 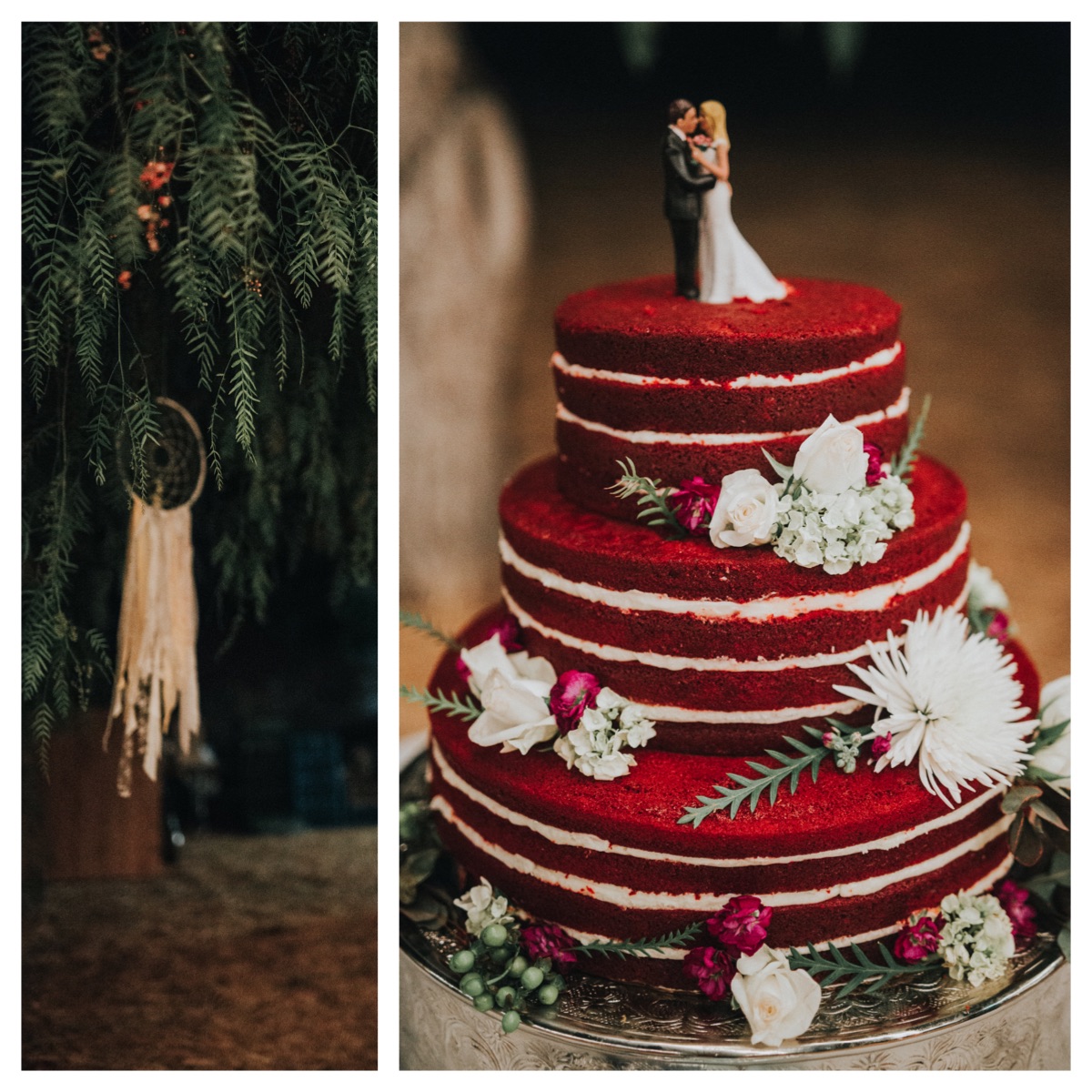 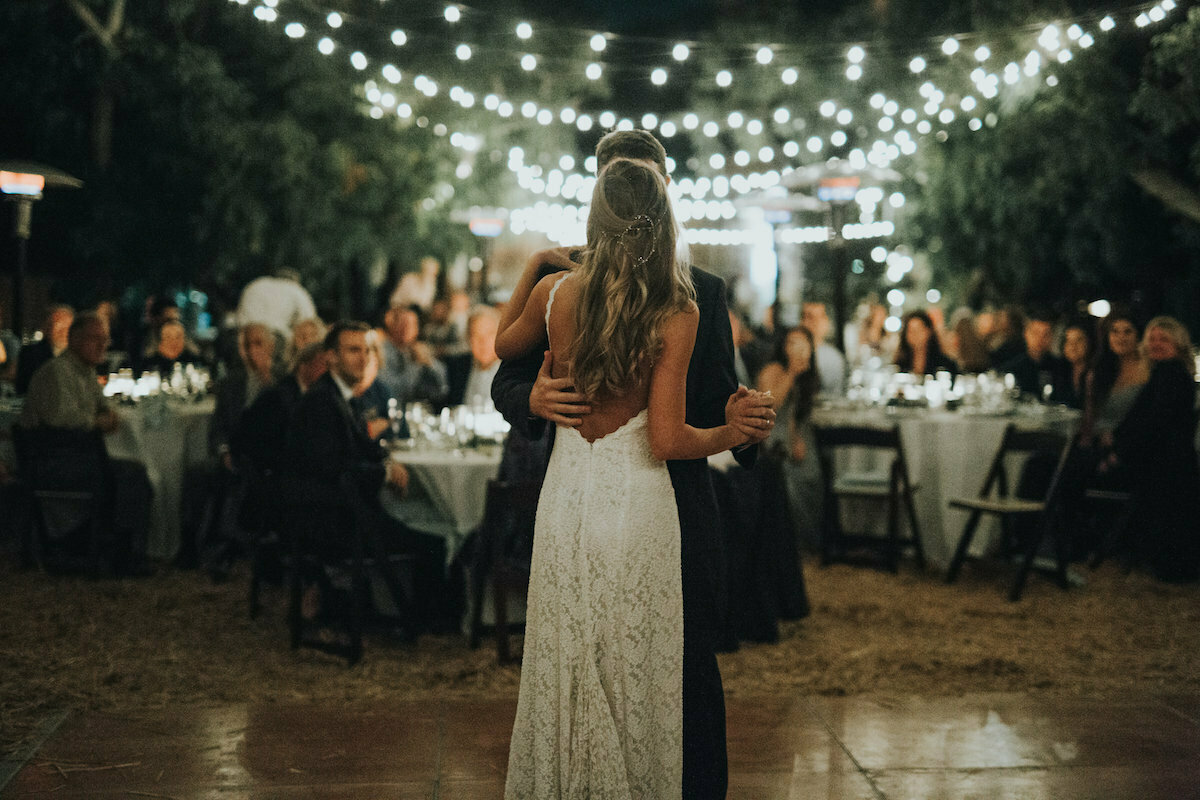 To see more bride’s wearing the Amber, see Alexis California Wedding and see it in this California coastal setting here