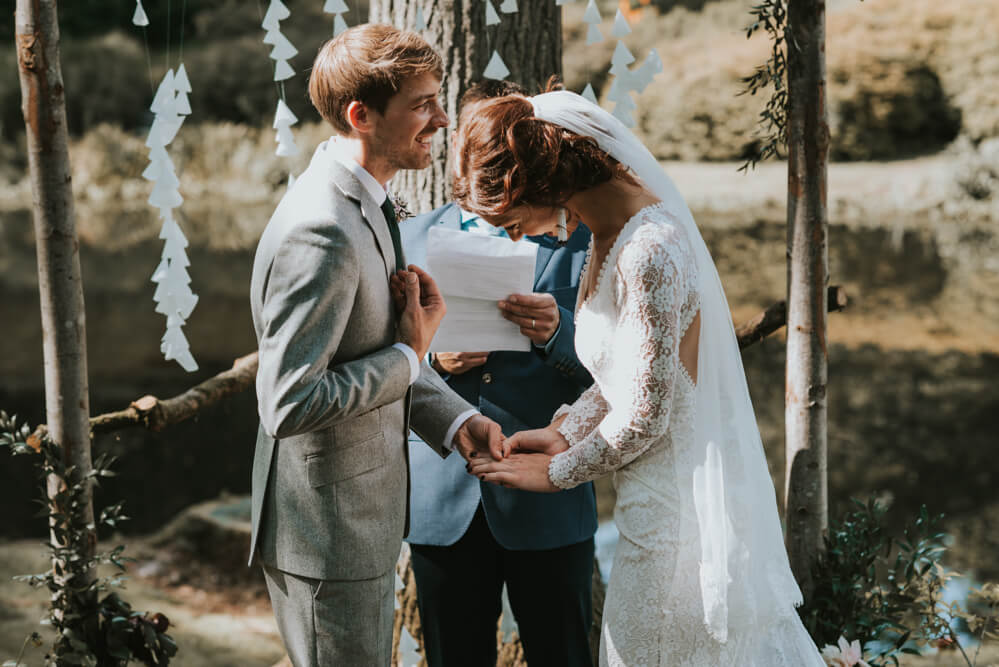 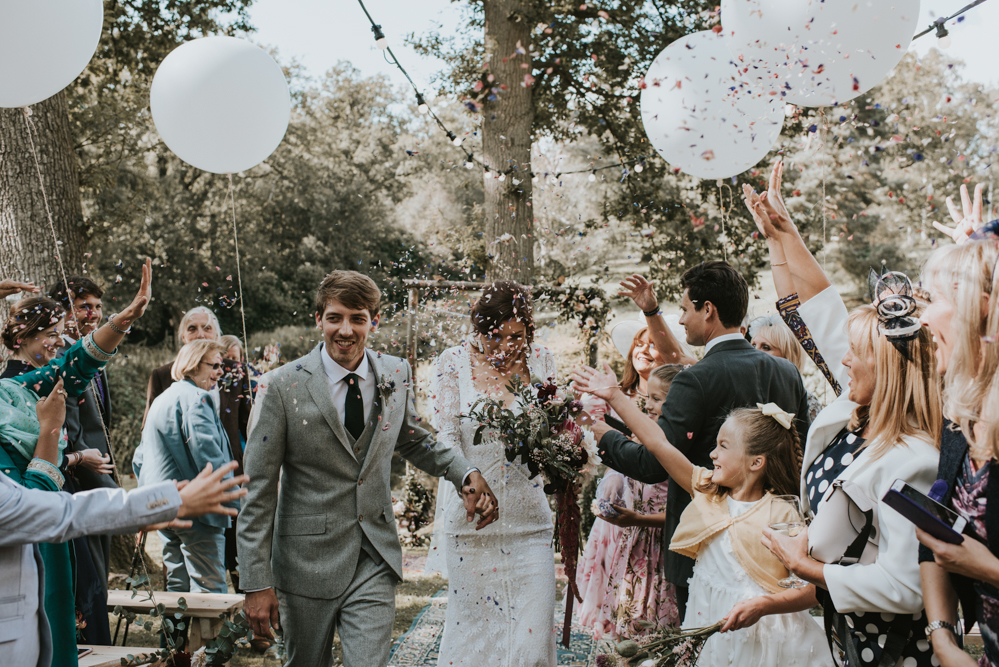 I’m inclined to think of rustic or vintage boho as very much an American thing but our beautiful D&L bride, Lauren, and her hubby, Nick, are here to prove that moody vintage and rustic boho weddings go down just as much a treat in the chilly UK and judging by these gorgeous pics, the genre feels right at home…. anywhere in the world!

When it came to picking the perfect dress, bohemian goddess, Lauren, had already run the gauntlet of boutique appointments but with no luck. Lucky for her, she’s an Internet savvy diva and came across Dreamers and Lovers on one of the many wedding blogs she followed. Obviously skeptical about ordering online, Lauren requested 2 sample dresses for the home try-on, one of them being the lovely Valentina boho wedding dress. 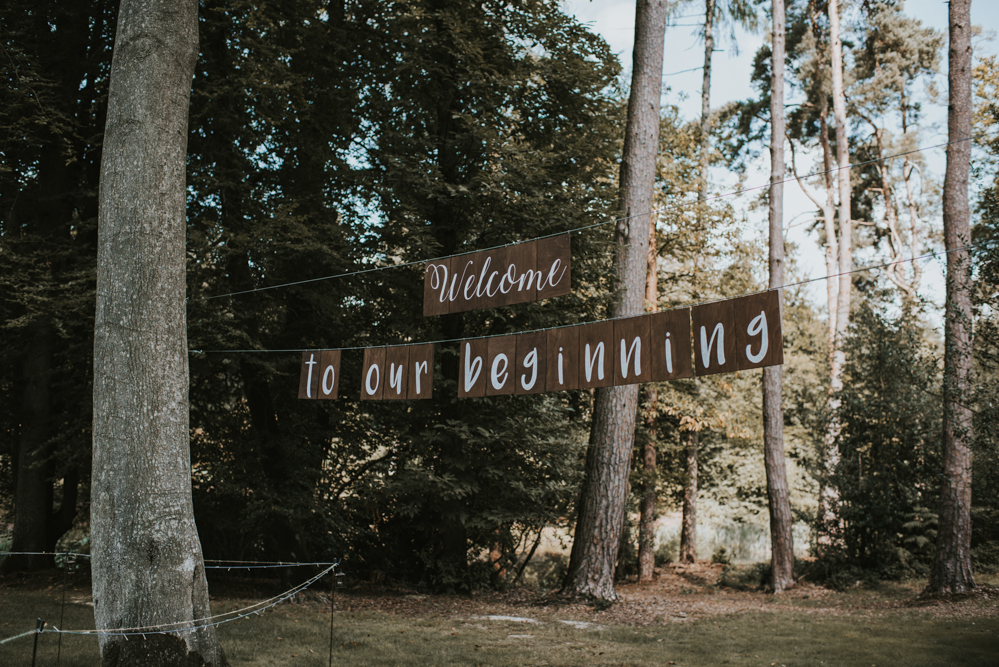 She instantly knew it was far more her style than any of the boutique try-ons and she sent in her measurements, along with a request for a few customizations. Lauren was swept away when it arrived, with add-ons, perfect to the last stitch and fitting like a laid-back boho wedding gown glove! She was absolutely pumped about having something that wasn’t readily available in her area and even more excited by just how chill and comfy she felt in it the whole day!

The bridesmaids were all shapes and sizes, including Lauren’s preggo sister-in-law, so they opted to match the floral pallet as near as dang and ordered a selection of boho bridesmaid dress styles from ‘Boohoo’ and ASOS’ online. Even the groom opted for the online route, sending his measurements in to Oliver Wicks for his sexy threads. 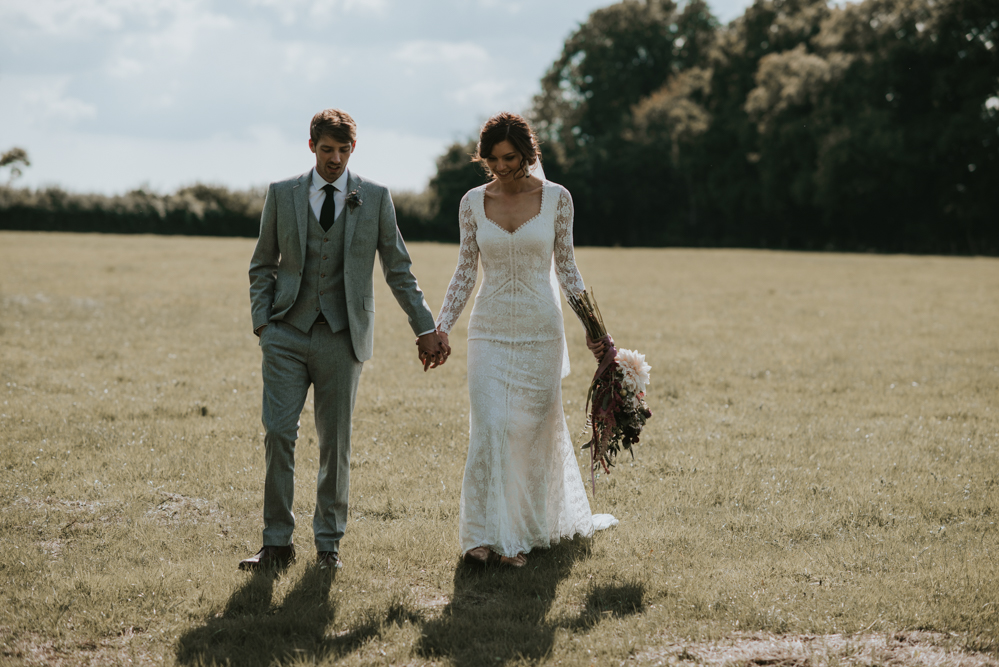 Their Dreamy Outdoor Venue – Perfect for a Bohemian Bride + Groom

Now, both Nick and Lauren knew that a run-of-the-mill wedding venue just wasn’t going to cut it for them…as serious lovers of the outdoors, their dream had been a woodland wedding but being in the heart of England, they had to consider, weather, access and protecting their beloved guests from mudslides and frostbite (lol). Luckily for them, Nick discovered the Wild Garden at Hyde Estate in West Sussex online, a large pond, plenty trees and a labyrinth of picturesque little bridges were more than enough to capture both their imaginations. 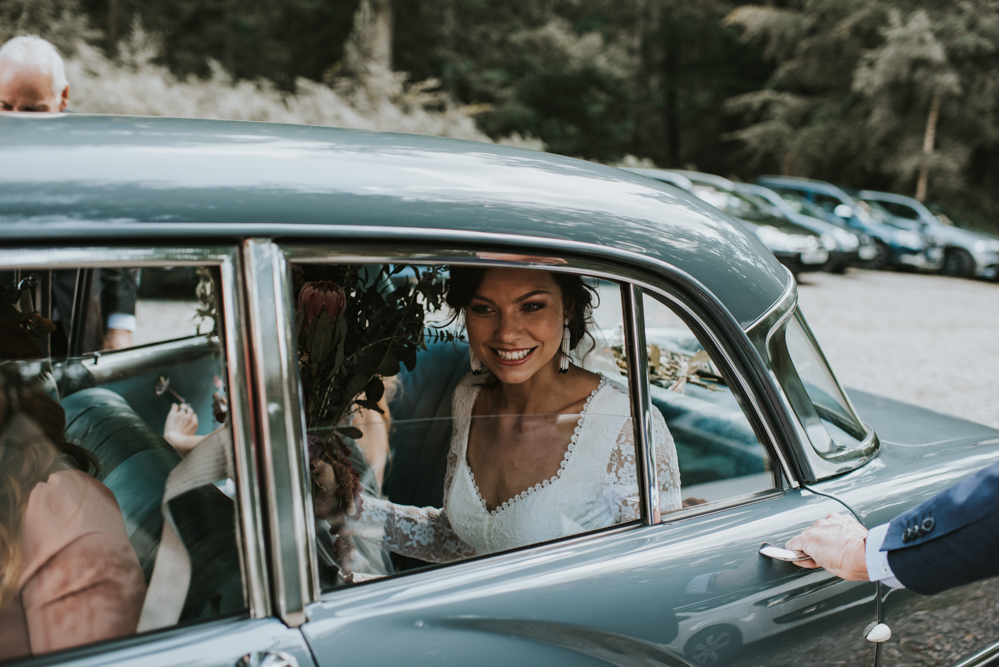 Lauren and Nick weren’t about to let the details slow them down either. The venue wasn’t licensed, so they finalized all the legalities at Guildford Registry Office a few days prior, who allowed them to have Lauren’s Uncle Glen marry them on the day, as special treat as he put together all the best bits from Internet ceremonies and the couple wrote their own vows! Undaunted by the lack of ablution facilities, they hired loos! They even hired a generator, since the venue had zero power!

They rented a couple of giant white teepees from Makatipis, complete with mirror ball, lighting and dance floor. Indeed, everything had to be rented… tables, chairs, crockery, glassware…one thing was certain, this DIY boho wedding turned out a little more expensive than expected, what with all the extras made necessary by the unique venue but y’ know… even though they’d expected a manor house wedding with all the necessaries included to be the pricey option, it was all well worth it in the end!

Now, in spite of the fact that the Wild Garden venue was beautiful in and of itself, this boho bride had been keeping a sneaky Pinterest wedding board for years prior to the proposal, you go girl!! Meaning, there was a wedding vision well in place, a boho décor vision as well and, come hell or high water…those visions were going to be met! There was to be a vintage/DIY/botanical theme and the couple, who share the same tastes, had to scour a good number of car boot sales before the time to gather all the bits and bobs they needed. Some things were also bought on Gumtree, while others were bought new. 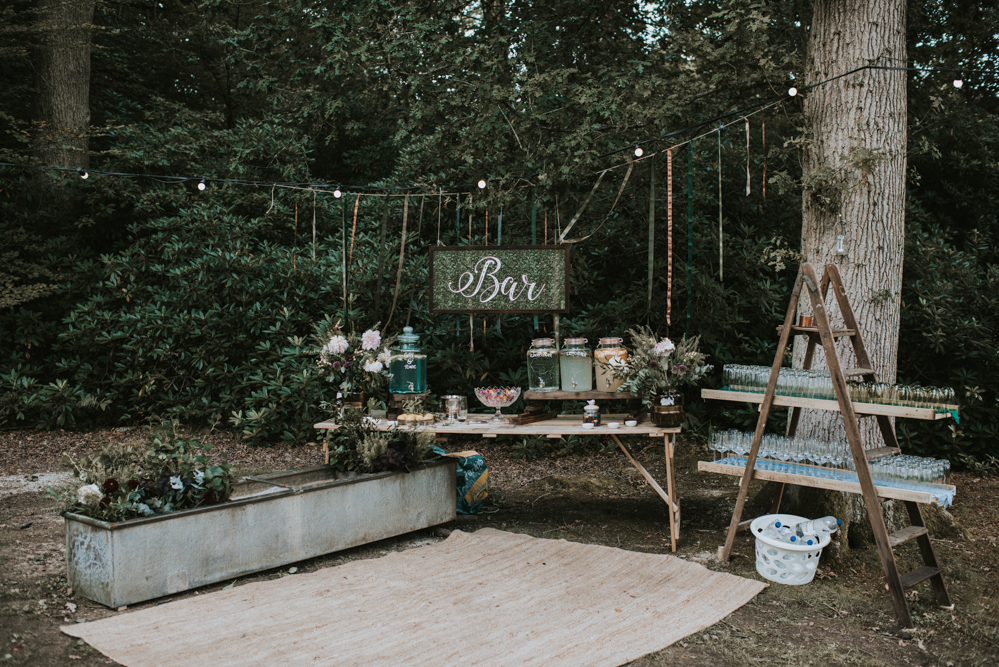 The venue was split up into sections, which made it more interesting for the guests to sit or stand around and chat in different sections or explore. They had a bar area, with a borrowed drinks trough and everything displayed on a table with big drinks dispensers. Nick made a big ‘Bar’ sign and a clever ladder with shelving to keep the glasses in!

For the chill out section, a green leather chesterfield couch was found on gumtree, as well as a convenient bar trolley!  Creative Nick even made the dream-catchers himself! The pair made a ‘family-tree’ with old family pictures as a tribute to family members who’ve passed on. And speaking of trees, they used a natural aisle of trees for the ceremony and lined it with glass flagons filled with flowers and with giant white balloons tied to them, all signs were hand painted on stained plywood and doors, benches and archway were crafted by DIY extraordinaire, Nick! 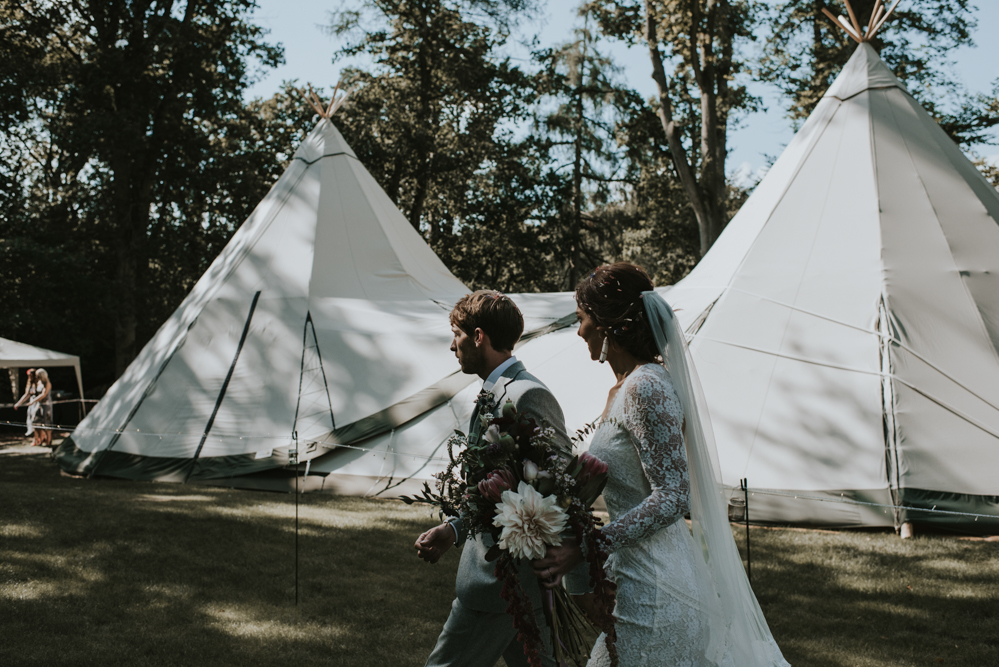 Remember those tipis they hired, well, those needed decorating and they were pretty big! Luckily for the couple, their family members were feverishly engaged in setting everything up a few days prior. They had giant clear balloons filled with confetti and ferns hanging from the tipi apices, one of which popped during a speech, showering confetti all over the place, unplanned but seriously cool!!!

They had long tables full of flowers for the sit down meal, the table setting had been planned in advance, so they knew what they wanted on each one. They had collected lots of old jars, bottles and vases of different sizes and colors to put flowers in, as well as little terracotta pots filled with wax flower and eucalyptus. The tea light holders were jars from Nicks parents that Lauren had painted gold, while table names were vintage bird postcards from Etsy set in little Rose Gold wire stands, also found on Etsy. 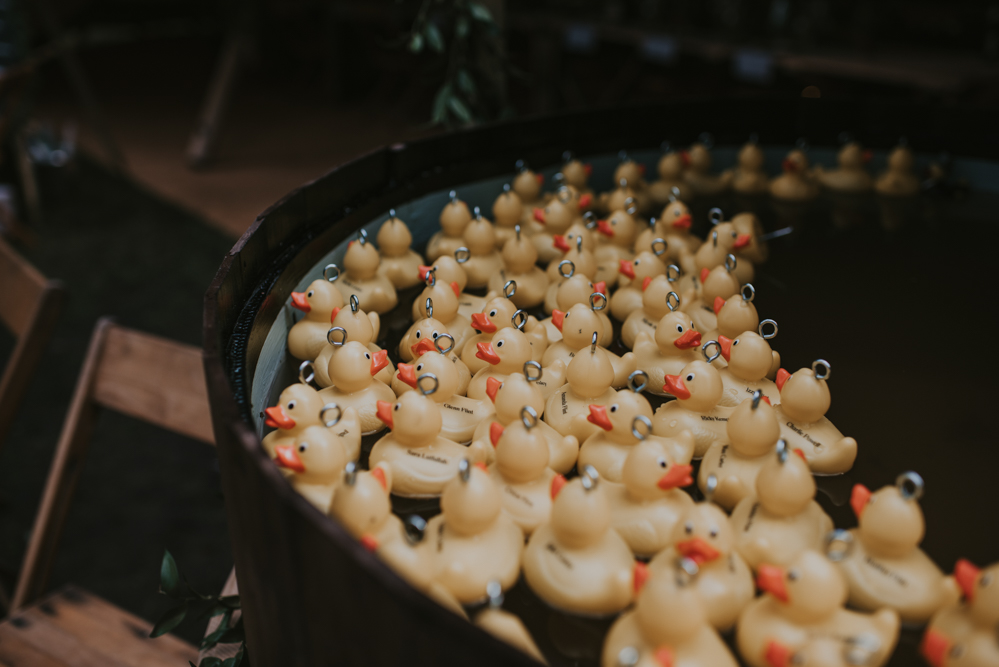 To get the party started, Nick came up with the idea of playing ‘Hook A Duck’ to find your seat…they found their ducks online, wrote the bird names on the bottom and stuck guests names on top. Nick made a huge barrel for the pond and he also made the sign, Nick turned out to be seriously handy, and handsome as well…score! Not only did the game help folks kill time during photo hour, it broke the ice and guests had crazy fun doing it! 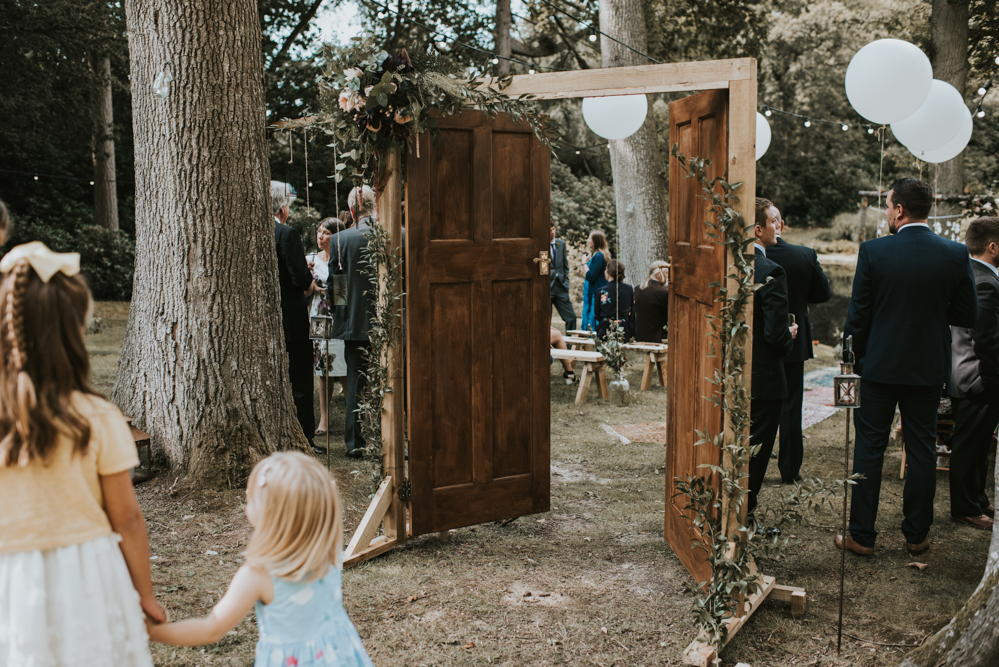 When it came to the all important floral aspect, the couple knew they were already spending a lot and that florists can be seriously pricey, so they ordered all their own flowers and foliage and did all the arrangements, centerpieces and bouquets themselves, with the help of Becky the bridesmaid for bouquets and flower crowns! Lucky for the ladies, the hen-do had actually been a flower crown-making workshop so they didn’t have to count on the Internet for all their how-tos and inspiration!

Speaking of Becky, who is also Lauren’s cousin…, she turned out to be hella useful during preparations as she also happens to be a professional make up artist  who even works on West End productions in London. In between her London shows they got together for a little trial with Lauren showing some of her favorite hair and make up Pins. While Lauren isn’t big on make up, she trusted her cousin to get it just right and that’s exactly what she did on the day, with a bunch of giggles to boot. When the gals were ready, Nick surprised them with a vintage car pickup from the hotel to the beautiful venue! 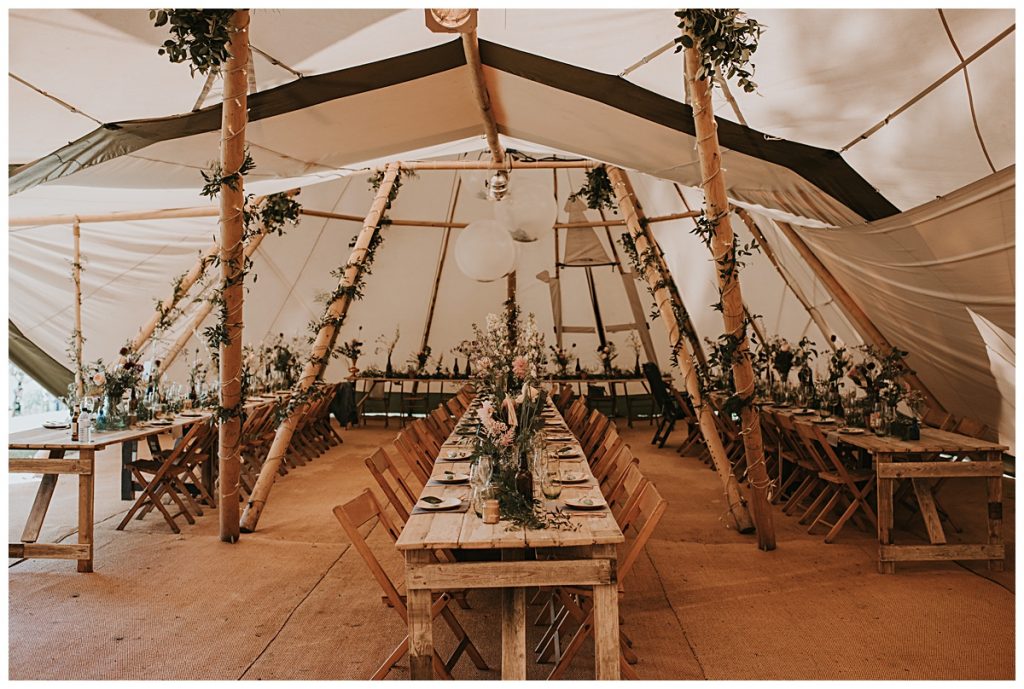 Food was a vegetarian BBQ (since Nick is a vegetarian), courtesy of Jonathan’s Catering near Cirencester, although it was a sit down meal it was served buffet style, with folks getting up to dish by table…which added to the relaxed atmosphere. Everyone enjoyed the munchies and Jonathan managed to get all their requests in within budget!

The gorgeous 3 tier, blueberry and lemon sponge cake with ombre icing, gold leaf and edible flowers was thanks to the baking talent of Nicks own brother, Dom……They were, of course, thrilled with the result! 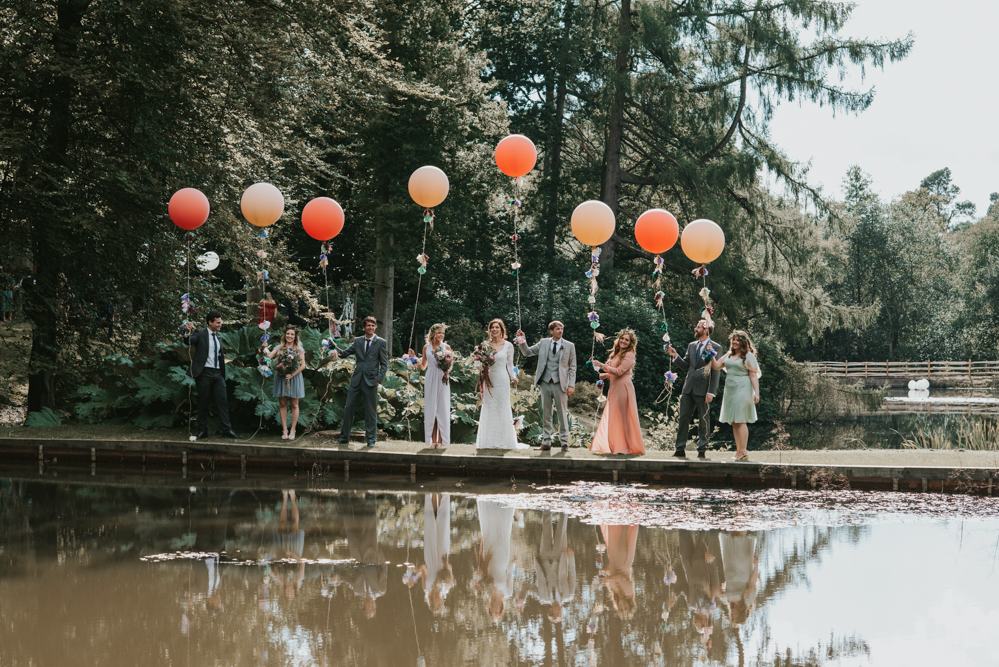 So you see, with a little help from friends and fam, a handy hubby-to-be and some original thinking, you can turn even the most unequipped venue into the perfect boho-wedding spot.

We wish the stunning couple all the best and decade upon decade of love and laughs to come!

Check out this other amazing UK bohemian wedding we just looove.